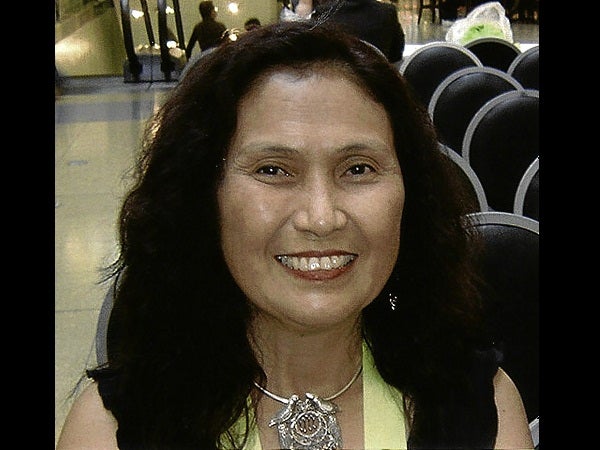 A literary homecoming for Cebuana writer

It was a cool Sunday afternoon and many did forgo a prolonged siesta to attend a book launching at 2:30 p.m. at Salon Granada of the Casino Español de Cebu. Such a crowd could only be attained by celebrated Cebuano writer Cecilia “Baby” Manguerra Brainard with her ninth title, “Out of Cebu—Essays and Personal Prose.”

The event was under the aegis of the University of San Carlos (USC) Press, represented by university president Rev. Fr. Isidro Miranda SVD, and heritage writer Jojo Bersales, who was first to speak during the commemorative program. He said it was the first time USC Press was publishing a book by Ms Brainard.

The 28 essays in the book are about her family, the prominent Cuenco political dynasty, as well as life in Cebu, in the United States where she has lived since 1969, insights during her travels to different lands, and day-to-day impressions wherever she may be.

Maria Cecilia Cabañes hosted the program in which first to read from the book was Louie Nacorda. He chose “My Grandfather,” a biographical portrait of the author’s grandfather, erstwhile President of the Philippine Senate Mariano Jesus Cuenco.

Mayen Tan read “Death of a Carnival Queen,” which is about the author’s mother, Concepcion Cuenco Mangeurra, Cebu’s Carnival Queen in 1932. Decades after that people in Cebu were still talking about the splendor of her coronation.

Leodenito Cañete chose the first essay in the book “Where Daydreaming Came From.” The autobiographical piece describes the years since the author’s birth to early childhood.

Pia Mercado’s piece was “Diaspora in Italy,” which tells the vicissitudes of a Filipina overseas worker. It has quite a suspenseful plot, thrilling in some parts. The happy ending is an amnesty for TNT workers.

Gavin Bagares had helped drum up interest in the book launch, and he had a part in the program of readings. He chose “Kiki,” whose heroine is the Brainards’ pet cat. He didn’t read all of it, for as he said,” I want you to buy the book and find out how the story ends.”

The readings closed with Fr. Jun Rebayla, who opted for “Museo sa Sugbo—A Story of Hope.” Yes, the article is about the museum, but also that it was once the provincial jail where a maid of the Manguerra family was detained for stealing.

No need for introduction

Now, it was time to introduce Baby Manguerra Brainard who, as Jojo Bersales said, really does not need it. There she sat on a raised dais, a pile of books beside her, ready to sign those autographed copies.

She thanked Cebu City Mayor Michael Rama for his presence, and the USC Press for printing her book, stating that she looks forward to more projects with them. She was most grateful for the large turnout of family, friends, writers, members of academe and media.

About the book, she explained that it was “an accumulation of what I have published, now gathered in one collection. Given the easy flow of her writing, and her keen power of observation, it was suggested that she write her memoirs of life in Cebu, and beyond it.

Perhaps something like her essay on “Leche Flan.” It is a hilarious recounting of how she met the man who’d eventually become her husband, Lauren Brainard. “In 1996,” or was it more like 1967? He was then a Peace Corps volunteer in Maasin, Southern Leyte.

Baby had met Lauren months before he came to Cebu and was hospitalized with a festering wound in his leg. She and some friends (I was among them) went to visit him, and Baby thought of bringing a leche flan made by the family cook, Menggay.

Although she doesn’t say so in the essay, the trembling custard almost fell on the patient, but any way, it was duly tasted and praised. Somehow, Lauren always believed Baby had made it. Lauren left for the US, and some time later Baby met him in San Francisco where he was studying Law.

They fell in love, got married, and Lauren always reminded her about the leche flan she had made for him. “I never said I had made it,” Baby insisted,, but as she tells it in her story, she learned how to make one, with a half gallon tin of Magnolia ice cream (as it used to be in many households of the time).

Also as the story goes, she has treasured the recipe, perfected it even, and learned various versions of leche flan according to how it is made in different countries she has visited.

Lauren and Baby make their home in Santa Monica, California. They have three sons and several grandchildren. Baby comes to Cebu twice a year. First during Sinulog time in January for the fiesta of the Santo Niño. Then for the June 24 fiesta of St. John the Baptist in the old Parian area.

That is where she lives, in the top floor of a building she inherited from her mother. The neighborhood and its lore have inspired her ever since she began writing short stories and novels.

They are somehow interrelated and reflective of incidents that have found their way into the legends of mythical Ubec, which is Cebu spelled and pronounced backwards. “Binali,” as they say in Cebuano.