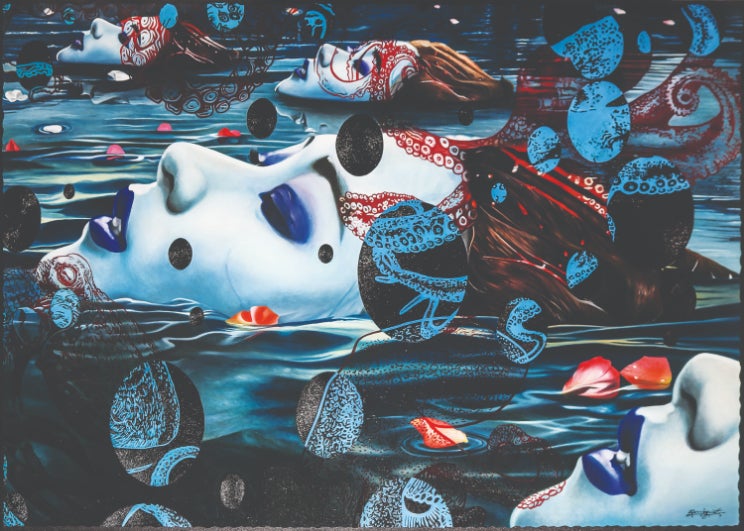 “As we slowly but surely surface from the COVID-19 (new coronavirus disease) crisis, innovation is the key,” declared León Gallery director Jaime Ponce de Leon. “And so are the works of the country’s innovative young artists.”

The excitement owes to “a well-curated mix of both old masters and important contemporary paintings,” said Ponce de Leon.

Aside from visual arts masterpieces, the auction will include historic books and memorabilia as well as select ivory and silver.

Among the featured artists is rising abstractionist Zean Cabangis. His distinct style of abstraction with attention to detail is showcased in his captivating work, “Before We Leave.”

Another highlight is sought-after artist Marc Aran Reyes’ mural-sized “The Audacious Future,” featured in the artist spotlight at Art Fair Philippines 2017. This is a meditative yet powerful piece, thought-provoking at best, striking calmness and emotion. Waiting list for one of the elusive artist’s works is said to be three years long.

There is the brilliant play of light and shadow and a draped form coming to life with Dino Gabito’s focus on shape and character in “Shroud #1,” from the exhibit “Tenacity” in 2011. Not your ordinary Filipino artist, Gabito has already been widely recognized since his early 20s, having held various shows with sold-out pieces. At a young age, he has found his signature style with his art of drapery influenced by shrouding in which covered subjects extend beyond the frame’s borders.

Andres Barrioquinto’s technique, inspired by the ukiyo-e or Japanese woodblock prints, is reflected in his painting of whimsical, dreamlike rendition of women’s faces floating in water, embraced by tentacles. Receiving accolades in this country and abroad, Barrioquinto was one of the recipients of the Thirteen Artists Award from the Cultural Center of the Philippines in 2003.

Mark Justiniani is once again in the spotlight. His massive immersive installation graced the 58th Venice Art Biennale and placed the Philippines in the top-five must-see pavilions—a crowd favorite that created a buzz among viewers and the media on a global level. Justiniani’s “Spectator” invites the viewer with its visual narrative of a coronation in front of an audience composed of famous personalities and iconic movie characters. Part of the mystery and fun is figuring out who they are. This piece shows Justiniani’s genius as a multitalented artist.

Ronson Culibrina is represented by his attention-grabbing riffs on famous pieces from Juan Luna and Fernando Amorsolo’s “En el Palco” and “Under the Mango Tree” (1952), respectively. His “Culture Jammers Under the Mango Tree” and his Luna commentary are unique shifts between traditional and present-day modes of expression. These give viewers striking narratives of both past and present familiarities. It is his unusual approach to classical artworks that has made him lauded by many.

Also included are the works of celebrated artists who paved the way for the next generations of artists, such as the masterpieces of renowned abstractionist and printmaker Romulo Olazo from his Diaphanous series, “Diaphanous No. 777” and “Diaphanous – Anthuriums No. 3.” Olazo’s works are indeed lasting contributions to Philippine abstraction, with its translucent forms created through his distinct artistic process.

The art of abstractionist Lao Lianben, one of the artists best known for the meditative silence reflected in his works, is timely in the current times. Art collectors are up for a serene Zen-like experience with his “Tryst 7” and “Monk’s Table,” also his other works in the catalog that lead one to embrace stillness. Another work that displays his signature minimalism, “Zen Garden,” is a recreation of the Japanese rock garden’s features that help one in arriving at clarity of thought and inner peace despite reality’s distractions and noise.

These works, all in all, give us moments of a refreshed perspective of the world around us.

León Gallery’s “Spectacular Mid-Year Auction” will be copresented by ANCX.ph, the urban man’s guide to culture and style, the online lifestyle website of the ABS-CBN News Channel. —Lito B. Zulueta