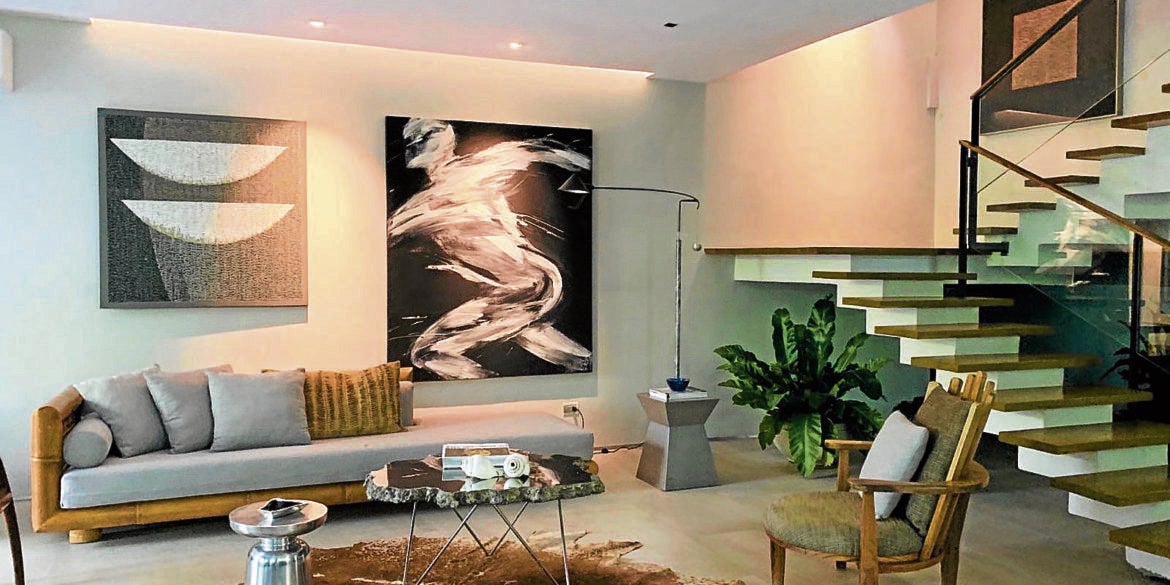 Airy living room is like blank-canvas setting for Budji Layug bamboo furniture and black-and-white painting of figure in motion. The other painting (mixed media) is by his sister, Jo Layug Loignon.

No walls to confine or divide, no low ceiling to impede the air flow, no décor to serve as eyesore

It wouldn’t be an exaggeration to say that the quarantine was made for Budji Layug, or the likes of him. This is because this artist who’s made his name in home design has a way of tuning out, and is most comfortable doing it. He loves tuning out.

All these years he’s told us how he’s loved the challenge of planning and designing spaces. He loves a vacuum. And he doesn’t believe in filling up empty spaces. He eschews decorative efforts. So it is a blessing how the quarantine has allowed him to cocoon in his own space.

It’s a space marked by solitude, introspection and the act of painting. It is his personal space.

Friends like us couldn’t help but poke our noses—virtual noses—into that private space as we see his social media posts of it. We simply got curious about Layug’s quarantine home.

In the center of Metro Manila, it is three stories, on a 500-square-meter lot—“perfect for good exercise, climbing up and down the stairs,” he says in our phone chat.

On the rooftop is the garden where he greets the sunrise. “At around 5:30 a.m., just before the sun comes out, I sit there with my cup of coffee, read books, and do my meditation.

“It is basically in thanksgiving, to help me focus on the positive side.”

To be up before sunrise is the opposite of the early lifestyle of this man who’s been one of the country’s lifestyle-setters since the ’70s, in the party scene, with his name immortalized in one of the OPM hits. He must be the only one in the local design scene whom people know by his first name, thanks to the pop song he’s not really eager to remember.

In contrast to those swinging years, Layug has dropped out of the social whirl, and with architect Royal Pineda, in Budji+Royal Design firm, has devoted the past decade to major private and government projects (e.g. Southeast Asian Games sports pavilions, local and international airports). In this pandemic their firm is at work on the design of public spaces—“transition design” for the new normal that demands physical distancing.

Even before the pandemic, Pineda has espoused the timeliness of “connectivity” in design—the need to build bridges to connect the archipelago.

In his rooftop garden, however, Layug is removed from the demands of his profession. He’s in a rock garden laid out with pebbles, with potted plants, bonsai, bougainvillea, mahogany trees for shade.

A stairway down from the garden is his studio where he paints most of the day. Not known to many, Layug has been painting for as long as he’s been in architecture and design. I had the curious experience many years ago of meeting a visitor from Hong Kong who asked if I knew “this artist” and gave Layug’s name, whose painting he had bought. Surprised, I told Layug that he had a collector in HK. He was surprised himself at how it landed in the hands of that expat collector.

Layug doesn’t actively sell his paintings—they are his spontaneous form of self-expression. In acrylic, he paints as the moment moves him—swirls and lashes of human figures caught in movement, or landscapes taking shape in his mind.

“At least these days, it’s turning out the way I like it. They’re spontaneous emotions of movements,” he says.

These days, he does black-and-whites. “It’s the movement that is very important. It’s more an expression of movement, rather than color.”

It is his landscapes that bear color—water, sky, “expressed how it is in a modern way.”

Layug now spends his days painting, and teleconferencing with his staff.

He has time to do and redo his so-called quarantine space. It is a signature Budji Layug home, done in tropical modern style—warm minimalism, with the judicious use of wood and local resources set in blank-canvas concrete and uncluttered glass.

It is an open layout where social spaces flow into each other, wrapped in panoramic glass that lets in the view of the great outdoors. The furniture was designed by Layug. It must be remembered that his career as furniture designer took off in the late ‘70s when Bloomingdales in New York exhibited and sold his now-iconic bamboo furniture. His bamboo furniture line holds the distinction of having been the longest display at Bloomingdales.

The ground floor is the social area for family and guests. It has the living, dining areas, and the open kitchen.

The second story is all of the master bedroom, with a walk-in dressing room.

The third story, which houses his studio, doubles as guest room, with a balcony. It has a stairway to the roof deck.

Typical of a Layug design, this home is a breathing space whose design follows logic and intuition. There are practically no walls to confine or divide, no low ceiling to impede the air flow, no décor to serve as eyesore. Cozy minimalism marks a Budji Layug space.

In this space, solitude has calming effect.

It was thus with a calm, positive mindset, even in this pandemic, that Layug celebrated his birthday in this place two weeks ago.

You must feel 35, I told him on his birthday.

“Yes, looking forward to my 40s!” says this senior citizen. Calm yet with a hint of action.