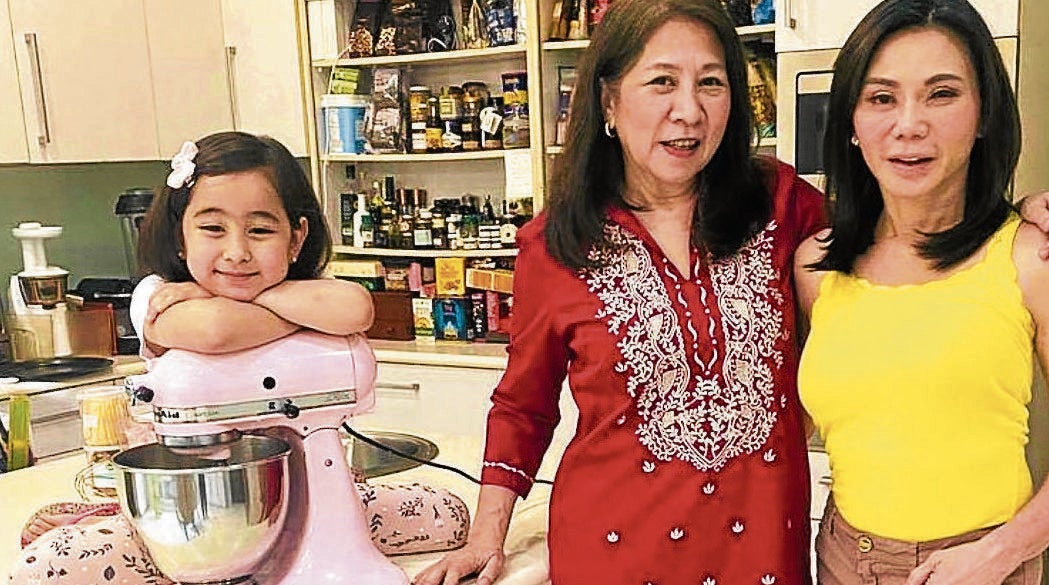 Whenever I go for treatment at Belo Medical Group clinic, I make it a point to grab a foil pack or two, sometimes three, of the bars in their cookie jar. I’ve always found them so good.

The butterscotch reminds me of the kind my mom would buy when we were kids. The brownies are also the good, old-fashioned kind.

I learned that they are baked by Dr. Vicki Belo and Liane Bautista, the ladies behind Scarlet’s Sweets.

Besties since they were 9 years old, Vicki and Liane have shared the passion for baking cookies and cakes. They say, “As much as we love making them, we love eating and giving them away, too!”

There are many facets to Vicki. Away from the glare of media coverage, she’s like any one of us who dabbles in the simple pleasures of dance, food, cooking and baking.

Having a sweet tooth with a love for chocolate, Vicki started baking as a child to satisfy her cravings. She was influenced by her mother, Nena Belo. Vicki used to have a bakeshop, but her dream of being a doctor became her priority.

Liane loves fruits. Her specialty as a young baker was apple pie. She likes combining lemons, berries and all sorts of fruits with pastries. Like Vicki, she loves chocolate. She grew up in a busy kitchen, which was her mother Mila Camus’ playground.

Wanting to eat cookies after a long day in school, Liane learned to make them from her mom.

Through the years, Vicki and Liane have found time to bake together. Every so often, they would ask their chef friends to teach them what they fancied. There was a time they were obsessed with macaron. After many attempts, they finally made decent ones, but then decided that it was more fun to just order all the flavors they wanted.

While Vicki focused on her dermatology practice, Liane pursued baking. But having a shop wasn’t part of her agenda. Instead, she took orders from home and was busiest at Christmas time.

In 2015, Vicki thought of sharing their baked goodies with her Belo clinic clients. It felt good to nibble on homemade cookies and bars in between sips of coffee and tea while waiting their turn. The sweet treats were a big hit and a new side venture was born.

With the arrival of Vicki’s baby, Scarlet Snow, it was only fitting to name the business after her. As a toddler, Scarlet would spend time in their little workshop and help make the cookies. Like her mom, she loves anything chocolate.

Scarlet sent me Lacey Chocolate, which has become my new favorite. In these choco crisps, the cookies have melted chocolate centers, sandwiched between ultra-thin, crisp oatmeal lace cookies. They’re delicate, sublime, sinful and so worth the calories!

The other cookie in the package were the Heirlooms, a recipe of Scarlet’s Lola Nena. The heart-shaped cookies remind me of what my own lola used to make.

Here is Vicki and Liane’s Crispy Oatmeal Cookies recipe, which they suggest you have with a cup of coffee.

In a mixer, cream butter and sugars. Continue whisking until sugars have dissolved and the mixture is light and fluffy.

Scrape down sides of the bowl with a spatula as needed. Add egg and vanilla and beat on medium-low, until fully incorporated.

With mixer at low speed, mix in flour mixture. Mix just until flour is blended and oats are evenly distributed.

Scoop out about 2 Tbsp per cookie and place on a baking sheet. Press to push each dough ball down to ½-inch thickness.

Bake until cookies are deep golden brown and edges are crisp, 13 to 16 minutes. Cool cookies completely on sheet on top of wire rack.