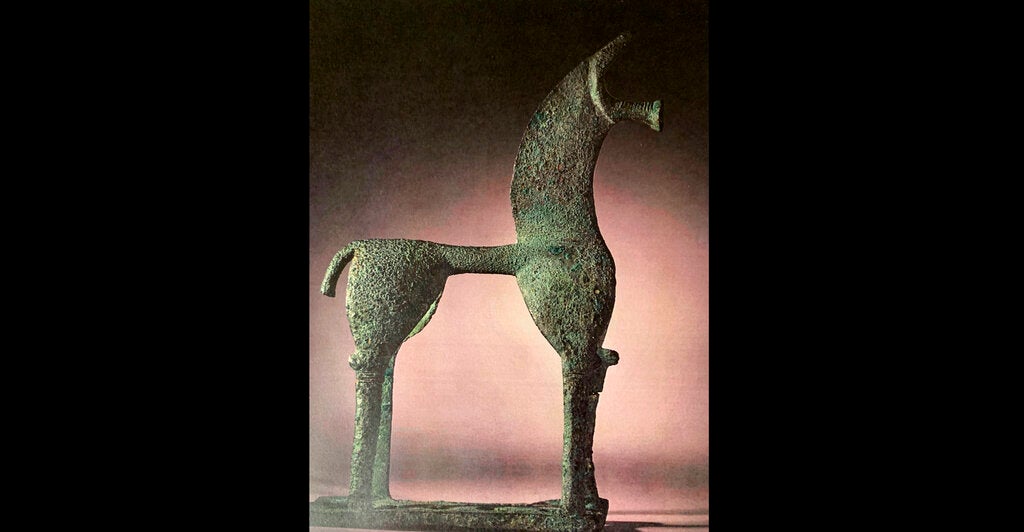 This undated photo provided by the Greek Culture Ministry on Wednesday, June 10, 2020, shows an 8th Century B.C. figurine of a horse from the so-called Geometric period of ancient Greek art that was listed for auction by Sotheby's in New York in May 2018, with an estimated price of $150,000-250,000. The Greek culture ministry said Wednesday, June 10, 2020 it will seek the repatriation from New York of a 2,700-year-old bronze horse statuette, which it says was illegally exported from Greece, after a U.S. court rejected an auction house’s bid to proceed with its sale. (Greek Culture Ministry via AP)

Greece to reclaim ancient horse from U.S. after court ruling

ATHENS, Greece — The Greek Culture Ministry said Wednesday it would seek the repatriation from New York of a 2,700-year-old bronze horse statuette which it says was illegally exported from Greece, after a U.S. court rejected an auction house’s bid to proceed with the sale of the artifact.

A ministry statement said the appeals court’s decision was of “enormous legal importance” and would have broad implications for works of cultural heritage from other countries, too.

Culture Minister Lina Mendoni said the outcome was a major victory in the fight against the illegal trade in antiquities, a lucrative but brutal business that strips ancient artifacts of key cultural and historical information that a proper excavation would reveal.

“The ministry will proceed with every legal process to repatriate the statuette, stressing that when stolen and illegally exported monuments are returned … (the country of origin) regains a segment of its history,” Mendoni said.

The ministry said the New York court ruled that in disputes concerning artifacts up for auction in the United States, or sought by U.S. museums, the laws of the works’ country of origin will be applicable.

The ministry said the ruling published Tuesday rejected a bid by Sotheby’s to proceed with the auction of the 14-centimeter- (5.5-inch) tall work from the 8th century B.C. that was part of a private U.S. collection.

The highly stylized figurine of a horse from the so-called Geometric period of ancient Greek art — a type highly popular with collectors — was listed for auction in New York in May 2018, with an estimated price of $150,000-$250,000.

Greek officials wrote to the auction house asking for the lot to be withdrawn and repatriated, arguing that it was of Greek origin and had never been declared or granted an export license.

Under Greek law, all antiquities found in the country are state property. The country has a profusion of ancient sites spanning several thousand years of civilization, but lacks the means to adequately police them all from looters.

The ministry said that while Sotheby’s did withdraw the statuette from auction, the house took legal action against Greece, seeking recognition that Greece had no rights to the work. It said Sotheby’s won a first court case but Greece appealed, resulting in the decision published Tuesday.

Sotheby’s said Wednesday that it and its client were “reviewing next steps.”

“While we are disappointed with yesterday’s decision, it does not impact what is at the heart of this matter — there is, and remains, no evidence to support Greece’s claim to ownership of the bronze sculpture,” the auction house said in a statement.