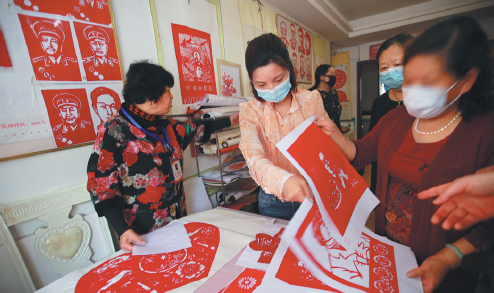 A paper-cutting expert displays her work to visitors in Yichang, Hubei province, in May 2020. Photo by Hou Jianping/China Daily/Asia News Network

BEIJING — After being in lockdown for more than two months, Wuhan, capital of Hubei province, is working to revive business and daily life, while also trying to prevent a resurgence of the coronavirus outbreak that rocked the city earlier this year.

The pandemic not only cost lives and damaged the economy, but also disrupted people’s lives and posed challenges to the fabric of society.

However, even though their world shrank to walking distance after transportation services were suspended, the people of Wuhan stood as one to fight the virus.

They shared knowledge and information, created literature, launched online educational and cultural activities, and cooperated with each other.

Members of the Hubei Provincial Committee of the Chinese People’s Political Consultative Conference also played their roles as political advisers and leaders of opinion in troubled times.

Lu Gang, a senior reporter with the Hubei Broadcasting System, launched an event called “Reading at Home” in conjunction with The Voice of Hubei radio program.

Aimed at easing anxiety and lifting people’s spirits at the height of the outbreak, the program invited well-known cultural figures to share their thoughts and recommend books to read while isolated at home.

On Jan 23, the day Wuhan was locked down, Lu, a devoted reader, posted on WeChat a rhyme about his reading plan during the Spring Festival holiday.

It was his contribution to staying safe and also hopefully not adding to the burden being shouldered by medical professionals in the city.

It was also intended to raise his spirits. “I am a native of Wuhan, which used to be a vital and busy city. I had never seen it so gloomy. It touched me a lot, so I wrote that ‘poem’ on WeChat to suggest good reading material,” he said.

When she saw the post, Liu Wei, one of the anchors of The Voice of Hubei, contacted Lu as quickly as possible and invited him to launch the special reading activity in conjunction with the program.

As a guest on the first episode, which was posted online on Jan 27, Lu spoke about the benefits of meaningful reading during the two-hour program.

On Feb 24, Wuhan’s makeshift hospitals, where patients with mild COVID-19 symptoms were treated, introduced the programs and broadcast them to entertain patients.

The more than 70 episodes posted online have attracted hundreds of thousands of listeners nationwide, according to statistics collated by the program makers.

“Reading is good medicine for our hearts,” Liu said, adding that the activity helped ease Wuhan residents’ anxiety and allowed them to feel the good wishes being expressed by people in other parts of the country, who made a point of reading the same books.

Lu said: “We valued economic development and GDP too much. The epidemic proved the significance of the spiritual life during our long period of solitude.”

In addition to the radio program, Lu wrote an article about the ancient and modern military history of Wuhan.

The city was described as a “heroic city” by Zhong Nanshan, an epidemiologist and member of the Chinese Academy of Engineering, during the fight against the coronavirus outbreak.

Lu said, “I had been doing research on the history of Wuhan, and I wanted to take the opportunity to explain why it is a heroic city from a historical perspective.”

The article, complete with rare historical photos, attracted more than 100,000 views online and was adapted for online courses provided by two schools in Shenzhen, Guangdong province.

To record “current heroes” in the battle against COVID-19, Lu used local media websites to post a column that featured young volunteers who were shouldering great responsibilities during the outbreak.

“I used to have a slightly dismissive opinion of people born in the 1990s and early 2000s, but many of their good deeds were beyond my imagination. They made greater efforts than me,” he said.

As a political adviser, Lu wrote a proposal to make full use of the internet to help with city management in the post-epidemic era.

“We further realized the importance of the internet during the lockdown, such as online group shopping through mini programs,” Lu said.

He added that he has suggested applying cloud computing to aid the ongoing resumption of work.

When the coronavirus engulfed the city, people from all walks of life started keeping diaries to record their activities and feelings.

The diaries were not only written by authors and journalists, who are accustomed to expressing emotions through words, but also medical workers and regular residents, who recorded what they saw and felt as the city was sealed off.

Ye Qing, deputy director of the Hubei Bureau of Statistics, started a column called “My Nth Day in virus-stricken Wuhan”, recording his observations in the city from Jan 23 to April 8, the day the lockdown officially ended, and encouraging residents to fight together.

“I was bitten by the writing bug, and I wanted to tell other people what was happening in the city. As I work for the bureau of statistics and am also a political adviser who is not a member of the Chinese Communist Party, I recorded the development of the epidemic, the control measures being taken and their effects to better inform people,” Ye said.

The diary was first published on Z.H.ISLAND, a high-end online-to-offline networking platform for entrepreneurs around the world, but it later spread to the Pangoal Institution, a public policy think tank, and other media outlets.

The public is supposed to get the facts, rather than rumors from unaccountable sources, Ye, 58, said.

He added that he also used the short-video platform Kuaishou to livestream details of interesting stories about economics during the lockdown.

According to Ye, one of the key reasons Wuhan people won the battle was the professional knowledge provided by people such as Zhong, the epidemiologist.

“The epidemic fully proved that knowledge is power,” he said, stressing that scientific guidance led to effective measures including the city lockdown and the makeshift hospitals, which greatly contributed to curbing the spread of the virus.

“We are all primary school students in the face of a new virus. No matter whether we are an official or a scholar, we have to listen to the medical academicians at critical times,” he said.

Based on his experiences dealing with the epidemic in Wuhan, he proposed as a political adviser that directors of health commissions at all levels should be medical professionals, and one of the deputy governors of each province should oversee health policy rather than focusing on finance.

After speculation caused anxiety among Wuhan’s population during the grim initial phase of the epidemic, traditional Chinese medicine expert Lyu Wenliang wrote a handbook on using TCM to help stop people getting the disease at home.

As an expert on treating typhoid with TCM, I had some thoughts about dealing with the coronavirus.”

He compiled the handbook in late January, targeting the 10 million residents in the city.

“I hoped people would learn to use TCM measures to help prevent the disease at home through an easy and universal handbook,” he said.

“The handbook helped people understand this new infectious disease from the angle of TCM. They gained a deeper understanding of how to improve immunity and prevent pathogenic factors in easily accessible ways,” Lyu said.

The handbook attracted more than 100,000 views online in the first week, according to the university.

Lyu said the measures suggested were applied to the treatment of COVID-19 patients.

“In late February, we popularized the handbook in North America via the alumni association in the region in an effort to help more people fight the pandemic,” he added.