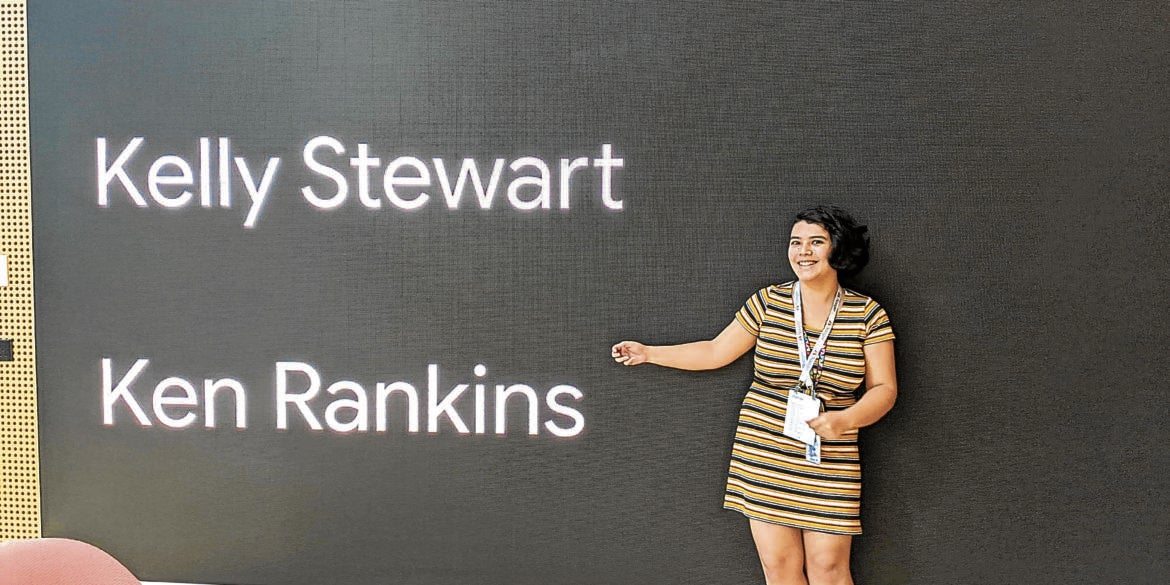 Filipino-Australian Kelly Stewart works as a software engineer at Google, but it has not been an easy ride.

Born to an Australian father and a Filipino mother from Cavite, Stewart has had to deal with the challenges of distance learning, a broken family and personal anxieties.

Born on Valentine’s Day in 1998 in a hospital in Grafton City, six hours from Sydney, Stewart grew up in a family that was not as perfect as she would have liked it to be. When her parents divorced, she had to spend time alternately with them each week, eventually staying with her mother for stability when she got older.

Living in remote and isolated Clarence Valley, she was not able to enjoy a traditional school, and did distance learning instead.

“I often wondered what it was like to attend classes in person. My schoolwork was always mailed to me in big bags of paperwork and cassette tapes,” she says.

Distance education also meant less social interaction. “I wasn’t able to develop the confidence to socialize with others. My only friend was my younger sister. We spent almost all of our time together, and fought just as much as we had good times. But she knew me the best.”

Stewart was excited the first time she went online. “When my father came home with a laptop, I was fascinated by how it all worked. I volunteered to be the house expert and read every detail of the user manual.”

It was when one of her high school teachers took notice of Stewart’s new interest and introduced her to the National Computer Science School that she became more passionate about technology in ways she had never known.

“I knew that this was a career path I wanted to pursue,” she says. “In my last year of high school, I worked hard to get into the University of Sydney and major in computer science.”

At 18, Stewart moved to Sydney, and it took her a long time to adjust to the new environment and university life. She also had a difficult time getting over her social anxiety. “I was always so worried about making a mistake that I would experience panic attacks. The huge pressure about my grades and scoring well also added to my stress, such that I often overlooked taking care of my mental health.”

At first, she did not think that therapy was an option because she thought she was capable of dealing with her problems. But when she failed one of her first year classes, she felt miserable and acknowledged that she needed help.

As soon as she got better from therapy, a friend recommended the Student Training in Engineering Program internship at Google Sydney.

“Working at Google meant I was able to get real experience working with people in the tech industry,” she says. “During internship, I developed an internal tool together with a fellow intern, and was surprised how much freedom and support I was given to work on the product.”

On her second internship, she was assigned to the Google Maps team, where she worked on product development and thought strategically about building help features for users.

When her internship ended, she instantly knew that Google was where she wanted to be. “Working at Google gave me a chance to experience its culture, and I was amazed that I was encouraged to be curious, keep a healthy work-life balance and pursue hobbies outside of work. I was also happy to work with a diverse mix of talented colleagues who fostered a culture of respect for each other.”

Jan. 26 was her first day as a Googler, in her first full-time role as software engineer.

Stewart is aware of her roots and Filipino heritage. She says, “I wouldn’t be where I am without my mother. Though I was born and raised in Australia, I wanted to be connected to my Filipino side.”

Among the many things she likes about being Filipino is the food, especially the adobo her mother would cook. When she visited their hometown in Rosario, Cavite, in 2019, she was shocked by the living conditions there and that made her even more grateful to her mom, who worked hard for her and sister.

Given a chance to help the community where her mother grew up, Stewart would like to teach young girls how to code. “I believe education, with self-determination, is key to an improved quality of life for everyone.”

She is enjoying the happiest time of her life in one of the world’s leading tech companies. She says she’s more emotionally and financially stable than she’s ever been, thanks to a great support network and a wonderful partner she can always rely on.

Asked for her advice to people who want to follow in her footsteps, she says: “I believe that anyone can learn—whether it’s to code, to take up a new course, or to be a chef. The key is to remember not to compare yourself with other people, because everyone takes a different path to get to the finish line. Getting into coding and programming without much access to resources and support was difficult, but it is doable.”

Stewart says difficulties in life are relative. Her family did not have a steady supply of electricity at home, and lack of internet access frustrated her as she started having more digital work submissions at school. But despite the challenges, she persevered and saw how the internet opened a new world for their family.

“Everybody’s circumstances are different and what is difficult for me is easy for others,” she says. “I hope my story reminds people that they have the capacity to succeed despite their circumstances.”