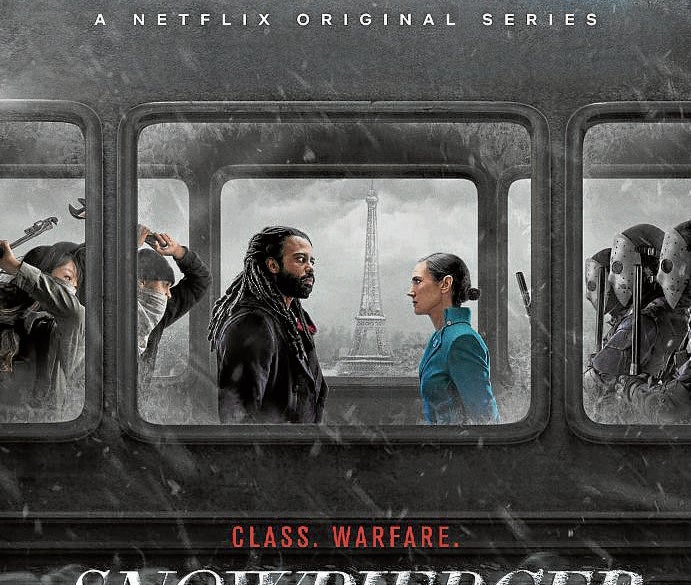 What we now know as “Snowpiercer” has already completed the full journey of adaptation, beginning in print form, moving to the big screen and arriving at its terminal destination of the small screen. It began in an unexpected place, in France, as a series of four graphic novels in 1982 titled “Le Transperceniege,” publisher by Casterman, from Jean-Marc Rochette, Jacques Lob and Benjamin Legrand. It featured a chilling, novel dystopian premise, where the world has been plunged into a new ice age that will kill all living beings save those aboard the Snowpiercer, a 1,001-long train that runs around the world. The train is a place of inequity, as those in the front car are the wealthy with first-class amenities and as you get further back, things get worse and worse until you get to the tail cars, where life is brutal. The story is very different from what we would see in any of the screen versions, focusing in multiple trains, a worldwide conspiracy and a very European, Cyberpunk-ish artstyle.

The series zooms out from the first volume, “The Escape,” and ends with a world-changing ending in “Terminus.” Three decades later, the series was translated into English by Titan Comics and retitled “Snowpiercer.”

Korean director Bong Joon-ho, who would eventually win a train car of Academy Awards for “Parasite” in 2020, saw many of the same themes he explored in “Parasite,” albeit in a future dystopian way, in “Le Transperceniege.” He had found the novel in a bookstore in Korea in 2005 and began thinking about adapting it. He wanted to take only the basic premise of the very first volume (ice age disaster, train as elitist ark) and spin a new tale from it. Gathering his team, Bong acquired the rights and began the long process of adapting it. He and screenwriter Kelly Masterson wrote the screenplay and they soon began casting it, with Octavia Spencer, John Hurt, Ed Harris and Tilda Swinton coming on board. Of course, Bong put two of his favorite Korean actors Song Kang-ho ang Go Ah-sung in the movie (they had both been in Bong’s “The Host” and Song would go on to play Mr. Kim in “Parasite”). Ironically, the biggest name on the cast wasn’t one Bong originally wanted. Chris Evans wanted desperately to be part of “Snowpiercer” but Bong thought the action star was too buff to play the part of a hungry tailee (someone who lives in the squalid, impoverished back of the train) but they worked around it with costuming and lighting, so “Snowpiercer” got its rebel leader Curtis Everett. They shot in the Czech Republic from April to July 2012 on a 100-meter replica of a train car. Bong had to fight off an interfering Harvey Weinstein, who insisted on edits, to release the film uncut in 2013 to acclaim.

Set 17 years after the extinction event, “Snowpiercer” echoes the train car in its structure, an extremely violent journey from the tail car to the very front, constantly moving, with more characters dying, more secrets revealed and more hopes lost as they get to their final destination. It’s claustrophobic and urgent, as desperate as it is necessary. It was also extremely well-made, appropriately grimy and ambitious, with great turns by Evans and Swinton. It was Bong’s first Hollywood movie and he would revisit the same questions in a contemporary setting back in Seoul with “Parasite.”

Consider then the “Snowpiercer” series from TNT and Netflix to be a rebooted, expanded version of the movie and not really the comic books (Bong is an executive producer). Set 10 years before the movie, “Snowpiercer” allows for a wider, more thorough look at life, challenging as it is, on the train. It qualifies as a prequel, but strictly speaking, it is in geek speak, more of a side-quel or even a reboot. In this telling, the tailees aren’t even supposed to be on the train as they have no tickets—they just forced their way on to the tail cars as Snowpiercer was pulling out of Chicago.

The series is more about the day-to-day life of the train—as compared to the sudden revolution in the film—until there is a murder in third class. It turns out there is only one former homicide detective on the train, the tailee Andre Lawton (Daveed Diggs) who is forced to begin solving the murder but then gets wrapped up in all kinds of unexpected and unsavory happening in the parts of Snowpiercer that are supposed to be civilized. Overseeing all this is the all-powerful Melanie Cavill (a steely but secretive Jennifer Connelly) who may or may not be lying to the passengers. Each episode focuses on a particular part of train life until all the little imperfections come together and can no longer be obscured. It’s a dark conspiracy of contrasts with Diggs and Connelly giving great performances as does Alison Wright, Mickey Sumner and Sheila Vand.

Watch out for Sean Bean (yes, Nedd Stark is here, don’t say we didn’t warn you). There is revolution brewing here as well, but more slowly and something that will play out throughout the season. Remember, in this world and theirs, access is power. You don’t need to have read the graphic novels or seen the movie to get into the show, but watching the movie in particular helps because the setting and the details would already be familiar. In truth, they could easily have made this a different train, such as the Icebreaker from the graphic novel’s second volume (in the book, there were multiple such trains), and it would have worked even better. That being said, “Snowpiercer” is first-class sci-fi story worth the ride—and it will continue, as the show has been renewed for a second season.

“Snowpiercer” is now streaming on Netflix.