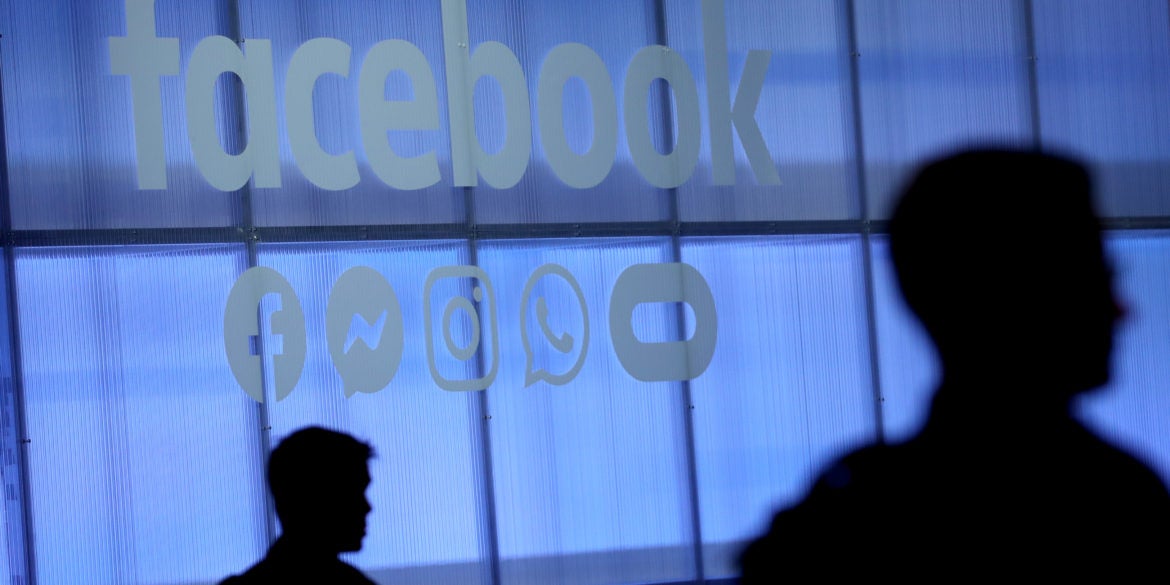 (FILES) This file photo taken on April 30, 2019 shows the Facebook logo displayed during the F8 Facebook Developers conference in San Jose, California. - Facebook unveiled on June 18, 2019 its global crypto-currency "Libra," in a new initiative in payments for the world's biggest social network with the potential to bring crypto-money out of the shadows and into the mainstream. (Photo by JUSTIN SULLIVAN / AFP)

It is a reflection of the platform’s double standards, says a netizen

The past few days, the social media platform has been plagued by a deluge of unauthorized duplicate pages of users in the Philippines.

The timing is suspicious. It occurred shortly after Filipinos took to Facebook and Twitter to protest the antiterrorism bill awaiting President Duterte’s signature. The online protests and criticisms were followed by student rallies at the University of the Philippines (UP) Diliman and Cebu demanding the junking of the bill that people believe threatens freedom of speech and curtails human rights.

Many Facebook users, including this writer, posted on their pages proofs of fake accounts bearing their names. They had a common feature: there were no profile photos or posts on the duplicate pages.

Glaring evidence that it was a concerted attack, according to a report in the Inquirer, was that it targeted thousands of students, faculty and alumni of UP, as well as De La Salle University whose building facade is decked with two giant Philippine flags and, below them, a black tarpaulin with the message, “Defend Democracy. #JunkTerrorBillNow.”

The University of San Carlos and San Jose Recoletos, both in Cebu, also reported similar cases among its students and faculty.

Who is behind the attack?

“Whoever they are, it’s not an individual or a small group of people,” says Athalia Freya Dy, a writer and online marketing specialist. “Facebook has been saying it has the technology to detect a flurry of sign-ups and that it proactively closes down fake accounts. For the most part, we know that to be true.

“But the fact that these people were able to create all those accounts in such a short time says a lot. It’s either it came from organizations with better software and technology than Facebook, or Facebook allowed it to happen.”

The timing, Dy tells Lifestyle, might be related to the antiterrorism bill, as well as the 2022 national elections. “You wouldn’t really be surprised that somebody is starting to campaign early. In fact, I have an inkling that these are just ‘resbak’ accounts, fake accounts that add to the number of shares and likes of proadmin personalities like Mocha Uson.”

Dy herself fell victim to the modus operandi, though she had anticipated attempts to invade her Facebook account’s privacy.

“I have always been paranoid about safety, so when I decided to be more vocal on social media about what’s going on, I used my Chinese name for my profile and ramped up my privacy settings,” she says. “That seemed to work because when the recent spate of fake accounts came in, I was one of the luckier ones that didn’t have duplicates.

She used a site, https://doppelbanger.now.sh/, to check for duplicates for her English name. “There were more than 100. Some are just namesakes, a lot were empty,” she says.

She proceeded to report it to Facebook, which took down the empty duplicates, but not those with profile photos.

“One had eight friends, no posts but propaganda and shares of the Mocha Uson Blog. Apparently, Facebook didn’t think that this was a fake account,” says Dy.

The president of a top university and high school says his Facebook page, too, was victimized: “I checked it soon after I heard about the duplicates, but there were few. I was surprised that it ballooned to about 20 after a day or so. I reported to Facebook some of the fakes, but it’s tedious to report 20. So I just posted them on my page just in case those accounts try to pose as myself, and to warn others.”

A writer-editor of a national broadsheet says her Facebook page was faked on June 7. This one involved a bitcoin scammer but used the editor’s own photo.

“I was shocked to see my name and profile picture on an account not my own,” she says. “The timeline of this bitcoin scammer also had pictures that were stolen from my account, some of them inserted into his old posts; you can see this in the ‘edit history’ of the posts.”

The editor posted the link of the impostor’s account and asked friends to help report it, which they did.

“The personalized Facebook link showed the name reyjohn.dichoso. I don’t know who this guy is, we have no friends in common. He had 4,924 friends when I discovered the account, many of which looked like fake accounts, too. I don’t even have 2,000 friends.”

“The thing is, Facebook has been saying it is against fake news and fake accounts. However, it has been showing the opposite,” Dy says.

“It’s true that it took down hundreds of fake accounts and got rid of Twinmark (Trending News Portal, Netcitizen, Daily News PH, etc.), but that was only after the Cambridge Analytica scandal, and after a series of investigative reports that showed the Mocha Uson Blog has been sharing their content and fake news.”

Dy laments that while Twinmark is down, the Mocha Uson Blog lives on. “I mean, come on, if you take your position on fake news seriously, then we all know which page needs to go first. Here you are cleaning up the source of fake news, but not the No. 1 page that shares it. It kinda makes you think that the Mocha Uson Blog is untouchable.”

Reporting fake accounts can be frustrating. “Facebook claims that you need to report,” says Dy. “Yet, when you do report, you’re almost always told that it’s ‘not violating community guidelines.’ For instance, after reporting DDS (Diehard Duterte Supporters) pages that showed malice and issued death threats against the Vice President in 2019, Facebook didn’t take down even one of the posts.”

She adds, “More recently, a supposedly Christian page was posting homophobic statements against pride month and the LGBT community. I reported both the page and three of its posts. Facebook didn’t think that homophobic slurs were against its community standards.”

The reporting procedure takes a lot of steps, says Dy. “It takes around six to seven clicks to finish a report. At a time when the rest of the world is going for one-click sign-ins, Facebook makes reporting very complicated.”

One spends time to report a violation, but Dy says one shouldn’t be surprised if Facebook moderators just trash it. “So sino pa’ng may gana mag-report?”

What can one do to discourage fake accounts?

“When you decide to use Facebook, it’s really every man to himself. You take care of yourself. You can limit past posts to friends, but there is no way to mass delete posts. Facebook doesn’t make it easy for you to be safer online,” says Dy.

She advises: “Read up and implement privacy controls and think before you click. Never mention names, it can get you in trouble.”

The biggest eye-opener is that Facebook chief executive Mark Zuckerberg himself is under fire. A number of employees, including engineers, have resigned after Zuckerberg’s refusal to take action on inflammatory posts by US President Donald Trump that spread misinformation.