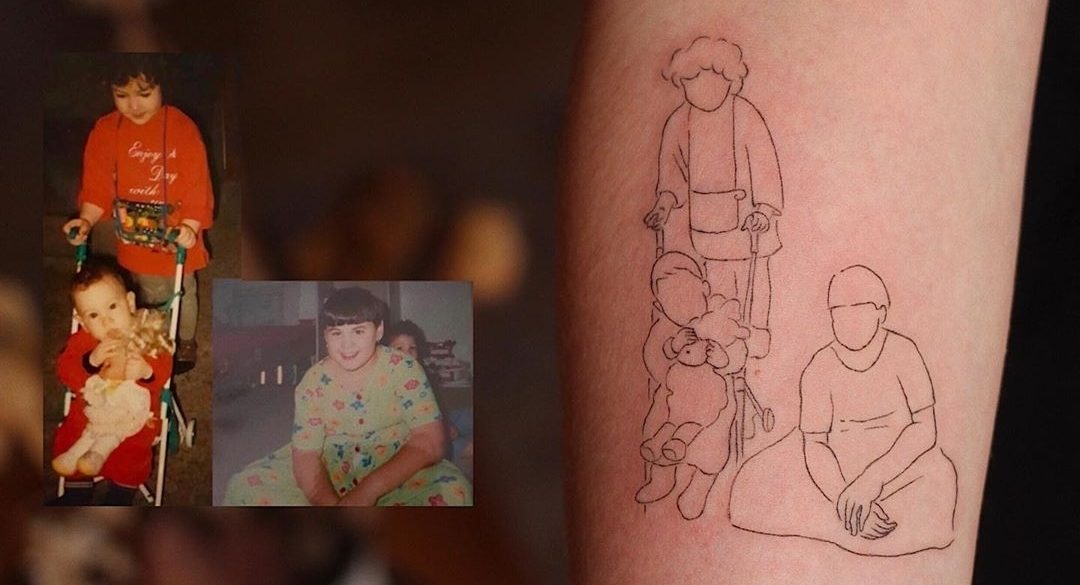 Tattoo based on family photos (Courtesy of tattooist, Kim Jin-hwan)

SEOUL — Showing tattoos in public has long been taboo in South Korea, where there are still many negative stereotypes about inked skin. In the past, tattoos were seen as gangster symbols. Also, the deeply rooted Confucian culture discouraged people from altering the bodies they received from their parents.

While tattoos are part of a subculture in this conservative country, the art form has gradually gained mainstream attention in recent years as softer and more delicate designs began appearing on the scene. These designs are breaking preconceptions about tattoos supposedly celebrating violence.

A Korean-language search for “sentimental design” brings up a number of tattoo images on social media, including nearly 800,000 on Instagram.

Kim Jin-hwan, a 31-year-old tattooist who goes by the name howdy, says nearly 80 percent of the customers at his tattoo parlor in Mapo, northwestern Seoul, are foreigners who want Korean-style sentimental tattoos.

“Some of them travel all the way to Seoul just to get tattoo services or stop by our parlor while traveling in Korea,” said Kim, who studied Western painting in college and opened his business four years ago. “The so-called sentimental tattoos have been in fashion for a couple of years among the younger generation in Korea and are considered quite unique among foreigners.”

Kim said tattoos based on family photos are popular among customers from home and abroad. Some customers want a permanent reminder on their skin to honor a beloved pet.

Though tattoos are growing more popular, Korea is one of the few countries that ban tattoo services unless they are carried out by medical practitioners. In 1992 the Supreme Court ruled that tattooing is a medical procedure — effectively criminalizing the majority of tattooists.

Many tattooists say the law is outdated. In Korea, tattooists with no medical background often work at dermatology and plastic surgery clinics, where semipermanent eyebrow and eyeliner tattoos are widely sought out.

“Tattoo has become a pop culture in Korea, and the so-called sentimental tattoo is at the center of it. We have put in efforts for years to revise the law to classify tattoo as an act of art rather than medical practice,” said Lee Eun-kyung, vice president of the Korea Tattoo Association.

She added that at least 20,000 people in Korea worked in the tattoo industry as of early 2020, and the tattoo market is estimated to be worth around 2 trillion won ($1.68 billion), according to the association’s data.

When Lee Yoon-seo, a 27-year-old tattooist who goes by the name May, traveled to the US last November, she was surprised to see tattooists from different countries showing interest in a tattooist from Korea.

“It seems the ‘Korean tattoo,’ which is also called the ‘sentimental tattoo,’ has become a new genre globally,” she said. “They were really surprised to hear that tattoos are illegal in Korea unless the tattooists have a medical license.”

Doy, who has been in the field for 13 years and launched Korea’s first labor union for tattooists in February, says a tattooist’s work is closer to art than medical practice since it requires an aesthetic sense for drawing and coloring.

“Tattooists from the younger generation laugh at the fact that working as a tattooist is illegal and requires a medical license,” he said. “Many Korean tattooists are recognized abroad, and some of them are working at major tattoo shops and working with Hollywood stars with their aesthetic sense and deft skills appreciated.”

Kim Se-young, a professor at the Christian College of Nursing, said there should be a more active discussion on whether to legalize the services of tattoo artists, as well as discussions with doctors, as tattoos are becoming more popular in Korea.

“We should not neglect the rising culture of tattoos, otherwise problems such as side effects, hygiene and safety can arise,” Kim said.