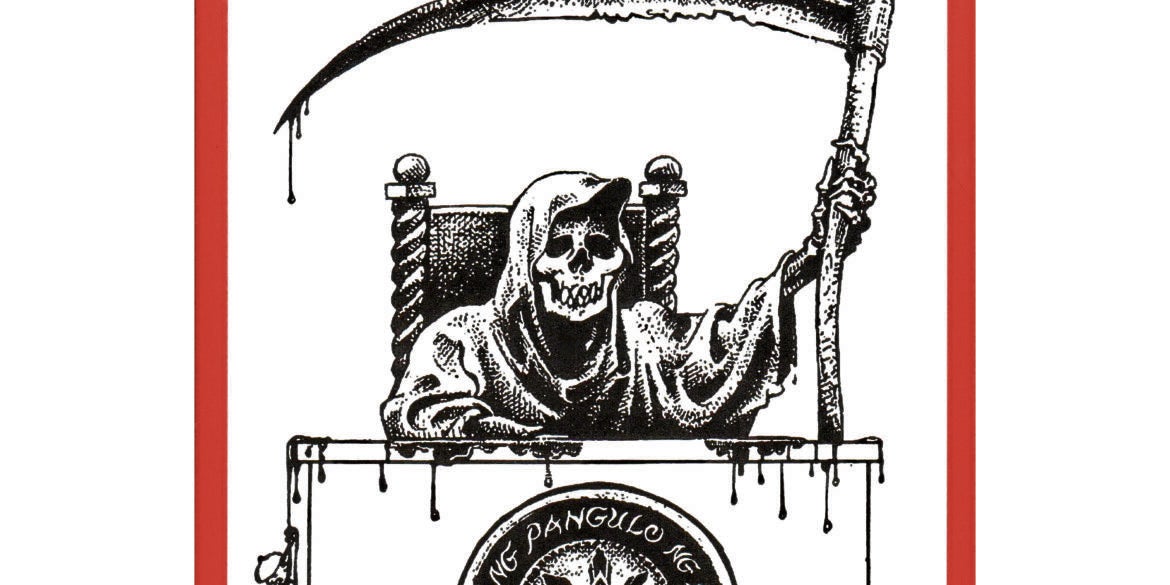 Editor Gémino Abad: “Without the writer, the poor and oppressed among us have no voice else.”

In 1973, Jose “Pete” F. Lacaba published a poem called “Prometheus Unbound,” an acrostic poem (meaning the first letter for its 24 lines spelled out a message) in Focus Magazine under the pseudonym Ruben Cuevas. In Lacaba’s case, the message was “MARCOS HITLER DIKTADOR TUTA.” “This poem was published, innocently, by a national weekly magazine in 1973, a year after martial law was declared, helping earn for the poet-journalist unjust time in a Marcos prison,” recalls editor Alfred A. Yuson in his introduction to “Bloodlust: Philippine Protest Poetry (From Marcos to Duterte)” (Reyes Publishing, Manila, 2017, 177 pages).

Here is the ending of Lacaba’s poem: “Orion stirs. The vulture/Retreats from the hard, pure/Thrust of the spark that burns,/Unbinds, departs, returns/To pluck out of death’s fist/A god who dared to resist.”

The Lacaba poem is the oldest in this anthology. “The idea for this fresh anthology of Philippine protest poetry came early in 2017, when it became increasingly evident that the president elected some eight months previous had no intention to backtrack from his declared war on drugs that resulted in a determined assault on human rights, indeed, on the lives of Filipinos,” Yuson notes.

“Bloodlust’s” coeditor, Gémino H. Abad, notes succinctly in his foreword: “Our country today is in crisis . . . Our leaders must listen well, not play deaf, and be sensitive to, and not resent, criticism; and there are criteria for a right judgment which presupposes integrity of character and a sound mind.”

“Here, then, is the poets’ response to what is happening in our country—from the subtle to the outraged—in four languages,” Yuson explained. “It took us some time to gather these, but now we join our voices with those of the rest of our fellow Filipinos who cannot abide by bloodlust.”

Kilates talks of this impunity in “Vers Macabre (Or: The Song of Impunity)”: “They tick them off,/Names from a secret list, . . . They go as if à la suerte —/Except to trace where all the beat/Comes from: the name of the blame,/The rhythm of the saints, Duterte —/Distinct reverb of La Muerte —/Which, by coercing the vowels,/Echo the loss of all sense: insanity,/Or the obscenities bouncing/Between walls: impunity.”

Witness De Veyra deconstruct the history of shabu in inimitable fashion in “Shabu is D’Most Dangerous Drags in the History of the Solor System.”

There is the Maguindanao massacre described in Lao’s “Survivor’s Guilt”: “When it comes for me I will offer no resistance,/I who am guilty, having ceded all my words. Will the darkness/teach me its grammar, let me learn its many names?/I ask the backhoe that moves from shadow to light,/ask the gaping hole in the ground: Will you hold me as tenderly?”

There have been collections of protest poetry since martial law, but “Bloodlust” was an attempt to gather the voices that were emerging online and elsewhere more recently—against the events happening during the administration of President Duterte. “It has been three decades since Filipino poets have reassembled in pages of protest. Some poems in this anthology decry the controversial burial of Ferdinand E. Marcos at the Libingan ng Mga Bayani (Graveyard of Heroes), surreptitiously conducted in November of 2016 —some say as a further indication of the contempt for history and human rights on the part of the current president, who continues to profess to be a fan, nay an idolater, of Marcos,” Yuson noted. “Our protest against the cavalier disregard of human rights and lives comes full circle—from the the long period of Ferdinand E. Marcos’ rule to what we hope to be a brief tokhang tenure by Rodrigo Roa Duterte.”

This was three years ago, when “Bloodlust” first came out and its first printing sold out. The older poems protest 1972’s Presidential Degree 1081. But now, presciently, “Bloodlust” seemed to presage even more trouble. Now, the terror bill, with this part: “Sec. 9, Inciting to Commit Terrorism: Any person who, without taking any direct part in the commission of terrorism, shall incite others to the executions of any of the acts specified in Section 4 hereof by means of speeches, proclamations, writing, emblems, banners or other representations tending to the same end, shall suffer the penalty of 12 years.”

This ability of the state to identify writers as being “terrorists” is dangerous, and ironically, the importance of “Bloodlust” makes it a symbol of the protest and dissent a government could silence. If José Rizal were alive today and the terror bill a law, he would easily be identified a “terrorist.”

This is why one hears the defiance in Paderna’s “Marcela”: “But we are finally women with choice,/And we choose to fight now, we choose to be/As eloquent as your craft, and we reject/All the limits, conqueror or dictator be damned.”

As Abad wrote: Without the writer, the poor and oppressed among us have no voice else. Writers—and most certainly, other artists and scholars— read us and interpret us to ourselves upon our own ground: our culture and our history. They sharpen our sense of country because they strengthen our power of abstraction and imagination. In short, our literature wrought from whatever language, in whatever genre, is our people’s memory. A country is only as strong as her people’s memory!” INQAvailable in paperback from http://edushopph.com.