Retelling the story of the country’s most prominent twins | Lifestyle.INQ ❮ ❯ 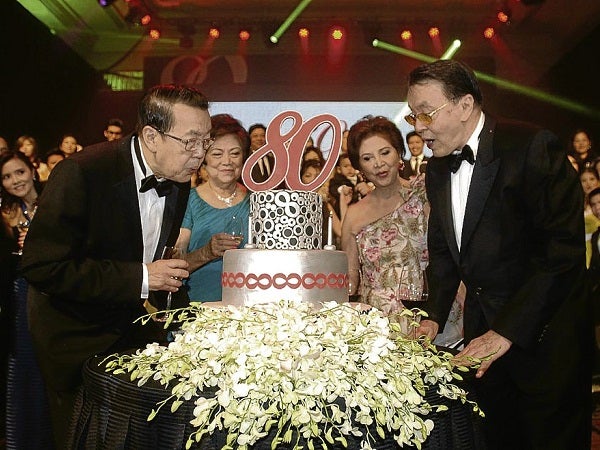 Retelling the story of the country’s most prominent twins

As the impeachment trial was under way in the Senate, a pair of twins was being feted by family and friends, indeed the country’s power society, at ShangriLa Makati’s Rizal Ballroom on the occasion of their 80th birthday. So what was the connection?

On the surface, there was hardly any. But a closer look at the lives of the twin brothers can’t but show not only how they became power-wielders in the country, but also how they’ve lived their lives to try to make a difference in society.

Twins Jose Jr. or “Joecon,” as he has been popularly known, and Raul “Ronnie” Concepcion steered their respective businesses into market leaderships on par with today’s global players, and while doing so, fought to help reform society.

Joecon was a political detainee in the Martial Law years and helped found Namfrel, the movement for free elections which became the catalyst of the People Power Revolution; Raul has been at the forefront in the fight for consumer rights, particularly in oil price hike issues.

Not only did they practice a work ethic and manifest a nationalist zeal that embodied the best of the Filipino businessman and industrialist; they were also like the Don Quixotes of their era, fighting what many deemed in their time were losing battles. Today, you can say they don’t make Filipino businessmen like they used to.

Juxtaposed against an arduous impeachment trial that puts in question the values—particularly, integrity—that are the bedrock of the Filipino soul, the celebration of the twins’ 80th birthday last Jan. 27 struck you as ironic.

Here are two gentlemen of the old school who have remained relatively idealistic even well into their twilight years, and here is a country that is gripped with cynicism, if not  mistrust of the nation’s revered institutions, a country that not only has grown jaded about its body politic, but is also on the brink of losing hope—yet again.

And yet, you couldn’t deny the happiness brought on by the milestone celebration. Happiness not in the form of fun and mirth like in any party, but happiness in a deeper sense—brought about by lessons learned from their fulfilled lives.

If the past era could breed men like the Concepcion brothers who displayed and continue to manifest strong, unstinting faith in God and in their country, perhaps we’re not a hopeless nation after all.

Their families chose to celebrate their birthdays not only with a party, but also by publishing their individual biographies—so that the younger generations may know, and learn from and revel in their stories.

Joecon’s biography, “Joecon’s Journey,” was written by his eldest child, Joey, who himself has formed his own advocacy (Go Negosyo); Raul’s was—secretly—written by his wife, the former Menchu de las Alas, who wanted to spring a birthday surprise on her husband. It’s titled “In pursuit of excellence… The Legacy of Raul T. Concepcion.”

Joey, with his mother Marivic, and Menchu, separately raced against time to finish the books in time for the celebration. “I gave them (five children) deadlines (for their inputs). I even threatened them: ‘Do you want your mother to look very old before the book is finished?’ I told them that for each day they delay to give their respective contributions, I get 10 new strands of white hair…” Menchu wrote in her introduction.

Behind accomplished men are supportive women. Behind the making of the biographies of accomplished men are women who kept mementos. In this case, behind the Concepcion men are their wives who, through the decades, have lovingly preserved volumes of clippings, stories, photographs of their men and families.

Menchu has kept scrapbooks of mementos, aside from clippings; Marivic (nee Araneta), to this day, has the love letters Joecon had written her, from their courtship to their married life—all 400 of them—which she has kept for more than 50 years now. Some of these are reprinted in the book. (Joecon can write really long love letters. Yup, girls in the Facebook era are missing something: guys who write love letters—without abbreviations.)

Diligence, organizational ability, and undying admiration and affection for their husbands—Menchu and Marivic have huge doses of all these to make publishing these biographies a cinch.

Joecon and Raul are identical twins born 10 minutes apart. “I kicked him (Joecon) so he could get out ahead of me,” Raul would tell us, in jest, in an interview two weeks ago.

The ties between brothers must be one of the strongest familial bonds—and heartwarming stories—in Philippine business and industry. If the brothers didn’t remain attached to this day, that popular story of the Concepcion clan—more than 40 of them—being caught in the big Japan earthquake last year wouldn’t have happened.

Traveling as a clan—their annual reunion—they were in Tokyo during the earthquake that devastated Fukushima and paralyzed Tokyo.

But what makes the story of the twins interesting, if not engrossing, has to do not only with their being close-knit, but more with the significance of their respective—and distinctly different—journeys. As writer Tony Lopez noted, while the twins had been born only minutes apart, they were so different from each other.

In his youth, Joecon wanted to be a priest, influenced by his philosophy teacher, the great Ariston Estrada of De La Salle, spiritual thinkers, and Redemptorist priests. Even in his youth, Raul was into numbers and wanted to be an accountant—he became one; it is said that he counts his age down to the month and the hour.

Joecon studied agriculture at the Araneta Institute of Agriculture, where he would meet his future wife Marivic—and later, help build the Republic Flour Mills with his father-in-law, the nationalist Salvador Araneta. Raul would work in the manufacturing business founded by his father, Jose Concepcion Sr., one of the early industrialists.

In their college years, Joecon would organize religious groups such as the Student Catholic Action, and teach catechism; Raul would be active in varsity sports, such as swimming. After he established RFM, Joecon would help found Namfrel and, later, serve in the Cory Aquino government as Trade secretary.

With his father’s death, Raul would stay at the helm of Concepcion Industries—a vow he made to his old man at the latter’s deathbed—and turn it into the largest appliance producer in the Philippines (it built the first made-in-the-Philippines air-conditioner in the ’60s and the first local refrigerator in the ’70s), the only Filipino-owned firm of its size. But Raul would also have his consumer rights advocacy.

Their biographies point out how Joecon has been the idealist and dreamer fighting political causes, and Raul has been the pragmatist, building his vision for business.

In their seeming divergence, however, a common thread ran through their separate lives: They cared—and continue to care—about what happened and what’s happening to their country. They are involved in society and have marked their lives with various stages of involvement.

Joey remembers growing up in the family home in Pasay that would seasonally be turned into a relief goods center whenever disasters or calamities struck, whether it was a fire or a typhoon.

Joey cannot forget how, when he was about seven—barely having the consciousness of a Filipino citizen—his father led him out to the street in Pasay, to see for himself the bloody litter of dead bodies of the Lapiang Malaya men.

This must have been in the ’70s, during the infamous Lapiang Malaya massacre, when a band of fanatics was gunned down by government forces. That was his father’s rather odd way of exposing him to what was going on beyond their comfortable home, to social realities.

Raul, for his part, would once immerse himself in an oil refinery plant in Batangas if only to better understand the oil price hike issues that he was always battling.

Indeed the Concepcion twins were/are no fence-sitters. They’re identical in that sense.

“Having built an industrial empire, he felt an absence, a deficiency in his life. He did not feel comfortable just being a ‘fence-sitter.’ He felt business could be a great help to the community,” wrote Menchu of her husband in the book. He believes—and this is rare thinking these days— that “a businessman is successful only as those who shell out hard-earned money to buy his products.”

Joecon—who re-popularized the saying that it’s better to light one candle than curse the darkness, as he and his group gathered volunteers for Namfrel—would risk the ire of powers-that-be as he acted on his beliefs for reforms in the country.

An oft-repeated tale, now told in the book, was how in a Philippine conference of top businessmen with the then President Ferdinand Marcos, he stood up, and his contemporary Meneleo Carlos Jr. recalled in the book, “and enumerated all the ills being inflicted on business by the government.” An irked President told him, “Why don’t you just mind your own business?”

But, as Joey wrote in the book, his father was minding his “own business,” and at that point, it was the state of the country.

In the day to day, Joecon has shown a way of “not minding his own business”—in almost every traffic bottleneck he’d find himself in, he’d get out of the car, bring out his ubiquitous whistle, and try to untangle the mess and direct the traffic himself.

This habit of Joecon’s is well-known in society. Not many know, however, that he even did this on the way to church for the wedding of his daughter Michelle.  Joey wrote: “She and Dad were on their way to the church when, coming out of the village, traffic stopped moving. Then, to Michelle’s dread, Dad made the move. ‘Not on my wedding day, Dad, please,’ she begged, of course, to no avail.”

Even while he was in detention, with other political and high society figures, during Martial Law years, Joecon organized his fellow prominent prisoners, down to the last detail, as in who would clean the toilets.

“Joe is a staunch believer in everything great about the Filipino,” wrote Jaime Zobel de Ayala Sr. in the Foreword.

Apart from their public persona, the books paint very interesting similarities of the twins. (See sidebar)

The books, co-written with Joanne Rae Ramirez (for Raul Concepcion) and Lito Gutierrez (for Joecon), are an interesting read, not only because they give us an intimate peek into interesting lives, but more so, because they give you hope about the Filipino—how he could live with power and wealth, and still live for his fellowmen.

If the ongoing impeachment trial on TV is your daily downer, these books should be your upper at the end of the day.