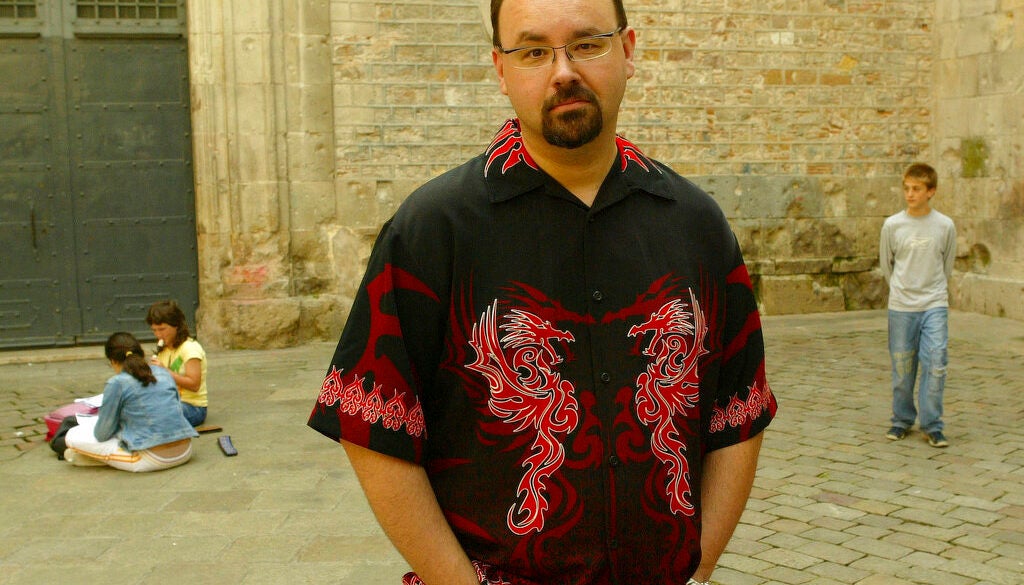 In this Wednesday, May 26, 2004 photo, writer Carlos Ruiz Zafon poses in the Sant Felip Neri Square in the center of Barcelona, Spain. Spanish writer Carlos Ruiz Zafon, author of the acclaimed "The Shadow of the Wind", died at the age of 55 in Los Angeles, United States, it was announced Friday June 19, 2020. (AP Photo/Bernat Armangue)

‘Shadow of the Wind’ author Carlos Ruiz Zafón dead at 55

MADRID — Carlos Ruiz Zafón, whose wildly popular 2001 novel “The Shadow of the Wind” led to three sequels and made him one of the world’s most beloved Spanish authors, has died. He was 55.

His Spanish publisher, Planeta, said in a statement Friday that Zafón died in Los Angeles. It gave no cause of death, but Zafón was known to have cancer.

“One of the most read and admired Spanish authors worldwide has left us,” Spanish Prime Minister Pedro Sánchez said on Twitter. “Carlos Ruiz Zafón… leaves an important mark in modern literature. Thank you for letting us travel through your stories.”

“The Shadow of the Wind,” a literary thriller from 2001, was the first in his series “The Cemetery of Forgotten Books.”

The novel, set in Barcelona and mingling reality, fantasy and romance, recounts the son of a bookshop owner’s quest to find the works of a mysterious author and to learn who has been destroying them.

“Every book, every volume you see here, has a soul,” Zafón wrote in the novel in a quote that many were posting on social media after his death. “The soul of the person who wrote it and of those who read it and lived and dreamed with it. Every time a book changes hands, every time someone runs his eyes down its pages, its spirit grows and strengthens.”

The sprawling, detailed storytelling and world-building led some to compare Zafón to Dickens and Tolstoy. And the book’s worldwide popularity as a work of Spanish literature brought him comparisons to Cervantes.

Its 2004 translation into English, heavily praised and promoted by Stephen King, made Zafón an international literary superstar.

He would spend the next 16 years writing three sequels featuring the same literature-obsessed protagonist Daniel Sempere: 2008’s “The Angel’s Game,” 2011’s “The Prisoner of Heaven,” and 2017’s “The Labyrinth of Spirits.”

“Zafón’s writing is sumptuous and dark and epic,” author Livia Llewellyn wrote on Twitter Friday. “The Shadow of the Wind is one of those novels I return to every couple of years because it’s everything I love about writing and what it can when created by an absolute master.”

Zafón’s works have been translated into more than 50 languages, according to Planeta, and have won numerous prizes.

Born in Barcelona in 1964, the son of an insurance salesman, Zafón worked as a publicist before becoming a full-time writer.

He first gained notice in 1993 with a horror-mystery novel for young adults, “The Prince of Mist.” It would become a trilogy along with 1994’s “The Midnight Palace” and 1995’s “The Watcher in the Shadows.”

Zafón was also an accomplished amateur pianist and composer — he humbly called it his “hobby” — who would sometimes play at his public readings and discussions.

He moved from Barcelona to Los Angeles in the 1990s and briefly worked as a screenwriter, but had far greater success by returning to novels. He split his time between the two cities for the rest of his life.

In a personal essay on his website called “Why I Write,” Zafón said it was because he had no other choice.

“I am in the business of storytelling,” he wrote. “I always have been, always will be. It is what I’ve been doing since I was a kid. Telling stories, making up tales, bringing life to characters, devising plots, visualizing scenes and staging sequences of events, images, words and sounds that tell a story. All in exchange for a penny, a smile or a tear, and a little of your time and attention.”