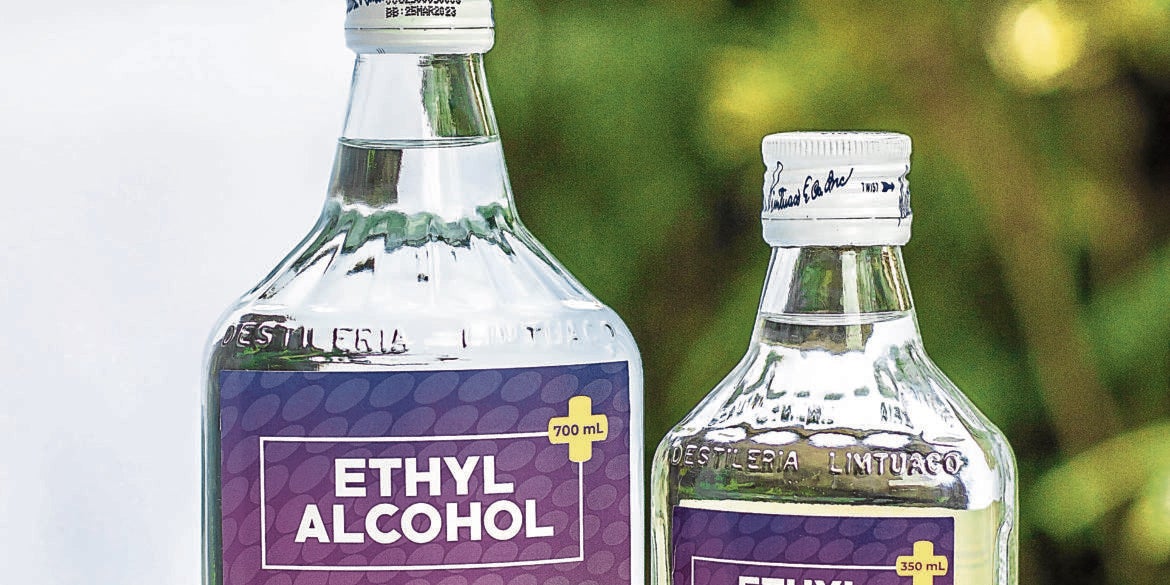 The glass bottles are being kept as memorabilia of the pandemic by some customers.

CEO’s foresight to switch from whisky to sanitizer

Olive Limpe-Aw saw it coming—a shortage of disinfectant alcohol, as media reported in January after the first few new coronavirus cases in the Philippines.

“At that time, though, we were still fully engaged in distilled spirits manufacturing,” says Aw, the fifth-generation CEO of Destileria Limtuaco, the oldest distillery in the Philippines of medicinal wine “sioktong” and White Castle Whisky fame.

Regarded as a maverick leader in a male-dominated industry, she says plans were made, just before the Luzon lockdown in March, for the company’s production facility to shift from making alcoholic drinks to disinfectant alcohol.

The disinfectant, ethyl alcohol, is a raw material used for making liquor. “The only difference is, we are required by the Bureau of Internal Revenue to denature the alcohol, to render the disinfectant product unfit for oral intake,” Aw says, adding that her management team immediately went to work, applying for permits and the license to operate as a cosmetic manufacturer to produce sanitizer alcohol.

The product, named Consumer Protect, a 70-percent ethyl alcohol antiseptic disinfectant with fragrances, rolled off the Destileria warehouse soon after the quarantine was imposed in Luzon.

The first outlet to carry Consumer Protect was Mercury Drug. “Mercury requested if we could provide them glass bottles instead of plastic,” says Aw. “We obliged. The product came in 350 ml and 700 ml glass bottles previously intended for production of whisky and gin. It was well received by consumers and became a collectible of sorts—memorabilia of the pandemic, as some netizens said.”

Lifestyle columnist Reggie Aspiras says, “It is very gentle on the hands and has a citrusy scent reminiscent of Spanish baby cologne.”

Does the shift mean Destileria will stop producing alcoholic drinks?

“Because of the pandemic, most local governments implemented a liquor ban, and this made it very difficult to sell alcoholic drinks nationwide,” says Aw. “Even when the ban was lifted, consumption in most provinces and cities has not yet fully returned to normal.”

She understands that the masses, the main consumer market of Destileria spirits and the hardest hit by the economic fallout of the pandemic, will prioritize food for now. But it won’t stop the company from making available a product to protect the health of the common folk.