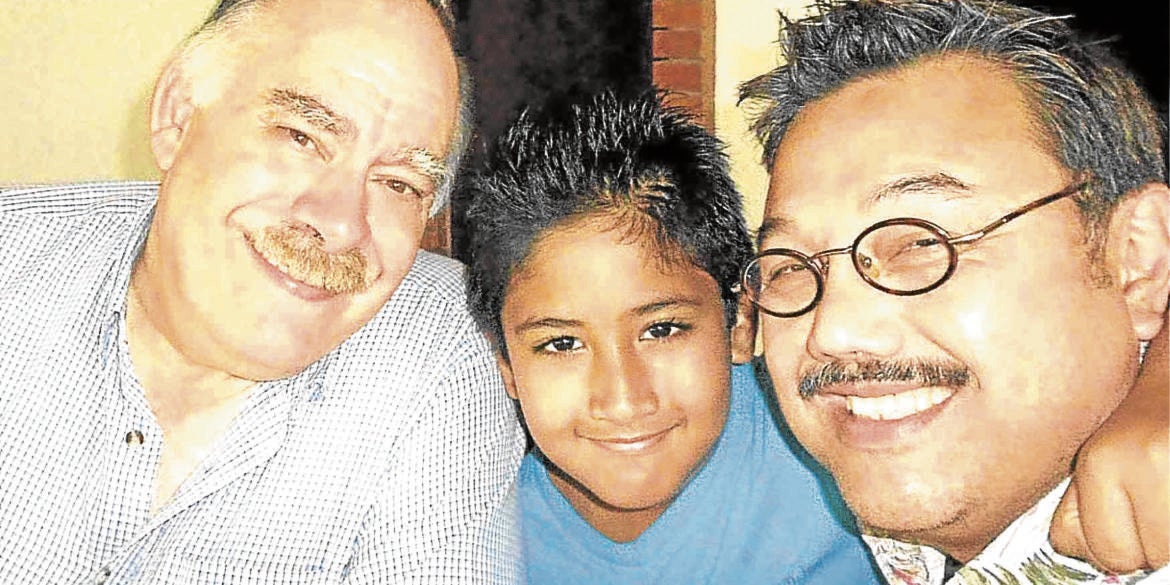 Bob Miller (left), Ito Curata with Taj: He completes us.

The boy Ito Curata and Bob Miller left behind

His fathers, fashion designer Ito Curata and his partner, ex-banker Bob Miller, died within a month of each other last March and April, both apparent early victims of the new coronavirus disease (COVID-19), leaving Taj, their only child, an orphan.

Curata’s death stunned the fashion industry and the social scene, because it wasn’t even known that he was sick. And not only was he a designer to many of the country’s highly visible women, he was also well loved. He and Miller were active on the social scene and would host dinners themselves in their large home in the south.

Their luxurious home, designed in the style of a Beverly Hills (as in Hollywood) mansion, was the venue of monthly dinners. Even our usually hard-to-impress late editor in chief, Letty Magsanoc, stifled a gasp when she first set foot in the house one early evening, for cocktails, some years back.

It was in those dinners that Curata and Miller would introduce their son and ask Taj to sing. And Taj, a grader then, had a beautiful soaring voice. To say that Taj was the apple of their eye would be an understatement. They adopted the boy as a baby, not long after they returned to live in Metro Manila, after their successful careers in the United States where they had a stylish home in San Francisco.

It was Miller who was rushed to the hospital last March, where he would be confined in the ICU for pneumonia initially. Curata followed. But after only a brief confinement, he succumbed to COVID-19 last March 26. Miller rallied for a while, but passed away last April 7.

The sudden deaths left Taj alone. He never got to say goodbye to his parents and merely awaited the delivery of their urns to their home.

It was Curata’s close friends—his loyal clients—who watched over the boy, like Rene and Anne Puno, his editor Joanne Rae Ramirez of People Asia where he wrote a society column, Linda Ley, Frannie Jacinto. Jacinto is now his guardian.

After news of the couple’s deaths, the next question on people’s minds was, how is Taj doing, an orphan overnight? Given the quarantine, not even his classmates could visit him.

“But even keeping all those things in mind, I still get very very sad. So I try to keep myself busy. I play the piano and try to teach myself how to play guitar. I also like to cook, so sometimes I would go to the kitchen, open the fridge, pull out some food, and make a meal.”

He misses them. He said, “The things I remember and I miss the most are the simple things we did together, like going out to eat, or watching a movie. I miss their company. They were always so caring and they would always be worried whenever I went out and rode my bike around the village.

“I also remember when I was still a kid, I would go to their room, I would jump on their bed and cuddle with them. They were so worried that one of them might roll over me and squish me since I was still a small kid.”

It might make things a bit easier for this boy if we retrieve what Curata and Miller wrote for Lifestyle in 2018, on Father’s Day, titled: “To be a father is our choice.” Excerpt:

“To say we had an initial, well-thought-out parenting style would probably be less than truthful.

“Although we had always wanted to have a child, we assumed that we were too old to be parents. So, when Taj came along, we were somewhat unprepared, and our initial approach to parenting started off as trial-and-error.

“But after six months, we came up with a list of principles that we agreed we would try to follow in raising him.

“First was honesty and truthfulness. When he was about six or seven, we told him that we would always be honest and truthful with him. And this included the details surrounding his birth and our decision to make him a part of our lives.

“…. We also told him that he could ask us any question, and we would respond in an honest and open manner. This even included questions about his birth mother and how he came into our lives.

“We also pledged that we would spend as much time with him as we could. We didn’t want to be absentee parents. We regularly take him on Sunday trips, plan movie nights, and expose him to things like concerts and other cultural events, hotel stays, airplane trips, weekend vacations, etc.

“We also wanted him to see ‘the other side of life’ since many people do not have the advantages he has. So, we regularly take him on feedings with our group, Angels to Street Kids. He is the group’s youngest member.

“Over the years, he has gone to poor barrios in Tondo and other places in Metro Manila, orphanages, the women’s prison, senior citizen gatherings, specialized care facilities for children with special needs, as well as similar organizations.

“We also decided early on to encourage him to have multiple interests. He is active in school, sings in the choir for church services, plays basketball, loves to swim, likes cooking, is a Boy Scout and, of course, plays video games.

“We also wanted to instill in him Filipino values such as love of country, family and traditions.

“And finally, we wanted him to understand fully that he is loved unconditionally as our son.

“On our first day with Taj, we were overjoyed to have him, but then reality set in and we realized we were totally unprepared to have a child in our home.

“So, we immediately went to SM, explained that we had just taken in a child and had no idea what we needed to do or buy.

“We were joined in the store by a male friend—the scene probably looked like the film ‘Three Men and a Baby.’

“After the salesclerks stopped laughing at our situation, they gathered their fellow employees and we went through the baby section listening to their advice and filling baskets with necessary items.

“…. Another time Ito went to Taj’s school for a father/son athletic event and had to compete with other men who were in their early 30s.

“These men were half his age, and in two of the games, Ito fell on his backside, much to his embarrassment. He decided then and there that he would have to be more selective in choosing the games he took part in.

“Anyone can be a parent as long as you are able to love a child unconditionally. And as we have told Taj countless times, families are made up of various permutations—especially here in the Philippines where there are so many absentee OFW parents.

“There are families made up of mothers and titas, fathers and lolas, a tita and a lola, etc. It may not be a perfect arrangement, but as long as the people in the arrangement love and care for each other, that’s all that matters.

“Having Taj in our lives definitely completes us.”

By retrieving these words of his dads, we hope that Taj could imagine them talking to him again today—like dad and child talking to each other.

Jacinto told me, “He is a well brought up boy.”

Taj continued his email, “I’d just like to thank them for everything they have provided me. They have sacrificed so much for me and I have never really gotten a chance to thank them.”

Asked what he wants to be, Taj replied, “My dream is to become an established singer/music composer, although I also wish to follow in my father’s footsteps and become a fashion designer. The only problem is I know absolutely nothing about fashion designing, but I would love to learn and give it a shot.”

Curata and Miller died without even seeing Taj grow up. But they have left him something every parent would like to give his/her child—the ability to dream.