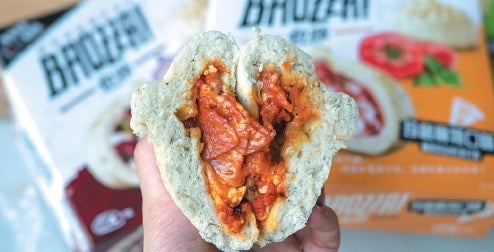 Putting pizza inside a Chinese bun

BEIJING — Two Americans have invented the ‘baozza’, turning toppings into baozi fillings. And the mass-produced fusion food is proving a hit in China, Li Yingxue reports.

Hot Pockets, move over. There’s a new game in town-well, at least in China. It’s not quite a pizza. And it’s not quite a baozi (steamed stuffed bun).

One problem has been the explosions, caused when the zesty tomato-based sauce heats up.

The 40-year-old Kentucky native and Harvard graduate and his business partner, Alex Cree, were both investment bankers before they started making baozza in China in 2016.

They spent a long time on research and development. The positive feedback they received at food festivals they participated in encouraged them to mass produce frozen baozza.

They can be purchased at physical supermarket chains and on major Chinese online-shopping platform Taobao.

“It only needs 90 seconds to heat in the microwave, which is quite convenient for people who are staying at home,” Heinold says.

Consultant Lei Yiyang recalls first trying baozza at a pizza festival a couple of years ago. She was impressed.

The 36-year-old bought some for her 5-year-old son when she noticed they were for sale online.

“My son loves baozza, especially the margherita flavor, which tastes like his favorite tomato-sauce pizza. When you take one baozza out of the microwave, the whole rooms smells like pizza,” Lei says.

She personally prefers to pan-fry them, she says.

Heinold spent a year studying Chinese at Peking University in 2001. He was assigned to a post in Beijing in 2008. And he has stayed, even though he has changed jobs several times.

He co-founded the Mexican cuisine restaurant chain Q Mex in 2014. Two years later, he and Cree decided to give pizza a Chinese twist.

“From soup baozi (guantangbao) to pan-fried baozi, I’ve tried all kinds of Chinese baozi, and it’s been part of my breakfast for years,” Heinold says.

“For the dough, we change the flour and add different Italian herbs.”

Heinold insists on a 50-50 ratio of dough and filling, which makes preventing explosions challenging. He also uses individual plastic wraps that help the baozza steam in the microwave.

The baozza and wrappers are handmade at a baozi factory in Yangzhou, Jiangsu province. Unlike traditional baozi, filling baozza requires two steps. First comes the sauce, and then comes the cheese.

“We notice Chinese customers are more sensitive to black pepper in the spinach-and-cheese filling, which is a bit spicy for them, so we reduce the amount,” Heinold says.

As baozza gains popularity on the Chinese mainland, the duo is exploring the Hong Kong and Singaporean markets.

They also plan to bring it to the United States.

Frozen pizza was an essential good for Americans during the pandemic that they often ran out of, Heinold says.

“So, we think this is actually a good time to bring baozza to the US.”