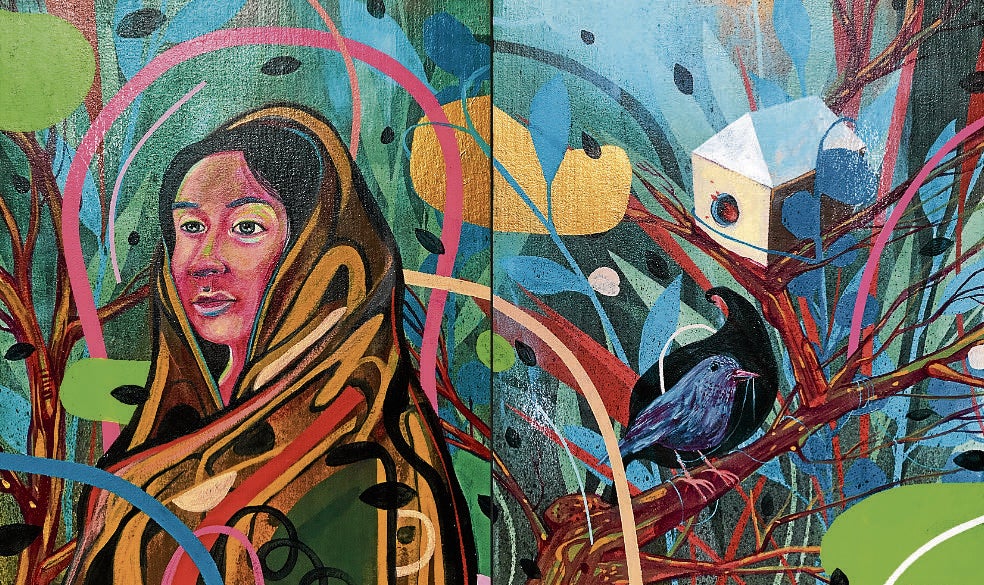 An artist’s journal of the plague year

From May 17 to 26, multimedia artist Jaime Pacena II was literally an “artist-in-residence” (AIR) at his own studio and place on Maginhawa Street in Diliman, Quezon City, and he documented his artmaking and general existence in the face of the enhanced community quarantine (ECQ).

For 10 days, Pacena documented his forced “residency” via an “Instagram takeover” of the social media account of leading contemporary art house Art Cube.

“I posted every day with three segments,” Pacena told the Inquirer. “One is the thought process [that presents my coping strategy during the pandemic]. Second is the acrylic-on-canvas work [that somehow shows the stages of grief]. And third is situating the artwork [in my] actual space of refuge or my studio, as part of the open studio idea. This somehow binds together work and space.”

In effect, the Instagram takeover unfolded online the exhibit of the works he did while on AIR and on ECQ. The social media platform therefore became the exhibit site of his new series of works.

Not surprisingly since the Instagram takeover was also an online diary and journal, the title of the exhibit was “Given Time,” referring to the 10 days he was given to do his art and chart its process under rather forced circumstances because of the lockdown.

The enterprise was unique and could point the way for art in the “new normal.” “Art residency” has suddenly been transformed into something compelling and immediately engaging. While before an artist became a “resident” in a space otherwise alien to him—a retreat for artists like a writers colony, a foreign university, another art gallery—Pacena in “Given Time” becomes literally a resident of his own domicile and atelier, forced by the pandemic and restrictive health protocols to stay and work there. It could be said that the ECQ forced this one artist, who admits to be suffering from “stages of grief” as a result of marital estrangement, to be “domesticated” in a setting otherwise lacking in domestic bliss. Meanwhile his private grief is pitted against a public health threat, and the art that results from this dialectic may yet become in these abnormal and dangerous times the art of the new normal. Pacena’s is to say the least a paradoxical art.

His Day 1 acrylic painting reveals Pacena’s lockdown state of mind: “Dazed and Confused.” It shows a bird peering out of its house amid wild foliage; on its beak is a blue thread that meanders through the branches and tree tops. Photos posted on Instagram show the painting situated amid the greenery and domestic squalor of the compound in Maginhawa Street in Diliman, Quezon City, where Pacena resides with his mother and 7-year-old son Sunday Pacena.

The thread again appears in his acrylic work on Day 2, “Panic and Denial.” “This piece,” Pacena’s journal says, “is a narrative about a girl in the middle of a dark space, supposed to be water, embracing her security blanket, and a thread is tied on her fingers as a symbol of tracing one’s steps, a guide or a symbol of a lifeline.” Pointed streaks seem to target her and amid the welter of colorful abstracted lines is the shape of a house, much like the birdhouse in the first painting.

If the thread and house are icons on repeat mode, it is perhaps because Pacena is reeling from the impact of the breakdown of his marriage, something that is otherwise adumbrated if not explicitly admitted in his journal of the plague year.

Pacena says he wasn’t prepared for the ECQ since he had “barely enough” savings after investing in his show last March at Blanc Gallery before the lockdown. He and his wife had separated in 2018 and they agreed on shared parenting responsibilities although because of the lockdown, he has ended up with his son for the duration of the ECQ.

And then the painful disclosure: “It was the first week of quarantine before the full lockdown [when] I had my breakdown.”

Admitting he felt lost in his own creative process, Pacena said he often asked himself how he could do something over and over when “it doesn’t feel right anymore? The lockdown has made us live life in repeat… time either fades, moves slow or moves fast.” ECQ has resulted in “questions of uncertainties.”

His iconography-on-repeat mode, which is of course objective correlative of his own personal obsessions, is more than prefigured on Day 2, which is devoted to remembering Haitian-Puerto Rican-American Jean-Michel Basquiat (1960-1988), one of his early influences, and the art of collecting.

Basquiat’s graffiti-inspired work appropriated the gestural repetition of neo-expressionism while collecting, as Pacena suggested, would be one means of coping with the anxiety of the pandemic “for the sake of our survival.” Collecting after all may be a form of neurosis that paradoxically checks the panic and alarm—and neurosis—triggered by the new coronavirus.

Day 3 is devoted to music, another multimedia concern of Pacena who’s directed several music videos. “Anxious and Scared,” depicts a shrouded figure encircled by the thread icon and pitted against abstracted elements. Beside the painting are the lyrics of a song from The Cardigans’ “Emmerdale” album: “Please see my dear how we invented the fear inside that space no one could interfere…”

Day 4 is on movies, specifically Pacena’s participation in a free online writing workshop of vereran writer-filmmaker Ricardo Lee. Pacena considers Lee “the best teacher” he ever had. “Lahat sa atin hindi buo (We’re all broken),” Lee is quoted as saying. Perhaps this is the inspiration of the artwork, “Bubog,” which may symbolizes the shards of the artist’s broken self.

Included in “Given Time” is the story which Pacena submitted to Lee’s workshop. The story is set in Japan—in a town ravaged by the tsunami of 2011, which draws from Pacena’s stint as a curator in Japan. Photos of the town as it undergoes rehabilitation are posted on IG. The story tells of a Filipino trying to reconcile with the memory of his estranged father in Japan. Apparently, Lee was so impressed with the story that he, according to Pacena, asked him to do a script treatment of it.

Day 6 tackles online platforms and continues Pacena’s obsession with collecting by excerpts from an academic paper on the use of the new media for rethinking the role of museums and the conservation of their collections. For Pacena, the multimedia comes to the aid of “recollection,” that is, of remembrance and collecting memories. The abstract acrylic he presents here, “Innerscapes,” is a Warhol-like repetition with some variations of what may be a head figure in different manners of psychological dishabille. Since this chapter is focused on the new media, also presented here is how the acrylic works may be laid out at Art Cube Gallery.

Day 6 is about “Characters and Desires,” and Pacena repeats his obsession with cinema, the supreme medium that elicits desires and fantasies, by references to Chinese actress Maggie Cheung and notable movies she’s performed in. Juxtaposed is the acrylic work, “Longing and Urges,” which is further juxtaposed with verses about prostitutes, notably Jose Lacaba’s wittily trenchant “Lahat Ng Hindi Ko Kailangan Malaman, Natutunan Ko Sa Pelikulang For Adults Only.” Which again make allusions to Pacena’s love of cinema and his attempts to make a feature film of his own.

“Cleansing and Acceptance,” the acrylic painting for Day 7, depicts a nude with her back turned to the viewer at whom she stares; she seems dipped in a pool of water, indicating cleansing and purgation (a photo shows the work hanging in Pacena’s bathroom), and the text beside the painting quotes Paul’s letter urging Roman Christians to glory in their sufferings “because we know suffering produces perseverance.” In his journal, Pacena notes he remembers an Instagram image of a woman kneeling in front of a church deep in prayer. “[F]or someone to go to the church despite the pandemic… to go out and kneel and pray hard for something she hoped and believed her faith [would] provide, is a clear message on how things are outside the confines of our own refuge.” 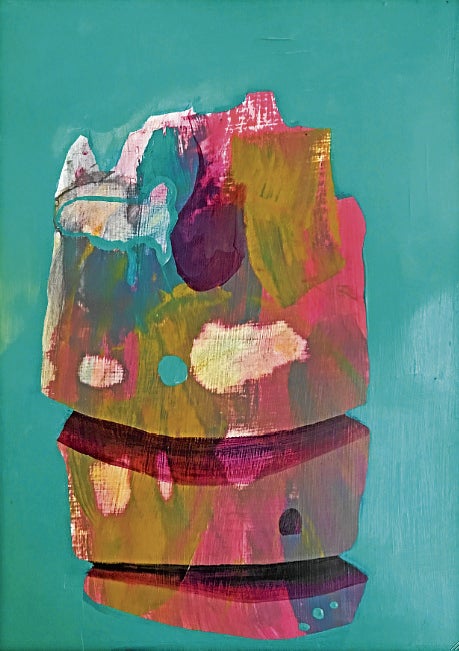 The religious dimension is further heightened on Day 8, with the very striking “Faith and Belief,” a large diptyich (40” x 60”), depicting two women, the first with her eyes closed and deep in prayer, the other, her bust showing as the rest of her body is dipped in water (again the cleansing allusion), her eyes open and from her lips issuing the word, “Laban (fight).” On their left is the first panel, depicting wild outgrowth crowned by the image of Malacañang, center of state power and the residence of the land’s foremost patriarch and misogynist. Not surprisingly Day 8 is devoted to “Tao at Estado (Person and State).” We strengthen our faith,” Pacena notes, “in order for us to be equipped with our spirituality to face the chaotic world… and we stand proud [with] our belief to fight for our right and the right of those who are helpless citizens of this country.”

Pacena devotes Day 9 to “Life” and the optimism of the future, with photos of his son, Sunday (May 25 was a Monday), waiting for his dad to wake up, and the drawings the kid has made as “home activities” while on ECQ. The optimism is more than evoked in the beautiful painting, “Alive,” in which all of the icons and allusions and riotious colors of the previous paintings have been synthesized in a wild, celebratory fashion.

For Day 10, Pacena goes for full abstraction and full spiritual force in “Growth and Freedom,” painted on a round canvas frame with a diameter of 48 inches. The globular frame may embody both the artist’s private and public worlds as well as the trajectory of his unique art residency while on quarantine. Not surprisingly, the painting is now situated in the artist’s own studio and desk, showing how Jaime Pacena II as man and artist has come full circle, despite social distancing.