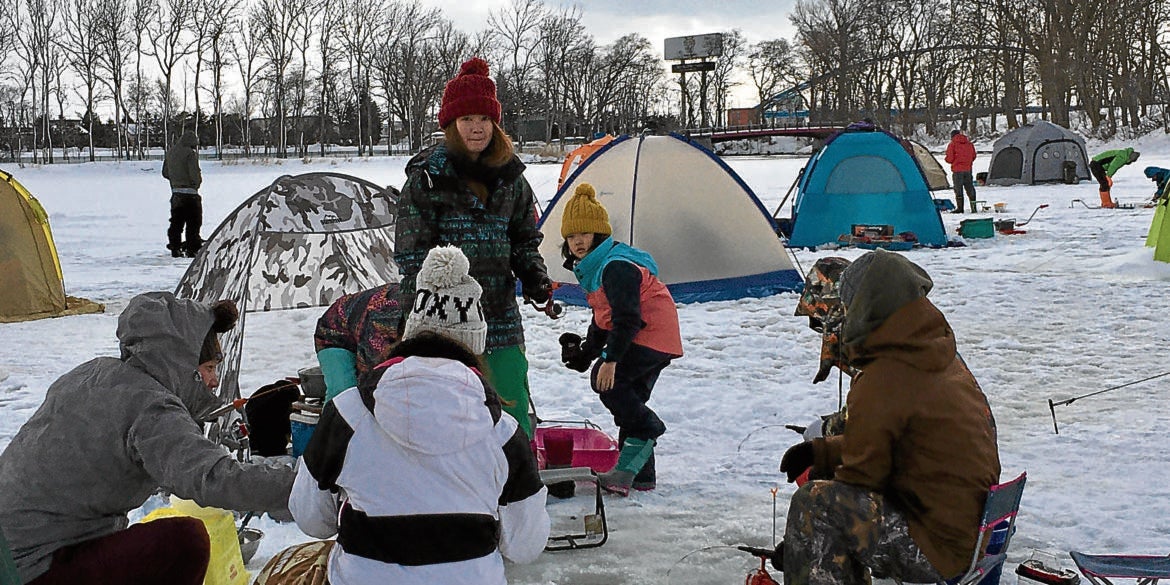 Smelt ice fishing is a popular family activity about 30 minutes from downtown Sapporo.

If someone had told me that I would one day find myself buck naked in a mountain hot spring at -12°C weather with snow falling on my head, I’d have said, “Maybe—when I turn into a Japanese macaque,” or some other wisecrack.

The idea was preposterous, not because of the getting-naked-in-a-public-bath part—I’ve been to an onsen, and after you get past the awkward first five minutes of being stark naked among strangers, you realize that they see you but they’re not really looking at you. (Besides, the chances of bumping into another Filipino are little to nil—it’s almost always only in the shops where you will find them.)

What seemed unimaginable was, the onsen is outdoors, in the dead of winter. It was late January, just before all hell broke loose with the new coronavirus disease (COVID-19) when I found myself in the foothills of the northern tip of Japan. That would be my last overseas trip before the pandemic. (Japan still bans international travelers from many countries, including the Philippines.)

The onsen or hot spring bath is deeply ingrained in Japanese culture. For thousands of years, families and friends have congregated in onsen to socialize. It’s believed that the practice of being naked among kin also means shedding masks and pretensions.

These days, most onsen, found either in mountains, ryokan or traditional inns, or even in hotels, have separate baths for men and women. Strict etiquette is followed. Selfies not allowed!

There’s usually a shower area with low stools and individual soap and shampoo/conditioner dispensers where one can wash one’s hair and thoroughly scrub one’s body. Dipping into the baths without washing yourself is an absolute no-no.

You’re provided with a small towel to cover your private parts. The towel is not intended for use as loofah while you’re soaking! People either set the towel down or place it on their heads.

The practice of washing with water is a rite of purification, and relates to Japanese spiritual beliefs.

Apart from bonding, many also go to the onsen for healing.

The hot springs, with water temperatures ranging from 25°C to 50°C (each pool often has a sign bearing the temperature), are said to have therapeutic properties. They’re rich in minerals believed to heal various ailments, from arthritis and neuralgia to skin conditions like eczema, even aging.

Heat also improves blood circulation, and some claim it even increases metabolism. Soaking in hot water relaxes not just the muscles and body but also the mind.

A week earlier, as I struggled to get back on my feet after falling on my tail one time too many, my skis getting tangled with each feeble move and digging myself deeper into the fresh, foot-deep powder snow—the only thing breaking my fall each time—I was mentally kicking myself: How did I get myself in here?

The idea of this deferred holiday was a week of doing nothing. Instead, I found myself in the outskirts of Sapporo, in the middle of winter, attempting to cross-country ski!

“Don’t use your poles to get up. Try to kneel.” That was Marc, the Canadian ski instructor we found on Airbnb Experiences. He has lived in Sapporo for over 20 years and has been teaching ski newbies, a good number of them Filipinos, he said.

He drove us to an arboretum one early morning, in a forestry research institute, a secret spot only snow-addict locals like him know about. It’s the perfect spot to learn cross-country skiing, since you have the forest all to yourself.

I’ve stayed in ski resorts, but since I’m no fan of heights, I’ve always been too intimidated to try skiing. Cross-country or tree skiing is the next best thing, since the terrain is mostly flat. Or so I thought.

Many ski resorts hadn’t opened, Marc said, since there wasn’t enough snow. He said this as heavy snow fell over our heads, and we were surrounded by knee-deep white—but what did this woman from the tropics know?

Sapporo is the capital of Hokkaido Prefecture on the northern tip of Japan. This year, the city had to import snow from neighboring towns to build its famed sculptures for the annual snow festival, which draws tourists in the millions and was set the week after we left.

“You’re getting faster!” Marc said again. Now he was just plain goading, I groaned inward—he was cheering me on for scrambling faster back on my feet after every fall! How could someone fall at a 20-degree incline?

I could hear him but my body just wouldn’t follow. Adults tend to overthink their every move, Marc pointed out, always anticipating the fall—and that’s why they fall. Kids, meanwhile, even snow newbies, are fearless.

At that point I was mentally rummaging through my meds stash—did I bring muscle relaxants?

“You must go to an onsen” for an après-ski soak, Marc said. He suggested Jozankei Onsen, a hot spring town an hour’s drive from Sapporo.

In a week, we went twice. I never had to take pain reliever.

The first onsen was on the third floor of a high-rise hotel called Jozankei View, a short walk from the tourist center. While most of the pools were indoors, it had an open-air bath, which was where I parked myself for a good hour, among local women aged 7 to 70.

In the early evening’s semi-darkness, I sat submerged from the waist down in the 40°C pool, as the -16°C air froze my wet hair into sticks. Amazingly, I didn’t feel cold.

Had we not worried about missing the last bus back to Sapporo, I would’ve stayed there longer.

On our last full day in Hokkaido, we went back to Jozankei. The most popular onsen, Hoheikyo, is a rotenburo (open-air bath) and located at the bus terminus, a low, nondescript building at the foot of a hill.

The baths, built on and around natural rocks with a wooden pergola at the center, were situated outdoors, just below the edge of the forest, where snow dusted the branches of tall, mostly barren trees. The ground was coated in pristine, thick marshmallow white. Unlike the nighttime trip to Jozankei three days earlier, I could see the view. It was magical.

It was a busy day at the onsen, though guests—again, from toddlers to pensioners, mostly locals—spoke in hushed tones. It was a bright and sunny late morning.

I chose my quiet corner in the bath and allowed the scalding water, tempered by the -12°C air, to gently unknot the kinks in my tired muscles. It was a new way of soaking in nature for me who loves the beach. No sand between my toes; instead, snow flurry fell ever so lightly on my head.

I sat there for a long time, under the midday sun, in no rush to leave, not knowing then that that would be my last moment of calm for a really long time. (We transited via Hong Kong the next day; three days later, it closed most of its borders to travelers from mainland China. Three weeks hence, COVID-19 claimed its first fatality in Hokkaido.)

As the frigid air froze my damp hair, my skin turned soft and beet-red, like those Nagano macaques I’ve only seen on nature shows. I’ve often wondered how those primates could sit in the pools for hours, stewing in the steamy water, the glacial breeze turning their wet fur into spikes.

Now I know what a chill life those snow monkeys have. INQ