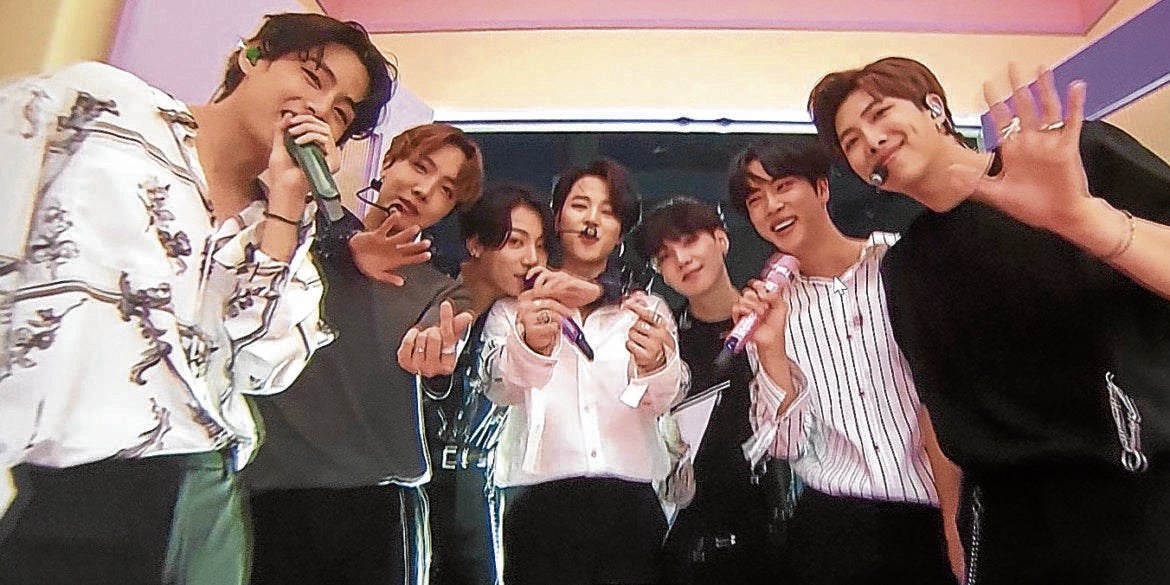 BTS end the concert with a “Borahae (I purple you!),” a greeting coined by V a few years ago for fans.

Our biggest takeaway from the “Bang Bang Con: The Live,” the record-setting online concert of South Korean juggernaut band BTS last June 14, was: The world’s most famous and successful digital natives still long for human connection.

According to the band’s label, Big Hit Entertainment, Korean and US news outlets, the concert had more than 756,000 concurrent viewers from 107 countries—an online audience enough to fill 15 concert stadiums. It is, by far, the largest paying audience for a livestream show in this pandemic.

Rolling Stone estimated that the concert yielded between $19 million and $26 million in ticket sales—at $26 ticket for official fan club members and $35 for nonmembers.

BTS has again made history. But no matter the digital coup, they still prefer a physical embrace, so much so that the boys made space on the wide stage to include ARMY—their huge fandom’s name—in their group hug. “We still want to see your eyes, hear your voices and feel your heart,” V said, based on the English translation provided during the livestream.

BTS’ commanding online presence is unmatched in the pop culture scene. The boys and ARMY regularly see each other virtually on several social media platforms. BTS and ARMY have created their personal space in the borderless internet world, with every member interacting with fans on their livestreams, Twitter and Weverse. It’s become one of the foundations of their strong connection.

But a virtual BTS concert is unfamiliar terrain, so different from live concerts where the boys and ARMY feed on each other’s energy. Nothing beats being physically together, to have that intoxicating feeling, dancing to the music, singing with Bangtan, looking up the night sky lit up by hundreds of drones, screaming the fan chant, seeing the boys wave at you, and if you’re lucky to be near the stage, having one of them smile at you.

It was hard to dance without an audience cheering them on, BTS member Suga admitted. “It was unfortunate we didn’t get to hear that. But I’m so thankful you’re here with us although you may not be here with us physically,” he said.

Among the last live performances of BTS were in the US six months ago: the New Year’s Rockin’ Eve revelry at Times Square in New York City, where thousands of fans braved the winter cold to see them; their US promo tour for the album “Map of the Soul: 7 (MOTS:7)”; and their performance at the Grammys.

Upon their return to South Korea, the pandemic had already flared up around the world. In April, Big Hit hosted a two-day free stream of the boys’ concerts through the years, generating over 50 million viewers at its peak. Shortly after, “Bang Bang Con: The Live” was announced.

Instead of an elaborate stage, Bangtan’s June 14 virtual concert was held in a big studio in Seoul that was divided into five different “bang,” the Korean word for “room,” and two stages. They were beautiful but not lavish, in seeming empathy with BTS fans the world over, who have been staying home in this pandemic.

The most technologically advanced features of the concert were the stage with an augmented reality floor, syncing the ARMY bombs from fans’ homes, and in partnership with Kiswe Mobile, six camera angles that fans could simultaneously watch (or choose from), as well as a live chat with the boys.

It felt like BTS wanted “Bang Bang Con” to be an event that would allow them to be as close to ARMY as possible—100 minutes of virtual togetherness.

Members RM, Jin, Suga, J-Hope, Jimin, V and Jungkook spoke to fans as if everybody was with them in a cozy, bright living room. The boys’ banter, their goofiness, their staring game turned “Bang Bang Con” into an interaction that made viewers laugh.

When fans thought BTS would perform songs mostly from the “MOTS: 7” album, the boys performed favorites from different eras. It was, after all, the day after their seventh year anniversary as a group.

But when the concert started with “Dope,” it was a grown-up RM who opened the door asking us, “Is this your first time with Bangtan?” followed by an already grown-up Jungkook with his “Ayo ladies and gentlemen!” They were joined by the others as they made their way to the stage performing a song about working hard at a young age to reach their dreams.

And there was “Go Go,” a song we equated with their Pokemon-inspired outfits—but this was a GQ version of it. Reality hit us hard that Sunday night: They are no longer boys.

A way to survive

Thankfully, they’ve remained nice, youthful and unassuming—as well as wise beyond their years—which makes it easy for ARMY of all ages, genders and ethnicities to have fun with them. Which was, again, what “Bang Bang Con” was all about: a way for both artist and fan to survive despite the circumstances.

BTS even did the cheering and clapping themselves, shouting the fan chant while the wall of ARMY bombs lit up just like at the stadium concerts.

The boys also teased with abridged versions of “Ugh” and “00:00” (Zero O’Clock) and bounded around the living room. Then they wondered aloud if they gave away too much because apparently, they’re still reserving performances for the day they can finally have a physical concert for ARMY. That made us curious: just how incredible will the Map of the Soul stage be?

When their sFubunits (the band divided into twos or threes)—a grouping BTS had revealed in the two-week Festa before the concert—performed on the revolving stage, we couldn’t help but imagine how it would have been in a real-life concert: JanJanKook (as Jin, J-Hope and Jungkook called their subunit) feeling ARMY’s collective sigh over “Jamais Vu” as they sing it against a black-and-white cartoon backdrop; RM and Suga, in a retro vibe, seeing everybody on their feet waving their light sticks as they dance to “Respect”; and V and Jimin, in school uniforms, hearing screams as they celebrate their remarkable friendship in “Friends.”

We would have been delirious to see “Black Swan” on a massive stage. But I’m also glad the boys performed this song in “Bang Bang Con,” because watching it on a smaller screen allowed us to appreciate the intricate choreography.

They took our breath away with the “Boy with Luv” remix and those lighted umbrellas. Some virtual fan cams caught Jin seemingly holding back tears as the boys sang “Spring Day.” Jin did remind viewers that their contract had ended June 13, their seventh year anniversary. “But thanks to (our) good agency and colleagues, we can work together for a longer time.” In 2018, BTS renewed their contract with Big Hit for another seven years.

To end the night with a song as moving as “Spring Day” was a classic BTS touch. Last Sunday, with the concert over, BTS left with this message on the screen: “We’ll go see you. Please stay there a little longer”—a line from the song. Fans didn’t turn off their devices until the screen turned black.

It was also great hearing them again sing, “Waiting for you Anpanman/ Will you muster up a bit more strength/ I’ll be your strength.”

It was a reminder that for ARMY, BTS had become real superheroes.

As they wrapped up the show, they spoke one by one, as they always did in their concerts. They miss ARMY so, they all said.

“Honestly, I’m afraid that this might be the new form of a concert,” RM said, as quoted by The Korea Herald. “I have fears. But still, we are the people who can only achieve things with your support and live by giving you hope and happiness. Starting from this concert, we will do as much as we can do. It was great to perform with my friends (bandmates) after so long,”

Jimin, as always, wanted to know how we all were. He said it was difficult for them not to be able to perform, but “We’ve been trying to grow up and overcome this time.”

J-Hope expressed hope that they gave a good performance that night, and said, “Today, after wearing all this makeup, the hairdos, microphones and in-ears after a very long time, I once again realized that this is what I do. I feel so happy performing and sweating like this.”

Jungkook found solace in watching videos of their concerts, seeing ARMY wave their ARMY bombs. With his big smile, the band’s youngest member was full of optimism: “I hope this could be the start of something new.” —CONTRIBUTED INQ