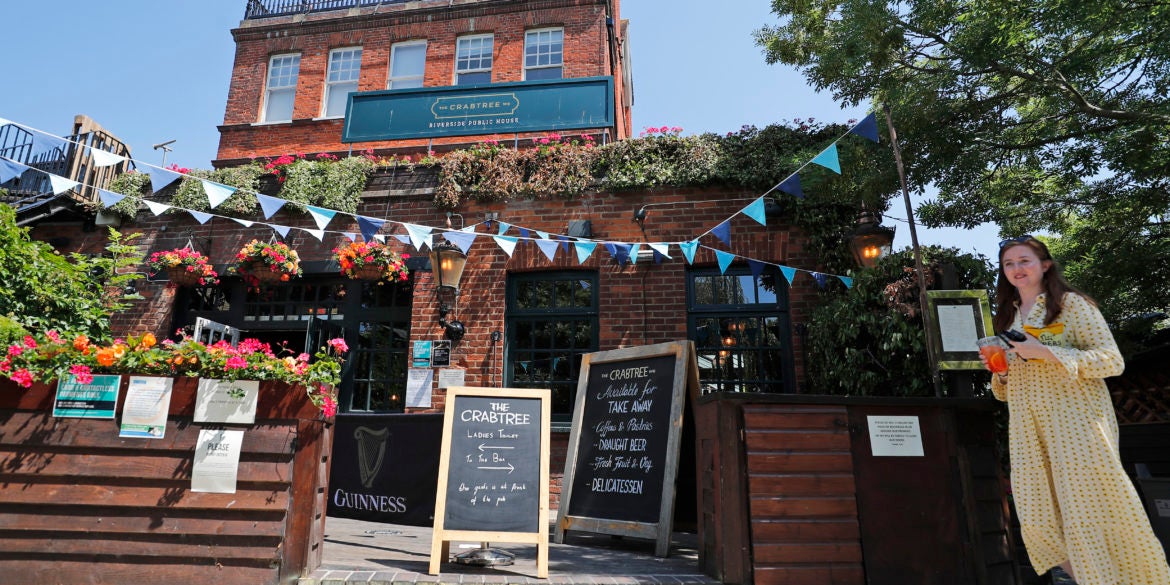 A woman carries her drinks at the Crabtree Pub in London, Tuesday, June 23, 2020. Millions of people in Britain will be able to go to the pub, visit a movie theater, get a haircut or attend a religious service starting July 4, in a major loosening of coronavirus lockdown restrictions. The government also announced that from July 4 people will be advised to stay at least 1 meter (3 feet) apart, rather than 2 meters -- as long as they take other measures to reduce transmission of the virus, such as wearing a mask in enclosed spaces. (AP Photo/Frank Augstein)

Pubs, restaurants in England to reopen as virus toll eases

LONDON (AP) — Millions of people in Britain will be able to go to the pub, visit a movie theater, get a haircut or attend a religious service starting July 4, in a major loosening of coronavirus lockdown restrictions. But they will have to wait a bit longer to see a concert, get a tattoo or go to the gym.

Prime Minister Boris Johnson said Tuesday that “our long national hibernation is beginning to come to an end,” announcing that restaurants, bars, hotels, hairdressers, cinemas, and museums will be able to reopen next month. Other businesses where people are in close contact, including gyms, pools, spas, and tattoo parlors have to stay shut for now.

“We cannot lift all the restrictions at once, so we have to make difficult judgments,” Johnson said.

The government’s decision will help thaw a British economy that has been in deep freeze since March when a nationwide lockdown was imposed to slow the spread of the virus.

Since then, Britain has suffered Europe’s worst coronavirus outbreak, with 42,927 confirmed dead, the third-highest total in the world behind the United States and Brazil.

Johnson said that the more the country opened up, “the more vigilant we will have to be.”

The government said the looser restrictions were a big step on the road back to normality. In a related move, it said it was scrapping the daily news conferences held since March where government ministers, scientists, and health officials give updates on the outbreak.

From now on, there only will be press conferences “to coincide with significant announcements,” the government said.

Starting July 4, places of worship will be allowed to hold services, though singing by choirs and congregations remains banned since it could transmit the virus. For the same reason, live music and theater performances are still off-limits.

Most international travel remains out of reach, but the government gave the green light to staycations with the reopening of hotels and campsites. For the first time since March, people will also be able to stay overnight with friends or relatives.

The government also announced that social-distancing rules will be relaxed. From July 4, individuals will be advised to stay at least 1 meter (3 feet) apart from others, rather than requiring 2 meters — as long as they take other measures to reduce transmission of the virus, such as wearing a mask in enclosed spaces.

Pubs and restaurants have been lobbying the government to reduce the distance rule, saying many will go under if customers have to stay 2 meters apart. One meter is the minimum distance recommended by the World Health Organization.

The social distancing requirement is also a concern for educators hoping to safely open British schools in the fall.

The government said businesses will be getting detailed advice on how to become “COVID-secure,” with measures including visors for hairdressers and only table service provided in bars. And it said people should only meet indoors with members of one other household at a time.

Even with those precautions, Johnson said that “as we have seen in other countries, there will be flareups” of the disease that could lead to restrictions being reimposed.

The measures announced by Johnson apply only in England. Other parts of the U.K. — Scotland, Wales and Northern Ireland — are all following slightly different lockdown plans.

Adam Marshall, director-general of the British Chambers of Commerce, welcomed the announcement but said “we are still a long way from business as usual.”

Michael Kill, chief executive of the Night Time Industries Association, said the announcement was good news for some businesses.

“But for many of our members, including night clubs, casinos and some pubs, restaurants, and bars that can’t meet the one-meter social distancing obligations, the nightmare of enforced closure goes on,” Kill said.

Some scientists are worried that the government is reopening the economy too fast and that a track-and-trace system meant to quickly stamp out any outbreaks is not fully functional.

The number of daily deaths and new infections in the U.K. has fallen significantly from its April peak, but the country is still confirming 1,000 or more new COVID-19 cases a day.

“We have to live alongside this virus for the foreseeable future,” said England’s Chief Medical Officer, Chris Whitty as he urged people to continue to take social distancing and infection-prevention seriously.

“If that does not happen, we will go back to a situation where transmission starts to rise again,” he said.

David King, a former chief scientific adviser to the government, said the loosening of lockdown was “far too premature.

“To come out of it too early is extremely risky,” he said.