How my son perfected his ‘pata tim’ and ‘sisig’ | Inquirer Lifestyle ❮ ❯ 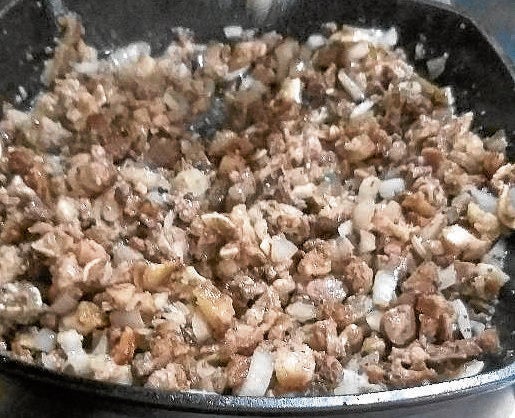 “Sisig” cooked by the author’s son Horacio, where vinegar is added at the very end.

How my son perfected his ‘pata tim’ and ‘sisig’

It’s encouraging when children take after their parents’ own interests. My first boy critiques the food he is eating at home or in the restaurant, and will eat fast food only if there is nothing else. But the second boy not only critiques, but also likes going to the market (with his father, the market man of the house). Best of all, the kid cooks.

Our Monday lunch was sisig. My husband got the hint during Sunday’s market day to buy pig’s head, where the meat is called maskara. Half of it, including the ears, was for sisig. The other half with the tongue will either be for dinuguan (if I have the courage to cook the blood stew) or tokwa’t baboy (the easier alternative). My son had to go back to the market because there was no chicken liver available last Sunday.

What is commendable with this young cook is that he experiments with different recipes of a dish and finally settles on the best one. This is how he makes the best chili con carne (if a mother can say so herself) that he offers as his birthday blowout for his office mates.

He is still not satisfied with his shrimp and okra gumbo (Alton Brown’s recipe), not due to the flavor but because he can’t get good young okra. Okra in the market or in the grocery is usually mature, tough and tasteless. In the Japanese mart, I was able to get small, very green and young okra, and they were a delight.

His pata tim has been perfected using the recipe in Larry Cruz’s book, “Malate, a Matter of Taste” (2001). He went about trying it when I told him that, at one dinner with my siblings, we had very good pata tim at Café Adriatico. This boy made pata tim because he never liked crispy pata.

But this cook will not tolerate substitution of ingredients. If there is no wansuy (cilantro) for the pata tim, he would rather not cook it. And when he uses a technique of a renowned chef, he cannot be convinced to do otherwise. Which is why his scrambled egg follows the Gordon Ramsay style.

His pancit pusit, the Cavite version known as pancit choco en su tinta, has gone through several recipe versions, and he still wasn’t satisfied. Either the squid became tough, or the ink was not enough for the sotanghon noodles.

When I told him that the adobong pusit in “The Philippine Cookbook” (Bookmark, 1990) was what Ginny de Guzman used in her restaurant, Tilde Bakery and Kitchen, where the tomatoes contribute a lot to the flavor, he tried it, and said the squid was tasty but lacked ink. Then my husband bought lumot or big squid to be grilled, so there was extra ink. Because my son had no time to cook the dish himself, he expected me to do it and told me which recipe to try. This was from “Milkier Pigs and Violet Gold” (Xochipiili, 2016), with the adobong pusit from the Malabon chapter. At last, it was successful not only because there was enough ink, but also because the squid was tender from cooking a whole hour.

Now his sisig has gone through several versions. He has used Claude Tayag’s earlier recipe in “Philippine Cuisine: A Country’s Heritage” (Monterey Farms Corp., 1995), among others. But he came back to Tayag’s newer method he found on YouTube. The vinegar is added in the end of the cooking because it has to be treated like a salad, so the seasoning is put in last.

It was the best sisig he has made, and I had to text Tayag about it. Tayag replied that if the vinegar is put in during the cooking, the sisig will be cooked like “adobo or paksiw” instead of being the kinilaw that it is.