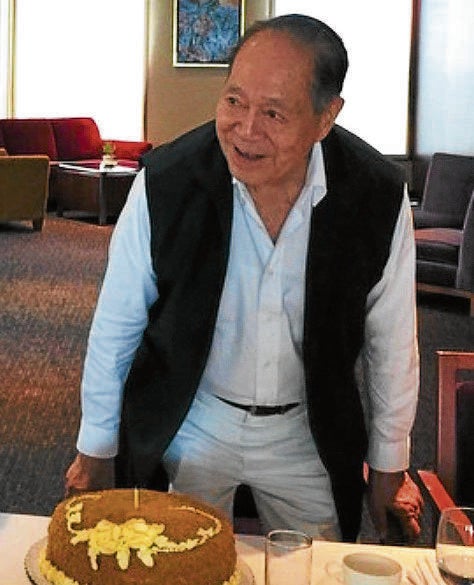 Lawyer Augusto “Jake” Almeda Lopez has never hogged the news, much less social media. That was why it was striking to see social media posts of his photo and plea that Congress “recognize the value of ABS-CBN, recognize the contribution of 11,000 employees… to the television industry in general.”

Former ABS-CBN president Charo Santos-Concio and many others posted it two weeks ago. Santos-Concio captioned her post: “I have utmost love and respect for this man! I have been so blessed and honored to have met and worked with him!…”

Not many people know of Almeda Lopez, the general manager of ABS-CBN when martial law was declared in 1972. Post-Edsa, he helped revive the broadcast firm with his bosom friend, Geny Lopez, the late chair of ABS-CBN. Almeda Lopez became vice chair.

“Atty. Jake,” as we call him, is never one to call attention to himself, like many of his generation. While his generation isn’t into social media, apparently, he must feel strongly about the uncertain future of the broadcast firm he’s devoted a great part of his life to. Indeed he must feel strongly about the present and the future of the country. He’d read the Inquirer—he still does, I hope—and sometimes we’d get a call from him to comment on issues.

He turns 92 today, June 28—his birthday is the day Geny Lopez died of lung cancer 21 years ago (in 1999) at 70 years old. The two had been close friends for more than 50 years, since 1946, when they were seatmates at Ateneo. The two were no blood relations—Atty. Jake’s family is from Quezon, Geny’s from Iloilo.

Their generation made the Philippines what it is today; they lived, for want of a better word, the most “interesting” times. Their generation put us on a roller-coaster ride that just wouldn’t stop—Marcos, Enrile, Aquino, Ramos, Tañada, Lopez, Laurel, Roxas, among others. They were protagonists who not only knew each other well, but seemed bound to each other, not only by destiny but also by their deeds.

But unlike many of the above, Atty. Jake refused to be in the spotlight of history even as he was in and out of its center stage.

More than a decade ago, when we were still with ABS-CBN magazine publishing, he allowed me and Ernie Lopez, our publishing head, to assign a writer who could interview him for his biography—but on one condition: It would not be published in his lifetime. To him, the exercise was merely to write down the events as he remembered them. And he had a vivid memory—with an able body—at that time, when he could still ride the bus at close to 90 years old.

We assigned our former Chronicle writer and former student of National Artist Rolando Tinio, Dado Luna, to interview him over a year or so. Luna wrote the biography—a draft that Atty. Jake doesn’t allow to be published.

It was only when I reread the draft this week, after I saw Charo’s Instagram post, that I realized what an adventure Atty. Jake’s life has been—a self-made adventure marked by choices of courage that put him right smack in the middle of the country’s recent history. At every turn, he didn’t have to get involved, but he did.

His journey wasn’t for the fainthearted, and his wife, Aida, a gracious woman we also got to know (she’s the aunt of our good friend, Louie Cruz), must be as steadfast as she is pliant.

Atty. Jake was born to lawyers in Quezon—his father Domingo was a Katipunero who became governor of Tayabas, his mother, Natividad Almeda, a judge who worked for women’s rights. He was called “Nene” growing up, the only boy, with two sisters, Marita and Lulu.

In 1944, during the war, at 16, he dropped out of school to become a guerilla in Quezon. He and the men in his unit lived in and out of the jungle, gathering information they could pass on to the Americans. He contracted malaria.

After the war, he campaigned for Claro M. Recto, his uncle, when Recto ran for president in 1957 with Lorenzo Tañada. Even then, he showed resourcefulness and spunk. To campaign, he formed a basketball team that included Baby Dalupan, Chito Loyzaga, who would be legends of the sport. Later he would join Tañada in the latter’s fight against the granting of parity rights to the United States, and much later in the opposition to martial law.

After Ateneo he went to the University of the Philippines (UP) College of Law. Luna wrote how, to be able to focus on preparing for bar exams and to force himself to keep away from parties and other distractions, he shaved his head. He placed third in the bar. Their batch of 1952—the first law graduates after World War II—included Salvador “Doy” Laurel who would be senator and vice president, Marcelo Fernan who would be senate president and chief justice, and Joker Arroyo who would be senator.

The young lawyer had to choose which law firm to join: Claro M. Recto’s firm, where he was asked to bring his own chair and desk, or the Alfonso Ponce Enrile firm. Because he wanted to specialize in corporate law, he joined Ponce Enrile. He was paid P3 a day and shared the office with Juan Ponce Enrile, the son of Alfonso. (Like I said, ours is a small country.)

In 1953, he put up his own law firm with colleagues Juan Campos, Fausto Gonzales, Serafin Villanueva—and married the former Aida Antonio.

Early on in his law practice, he served as legal counsel to his friend Geny, who by then, in the early ’60s, had already been tasked by his father, Don Eugenio Lopez Sr., to run ABS-CBN and Manila Chronicle. In time, as Atty. Jake juggled his time between running his law firm and teaching corporate law at UP, Geny asked his old Ateneo friend to join ABS-CBN full time, initially as personnel manager. Even in his early stint at ABS-CBN, this young lawyer experienced the government’s squeeze play with the broadcast firm, in the Diosdado Macapagal administration.

In 1972, he was general manager of the TV station, and as the famous story goes, he and Geny, with their families, the weekend of Sept. 21, were at sea off the coast of Batangas when early morning, Atty. Jake turned on the radio to listen to news but was greeted by static. Martial law had been declared and ABS-CBN shut down.

After fighting in a world war, Atty. Jake’s generation would stage another fight of their lifetime, one they thought would take only a few months. In fact, it took more than a decade for People Power to happen.

Atty. Jake was imprisoned twice—at the start of martial law, when he and his friends were caught distributing letters against the Marcos rule, and in the early ’80s, when he was caught trying to enter the country through the Sulu Sea. He and other freedom fighters stealthily took a boat from Sabah.

At that time, he and Geny, with their families, had already settled down in the United States a few years since the dangerous escape of Geny and Serge Osmeña from Fort Bonifacio in 1977. Atty. Jake, however, decided to return to Manila to continue the opposition. He was caught, his companion tortured, and he was in detention for 15 months, some of it in isolation. He was already in his 50s then. He was acquitted of rebellion charges in 1985.

Atty. Jake has always been a towering (he’s really tall) but paternal presence to our generation of media practitioners, yet I didn’t know of the adventures of his life until I reread this draft. Even if his story is worth sharing with the next generation, he doesn’t agree to being written about.

But when you’re at the point of blaming your parents’ generation for the mess your country is in, you come across the story of Atty. Jake, and you realize how some of their generation actually tried their damn best to build a country, not destroy it.