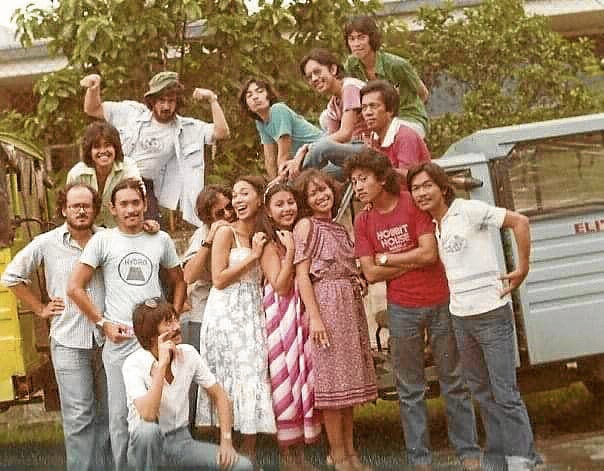 The greatest legacy of teachers is to influence the life choices of their students.

For Joel Torre and Dwight Gaston, that teacher was Peque Gallaga. They looked up to the renowned filmmaker for guiding them in their careers as actors.

Gallaga, who died on May 7 of complications from heart disease at age 76, was the award-winning production designer of “Ganito Kami Noon, Paano Kayo Ngayon?” and “City After Dark” (“Manila By Night”) and director of “Oro, Plata, Mata” and “Scorpio Nights,” among other films.

But Gallaga was a teacher at heart. He first taught drama at De La Salle University Manila (where he spent elementary and high school) and St. Scholastica’s College Manila, before moving to his native Bacolod to teach theater and film at the University of St. La Salle (La Salle Bacolod).

Torre and Gaston remember exactly when and how they met Gallaga.

In 1969, Torre, then only 7 years old, acted in a play produced by Genesis Guild, a community theater group in Bacolod of which his siblings were members.

“One of my sisters recommended me, and Peque saw the play,” recalls Torre. “Then he came to the house and told me that he’d be based in Bacolod and that he wanted me to be in all his plays.”

Torre did as he was told, acting onstage and attending theater workshops from 1970 to 1980 with Gallaga as mentor. “He was a great teacher. He loved to teach,” says Torre. “We did a small TV special, and during rehearsals he would tell me, ‘Joel, don’t act.’ I was like, huh? For a little boy, that was my biggest lesson.”

In college at La Salle Bacolod, Torre says Gallaga gave him a perfect grade of 100 in drama. “That was inspiring. I wanted to learn more.”

Torre adds that it was through Gallaga that he learned about “Being and Doing” and “No Acting Please” from the Eric Morris books.

Gaston was a college freshman in 1977 at La Salle Bacolod when his sister “forced” him into a school production of “The King and I.”

He recounts, “I met the director, a curious-looking guy with a more curious name, Peque, who had an even more ridiculous real first name: Maurice. He dressed like no one else in Negros. He had tattoos, a sure sign of ill repute. He was mesmerizing, ultracool, charismatic, and terrifying all at the same time.”

Gaston says he gravitated toward Gallaga and a theater circle which included “weirdos like Torre, Ronnie Lazaro, Kokoy Jimenez, Toto Sicangco. I fell head over heels in love with theater, and by the fourth production of that year, I was playing the lead alongside Ronnie. After that, there was no turning back.”

As Gallaga transitioned from theater to film, he also brought his protégés. He cast Torre and Gaston, with Lazaro and other theater colleagues, in “Oro, Plata, Mata,” his epic rendition of the dehumanization of war that won six awards, including best director, in the 1983 Gawad Urian.

“I would so look forward to be on the set of ‘Oro’ almost every day,” says Torre, who played a wealthy family’s scion forced to confront violence and vengeance. “In the middle of the jungle in Negros, you would see Peque weaving and waving his magical wand, orchestrating 200 people to get his perfect shot. We had this feeling that we were working on something very special and important.”

Gaston, who portrayed a singing guerrilla in “Oro,” says that in the film’s editing in Manila, Gallaga needed him to dub his songs. “But I was in Negros,” recalls Gaston. “To my shocked delight, a small Philippine Air Force airplane good for three people picked me up and brought me to Manila. Now if that isn’t pampering your actor, I don’t know what is!”

There was one incident on the “Oro” set that Torre couldn’t forget.

“We changed locations,” he recounts. “We were in a mountain resort, it was raining, it was cold and dark. The food was delayed, people were hungry and we had only two utility boys to feed everybody.

“Peque said, ‘Joel, help me.’ We picked up the food trays and walked in the rain with our umbrellas, distributing food to the cottages for the staff and crew. That’s a leader setting an example. That’s a director in charge of a production.”

After “Oro,” Gaston went on to work with Gallaga in other projects. “I wrote teleplays for him, including ‘Tore ng Babel,’ and some screenplays including two ‘Shake, Rattle and Roll’ episodes. I also did the conceptual costume designs for ‘Batang X,’ both versions.”

In “Scorpio Nights,” Gallaga’s steamy film on voyeurism, Gaston played an Ilonggo student. “I had the honor of saying the first line in the movie: ‘Beeelatibay ya!’

“When you came to his shoot, the wonderful and scary thing was that he would already be there, fully prepared. Wonderful because, as many of my fellow actors have attested, his preparedness and thorough knowledge of what we were to shoot gave us solid wings to soar on and fully utilize our craft. Scary because if you came unprepared, woe upon you. But he never cursed his actors. Only once or twice, but only for effect.”

How big an influence was the filmmaker on them?

“Not only did he influence me, he was responsible for my career,” says Torre. “I always told him I owe him my career. After ‘Oro,’ he told me which manager to get. I would consult him in some choices I would make. He helped shaped me to become an actor.”

Says Gaston: “Peque opened a door to a universe I would belong to. He made me discover that I could be a jack of all trades.”