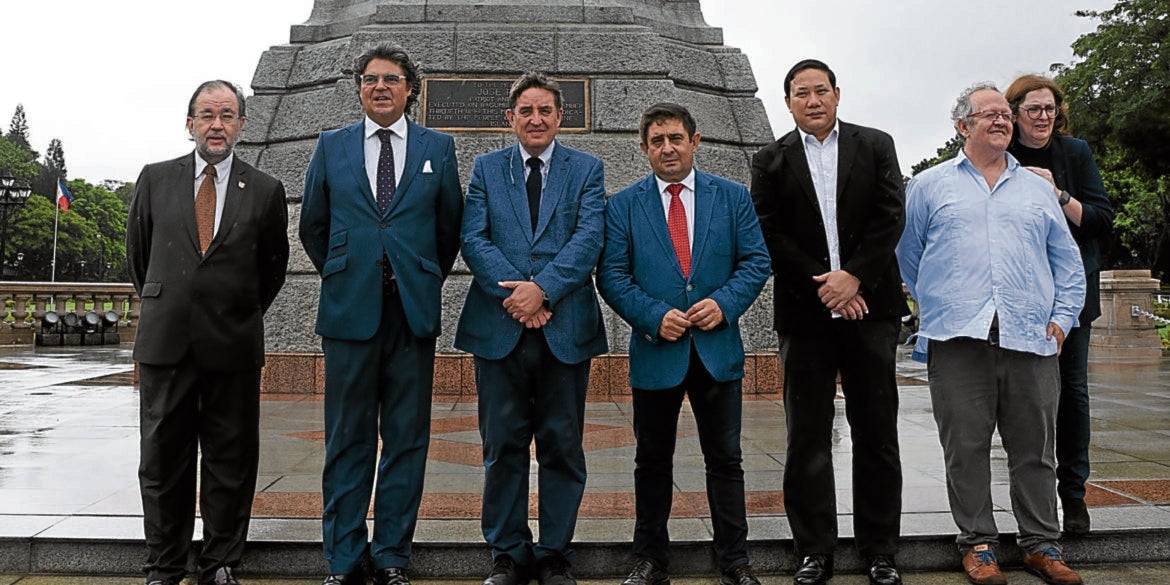 Instituto Cervantes director general Luis García Montero (third from left) paid homage to José Rizal at Luneta Park in September 2019. With him were the author and Spanish Ambassador Jorge Moragas (first and second from left, respectively).

Since 2003, the Spanish-Philippine Friendship Day has been celebrated enthusiastically, mainly but not only, in Baler. This year the celebration will have a more restricted and reflective nature, which evokes a recent event that emphasizes in a special way the richness and the complexity of the friendship between the Philippines and Spain.Luis García Montero, director general of the Instituto Cervantes, visited Manila in September 2019. Although in recent times we have had visits from secretaries-general, we have not received in Manila a director of the Instituto since May 1994, when Nicolás Sánchez Albornoz accompanied Her Highness the Infanta Elena at the inauguration of the premises of the then recently created Instituto Cervantes, which had taken over the former Cultural Center of the Spanish Embassy.

The immediate reason for García Montero’s visit to Manila was the closing ceremony of the traveling exhibition, “Miguel Hernández: In Broad Daylight,” on display on the premises of the Instituto in Casa Azul in Intramuros, which also shelters the library named after the poet Miguel Hernández.

The libraries of the Instituto Cervantes centers are named after writers in the Spanish language, sometimes closely linked to the city in which they are located, and sometimes—as is the case of Manila—not linked at all.

Despite the short duration of his stay in Manila, García Montero, who is one of the most outstanding contemporary poets in the Spanish language, included in his busy program a visit to the Luneta Park where, with the Spanish Ambassador Jorge Moragas as a witness, he paid tribute to José Rizal. Just two months earlier, in a speech to the directors of the Instituto Cervantes centers at the beginning of their annual meeting, he remarked on the sonnet of Miguel de Unamuno, “The Blood of the Spirit,” in which the great Basque writer and philosopher expressly quoted Rizal, of whom he said he felt like a brother.After the earnest tribute to Rizal, the solemnity of which was reinforced by the gun salute by a unit of the Philippine Navy and by the timely arrival of drizzle and heavy monsoon rain, García Montero closed the aforementioned exhibition at the Casa Azul and presented the book, “Una Querencia Tengo por tu Acento: Four Filipino Writers on Miguel Hernández,” published for the occasion.

This chain of events gave meaning to the Manila library’s dedication to the figure of Hernández, who, like Rizal, was a poet whose work and life served as a fruitful seed for the freedom of his people. Past and present overlapped on that rainy September afternoon, where pieces of an atemporal puzzle fit together smoothly and naturally. The dedication of the Instituto Cervantes library to a poet who had been the victim of fratricidal incomprehension, highlighted the fact that Rizal was also a victim, not of colonialist tyranny, as has been claimed, but of that same fratricidal polarization that seized Spain in the 19th century and a good part of the 20th century.García Montero’s gesture implicitly carried a profound semantic charge. Rizal, as a defender of freedom and as a victim of the intolerance of his time, was one of us, like Hernández, like Federico García Lorca, like Unamuno, Maeztu and so many others. —CONTRIBUTED INQ