Brownie biscotti from a boxed mix

It was such a pleasant surprise to receive a jar of chocolate biscotti last week from my friends at the Maya Kitchen. After all, these Italian biscuits are not so readily available in local stores and bakeshops.

Maybe that’s because biscotti must be baked twice, thereby requiring twice the time and twice the effort. The first baking is to cook the actual dough. The second is to crisp them, after they’ve been cooled then sliced into elongated oval shapes, or sometimes into sticks.

But the results are worth it. After they’ve been baked the second time, the biscotti come out very crisp and tasty. They make the ideal companion to a cup of hot coffee (cappuccino would be great) or perhaps some cold fruit juice, hot tea or even as something to nibble on with a dish of ice cream. It’s also a practice to dunk biscotti in your drink, but I prefer not to, as that would obliterate some of its crunchiness.

Because they’re baked twice, these Italian biscuits are hardy, thereby making them the ideal biscuits to take along—as baon for school or the office and for long trips. You can store them for days (in a tightly closed container).

Not only did Maya send me the biscotti, they also sent me the recipe, so now I can make my own chocolate biscotti whenever I want.

What makes the recipe easy to follow is that it starts with a boxed mix, Maya’s Decadence Fudge Brownie Mix. That means I can skip some of the steps such as measuring the flour, sugar, baking powder, etc. All I have to do is beat the mix with butter, eggs, water and almonds, and it’s ready for the first baking in the oven.

Although the recipe lists almonds as the nut of choice, you can also use pistachios or cashews. The almonds, though, add their own sturdy character and crunch to the biscotti so you may want to stick to that. 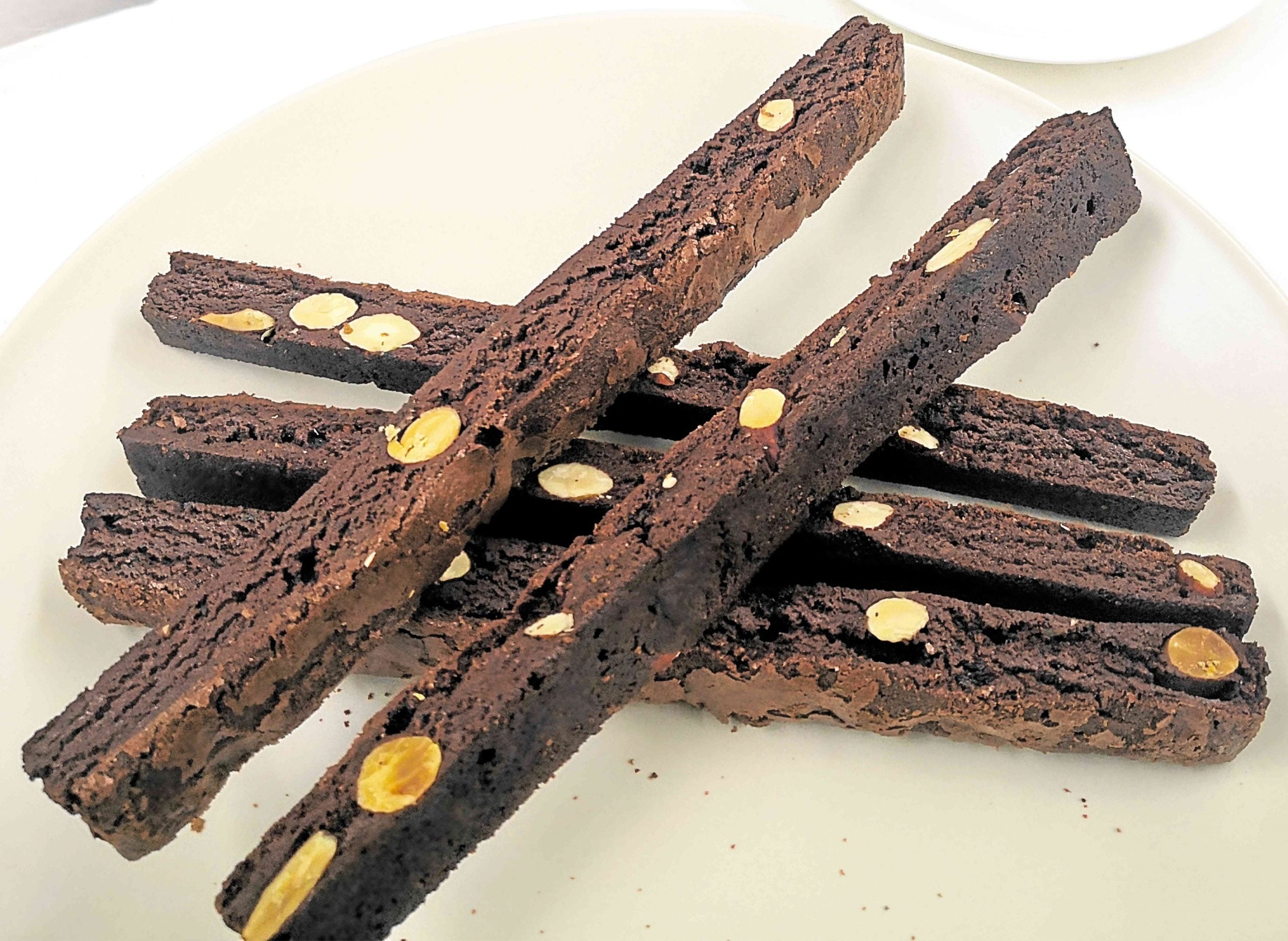 Combine the brownie mix, butter, eggs, water and almonds in a mixing bowl. Beat until well blended. If using the two pans, divide the mixture equally between the two pans. If using one pan, pour the entire mixture into the pan.

Bake in the preheated oven for 30 to 35 minutes. Remove from the oven and allow to cool completely.

When the brownies have cooled, remove them from the pan. If you used the two pans, slice each brownie into 12 sticks per pan. For the larger pan, slice the brownie vertically into about one-inch sticks. You should have about 12 to 13 sticks. Divide each stick in half. You should then have about 24 to 26 sticks.

Lower the oven temperature to 300ºF (149ºC). Arrange the brownie sticks on a cookie sheet, with the sliced side up. Bake for 15 minutes. Turn the sticks over and bake the other side for another 10 to 15 minutes, or until the biscotti feels hard enough to the touch. Remove from the oven and let cool slightly before serving. Store in an air-tight container.

You can use more than one cup of almonds if desired. Almonds add more flavor and a nutty texture to the biscotti.

Maya Decadence Fudge Brownie Mix is available in the baking section of supermarkets and groceries.