A mall-based clinic to treat low back pain | Inquirer Lifestyle 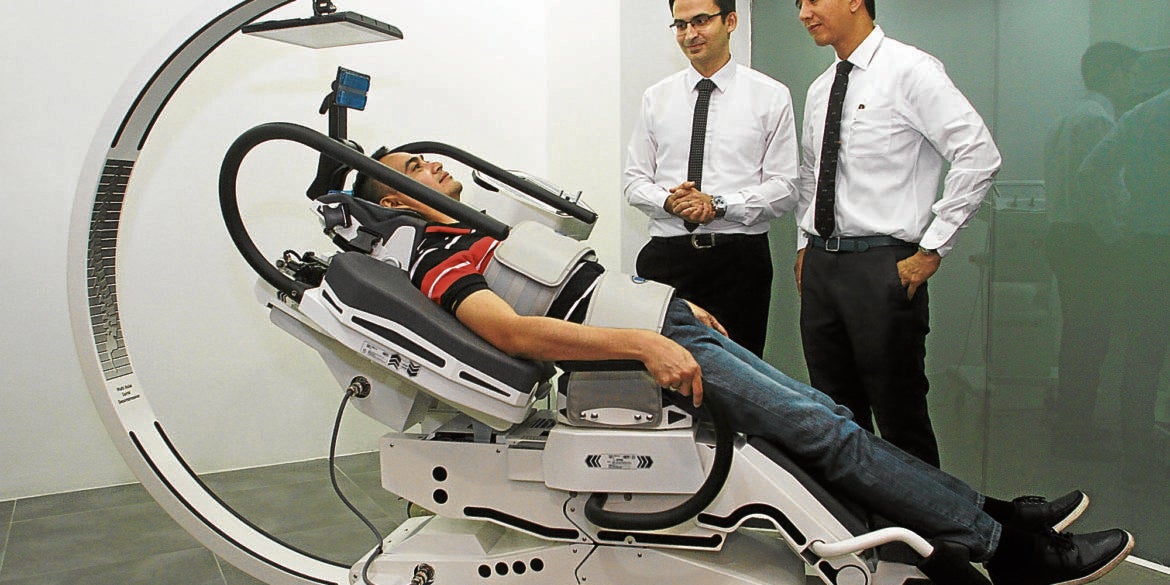 Doctors of chiropractic Abdel-Rahman Djrayya and Martin Camara with the robotics spinal decompression machine, used for nonsurgical decompression of the lower back and neck

A mall-based clinic to treat low back pain

The condition could cause headaches, joint pain and disturbed sleep, and its mismanagement is a global dilemma

Low back pain is the world’s No. 1 cause of disability, says the World Health Organization (WHO). Moreover, 80 percent of the population experiences low back pain in their lifetime, states the National Institute of Neurological Disorders and Stroke in the Unnited States.

Dr. Martin Camara, CEO of Intercare Healthcare Systems, explains that the repercussions of low back pain could also cause headaches, joint pains and disturbed sleep. “Many people are suffering from problems that affect muscles, bones and nerves. When mobility is interrupted, the ability to engage at work and with the community is affected. In developing countries like the Philippines, people lose the ability to provide for themselves and their families when their bodies can’t function properly,” he says.

It’s not just the ailment that’s a problem. A bulletin from the WHO likewise cited research that mismanagement of low back pain is a global dilemma. Patients have been receiving health services that disregard international rules.

Camara has seen the rise of dubious “chiropractic” chains in the malls. He also warns against any procedures performed by staffers with no medical background.

On the value of regular treatments of chiropractic adjustments and spine care, he explains, “Your body adapts to the changes that have been introduced, whether it’s better alignment, less muscle spasms, more mobility and rest. In the recovery phase, your body becomes stronger, and then the next treatment comes. You’re building on the foundation of what you did before, and then you introduce even more changes. The general average would be 12 to 18 sessions for over a period of four to eight weeks. You will see remarkable changes in mobility, sleep; the general well-being improves.”

Some mature patients can walk faster than their batchmates because of maintenance chiropractic treatments.

The mall clinic offers chiropractic adjustments as well as Class IV therapy laser, using infrared energy that goes deeper into specific areas and shortens treatment times. “Most traditional physical therapy instruments such as ultrasound or superficial heat only penetrate one to three millimeters. The laser can penetrate all the way down to the deepest structures of the spine,” says Camara.

This noninvasive treatment is recommended for muscle and ligament tears, ligament sprains and cartilage problems. “We’re using it for back pain, for slipped discs, and all sorts of pain in the nerves that are shooting sharply or tingling down the leg. It can also be used to improve circulation,” explains Camara. “It relieves pain and inflammation, but more important, it regenerates cells and stimulates the healing.”

One of the common manifestations of back pain is a herniated disc, which occurs when a slipped or ruptured disc irritates a nerve.

New York-trained Dr. Abdel-Rahman Djarraya, SpineCare’s chiropractic specialist, observes that sitting for long hours, the wrong posture in lifting objects and hunching over gadgets can cause pressure on the spine. “Over time, the constant compression of the discs results in dehydration and eventually, disc degeneration. Since these discs are under constant pressure, the ability to get the fluids—the nutrients that go inside the discs—is hampered. That’s why some people feel pain even while they’re resting or sleeping,” says Djarraya.

He cites robotic spinal decompression therapy that can help whichever segment of the spine is compressed. This is a type of mechanized traction that gently lengthens the spine and returns it to its natural alignment. It relieves the pressure on the discs, the cushions between the bones in the spine, creating negative pressure in the disc. Bulging disks are withdrawn, relieving pressure on the nerves and other structures in the spine. This, in turn, helps promote the flow of water, oxygen and other nutrients into the discs for healing.

“Most traction devices have only one machine to pull in one direction,” says Camara. “This machine has 12 different motors that can stretch the spine and all of the discs from the neck all the way down to hydrate the individual discs and repair the damage discs.”

Depending on the patient’s condition, robotic spinal decompression therapy takes 10 -30 minutes, and between nine and 18 sessions.

Djarraya claims that he had a patient who couldn’t sleep, as she felt the pain radiating from the neck down to the arms. Her pain was reportedly reduced by 40 percent by the second session, and she was totally relieved in nine sessions, he says.

Another patient had a bulging lumbar disc that was giving extreme low back pain. After the seventh session, Djarraya says, she became more mobile and the leg pain was gone. —CONTRIBUTED INQ