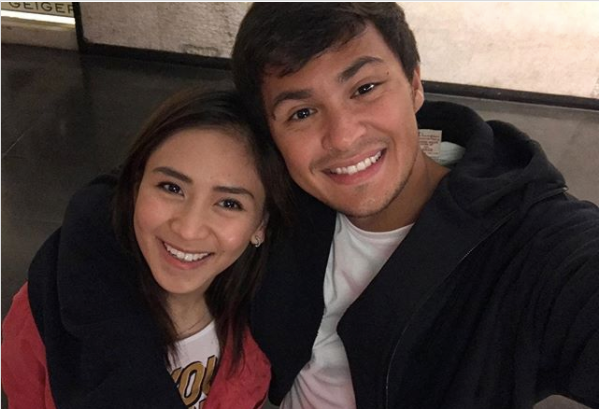 There’s never a shortage of things to get giddy about in the AshMatt universe.

Just take the case of that short clip posted by the fan account @ashmatt_love on Instagram on July 6, showing Matteo Guidicelli holding a pair of sneakers. Fans of the actor and his wife, Philippine pop princess Sarah Geronimo, were quick to think that it evokes a sweet act of kindness, as the post also stated the following:

“Possible scenario this morning in the condo carpark:

“Sarah: Love nakalimutan ko yung sneakers ko na gagamitin ko sa rehearsal sa ASAP (I forgot my sneakers which I will use in my ASAP rehearsal).

“Matteo: Ah ganun ba (Is that so)[?] Ok love I’m gonna go back up to our unit and get them for you. Wait here in the car na lang. #husbandduties.”

Ashmatt_love is a fan club Instagram account which posts photos and videos of the young couple from time to time, the most recent of which, two days ago, was a short clip showing Sarah and Matteo’s relatives cuddling cute white puppies, and a photo which showed Matteo’s family holding cupcakes baked by Geronimo herself.

Matteo’s clutching of Sarah’s sneakers drew nothing but admiration from fans and followers.

One @cristymirabel also described Matteo as “super sweet” while cathie.cayabyab.7 said, “sana all lht ng husband gaya n matteo (I hope all guys are like Matteo).” Another commenter, @esitjohnmontajes, felt the Kapamilya actor is a “great husband.”

Meanwhile another Instagram clip posted on the same day caught Geronimo’s hosting gaffe as she unwittingly displayed her Visayan accent in her spiel.

“Makihugot sa kantahan kasama sina Angeline Quinto at Erik Santos… Naging Bisaya na ako (dahil) sa asawa ko,” she said in the clip. (Let’s sing together with Angeline Quinto and Erik Santos. Oh my, I have already become Visayan, thanks to my husband.)

But fans instead raved about it in the comment section.

For @chardlaagan, “This is the cutiest video i’ve seen this week.”