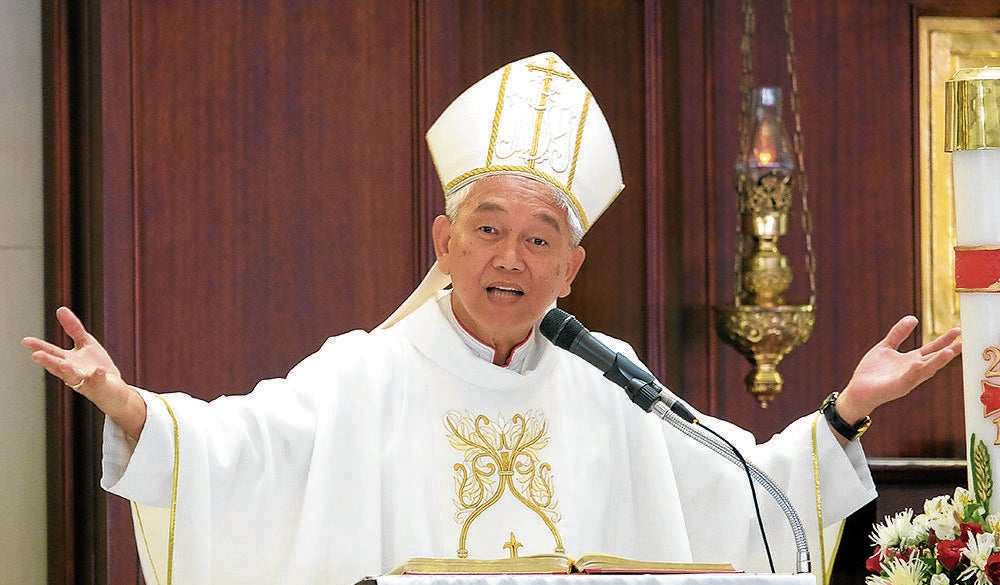 Bishop Broderick Pabillo: Many were affected mentally and spiritually.

‘No COVID-19 will stop the Church from doing her mission’

MGCQ is the most relaxed form of community quarantine. Under its rules, religious activities are allowed at 50-percent capacity of the venue.

When Tarlac’s GCQ status ended on June 30, Bishop Enrique Macaraeg issued a circular dated the same day announcing that “parishes and chapels in the Diocese of Tarlac may resume public worship or Masses with congregation beginning July 1, 2020.”

Bishop Macaraeg reminded the priests and the faithful about minimum public health standards set by the Inter-Agency Task Force for the Management of Emerging Infectious Diseases (IATF) on the new coronavirus disease (COVID-19) and the Catholic Bishops’ Conference of the Philippines to prevent virus transmission, such as “temperature check; no-mask, no-entry; availability of hand-washing stations or alcohol-based hand rub; strict physical distancing measures.”

He also encouraged the children, elderly, individuals with underlying conditions and pregnant women to stay home. He added that the general dispensation from the obligation to attend Sunday Mass remained in effect.

In an interview with Lifestyle, Bishop Macaraeg said the Church would “continue her mission under the ‘new normal.’”

“No COVID-19 will stop or prevent her from doing her mission,” he declared.

After Bishop Macaraeg issued his circular, the other dioceses in Region III followed suit. The Diocese of Malolos in Bulacan announced the resumption of public Masses at 50-percent capacity on July 3.

But in nearby Metro Manila, Catholic churches can hold public Masses only for 10 people, after the GCQ status for the National Capitol Region (Metro Manila and Rizal) was extended to July 15.

Earlier, in a Facebook post, Bishop Broderick Pabillo, apostolic administrator of the Archdiocese of Manila, said the limit for religious services imposed by the IATF was unreasonable and even “laughable.”

Pabillo questioned the IATF’s basis for limiting Mass-goers to five during the modified enhanced community quarantine (ECQ) and 10 during the GCQ. He pointed out there were no such limits for business offices and commercial establishments.

Pabillo said many Catholic churches are big so that to apply on them a “one-size-fits-all” directive would be “laughable.”

He said the problem with government is that it does not consult sectors that would be affected by its regulations. “They make arbitrary decisions without proper consultation with the sectors involved, so they come out with unreasonable directives.”

The gross disparity between allowing malls and commercial establishments to admit any number of shoppers and limiting churches to 10 worshippers has been criticized by Church leaders, some of whom see it as covert persecution of the Catholic Church.

In a recent homily, Lingayen-Dagupan Archbishop Socrates Villegas said as much: “I am very afraid that there is an implied persecution of our faith because going to Mass, attending the Eucharist, worshiping the Lord, is lumped in the same group as going to the barber shop and going to the theater to watch a movie.

“The malls have opened, the markets are open, the offices are open, and what do they say about the Church? Under general quarantine, only 10 people. Is that fair? Is it just? Is it just to be prevented from worshiping the Lord in spirit and in truth?”

The debate has shades of the one obtaining now in the United States, where churches have complained that they have remained closed or limited to only 10 public worshippers, while liquor stores have been classified as “essential services” and allowed to operate, and states and local governments have allowed antiracism demonstrators to assemble and march without face masks.

Philippine churchmen have maintained that religion helped ease the anxiety and stress of the pandemic, enabling people to cope, survive and endure.

Psychologists and educators said religion should be considered an “essential service” during pandemics and disasters.

Christianity and cultural heritage proved “essential” in making people cope with anxieties while on lockdown, said Arvin Manuel Villalon, consultant for cultural mapping of the National Commission for Culture and the Arts and a member of the Technical Panel for Cultural Education of the Commission on Higher Education.

He explained that during the lockdown, people turned to Christianity and religious rituals because “religion is an intangible cultural heritage.”

Villalon said cultural heritage could also help in “normalizing” the situation after COVID-19. “Heritage is one way of restoring normalcy,” he explained. “Heritage comes from a sense of identity and rootedness.”

In an interview with the Inquirer, Bishop Pabillo said to limit Mass attendance to 10 in a church that could hold 2,000 people was “simply not logical.” “There is more logic in prescribing safety measures such as maintaining 1-meter physical distancing,” he pointed out.

In fact, he said the archdiocese had been mulling heightened safety measures should government relax quarantine rules by July 15.

“These guidelines are given so that we are prepared when religious services will already be allowed,” he added.

The guidelines are outlined in the “Protocol for Religious Services of the Archdiocese of Manila” that the Manila prelate issued recently.

Among the measures is a half-hour gap between Masses to allow for disinfection after each service. Since this would limit the number of Sunday Masses, weekday Masses would be encouraged.

Bishop Pabillo, like Bishop Macaraeg, will retain the Sunday Mass general dispensation. “The presence of difficulty, and in some cases impossibility, of fulfilling the Sunday obligation renders the obligation suspended during these extraordinary circumstances,” Pabillo’s guidelines said.

Livestreaming of Masses “will continue for those who are unable to participate in the community celebrations due to sickness, old age, fear and caution.”

And because there will be less number of Sunday Masses, Pabillo said churches could start their “anticipated Masses” on Saturday as early as 3 p.m. Churches then could have “three or four” Sunday Masses on a Saturday, he added.

Aside from strict physical distancing rules in seating and moving about the church, Mass-goers will be advised not to touch or wipe the religious icons. “All holy water fonts should be emptied and covered so that they may not be used,” the protocols said. Perpetual adoration chapels are advised to remain closed.

During Masses, everyone should wear face mask; this will be enforced by marshals. Those who have no face mask can buy from the parish office.

Bishop Pabillo said the pandemic and ECQ came during the Church’s most important seasons of Lent and Easter.

“It’s saddening that this year we weren’t able to have a meaningful celebration of the Holy Week and other important liturgical celebrations due to the pandemic,” the Tarlac prelate said.

But there were positive things from the pandemic. “We had something that we didn’t have before—time,” Pabillo said. “It was time well spent. People realized they needed only the bare essentials. That they need not go malling to be happy. They just have to be together with their family and their faith.”

He added that because of the ban on public worship, the Church broadcast Masses on radio and TV or streamed them online. Even Protestants and other non-Catholic Christians followed the broadcast or online Masses, he said.

Although its social communications ministry had been there all along, the lockdown hastened the Church’s migration online.

“The internet has been an important tool to continue providing the faithful an avenue for them to participate and receive the spiritual nourishments they need,” said Bishop Macaraeg. “On a positive note, this difficult situation brings out the richness and relevance of the faith in every human situation.”

Bishops Pabillo and Macaraeg said the months-old ban on public worship affected churches financially. But the more urgent priority is helping the poor.

“Parishes were also financially challenged due to the closing of churches, yet outreach programs continued through the initiative of the parish priests in collaboration with Caritas Tarlac, the social arm of the diocese,” Bishop Macaraeg told Lifestyle. “This was made possible because of the continued support of some generous benefactors and parishioners.”

Bishop Pabillo urged that the churches be opened at fuller capacity so that they could better serve the poor. He said the poor have been the most vulnerable sector and the worst hit by the pandemic.

Like Caritas Tarlac, Caritas Manila (CM) has been helping the urban poor of Manila.

According to CM, its Project Damayan helped distribute P1.37 billion worth of food vouchers to 1.37 million families in Metro Manila during the ECQ.

Project Damayan was made possible by Project Ugnayan, a fundraising initiative of the country’s top businessmen led by Fernando Zobel de Ayala in coordination with the Philippine Disaster Resilience Foundation.

“The pandemic,” said Bishop Macaraeg, “has taught us to enhance more the social action arm of the diocese to be always ready and equipped to respond to the needs of the people in times of disasters and calamities.

“But of course,” the Tarlac prelate added, “we will observe the [safety] protocols so as not to compromise the health of each faithful. We will continue to pray for those infected by the virus, for those who have died, for our front-liners, for our government leaders, and that this virus will end soon.”

Bishop Pabillo said the Church would cope with the “continuing fear” of the pandemic. In the absence of a vaccine in the near future, the situation may be protracted. “It may be here to stay,” he said.