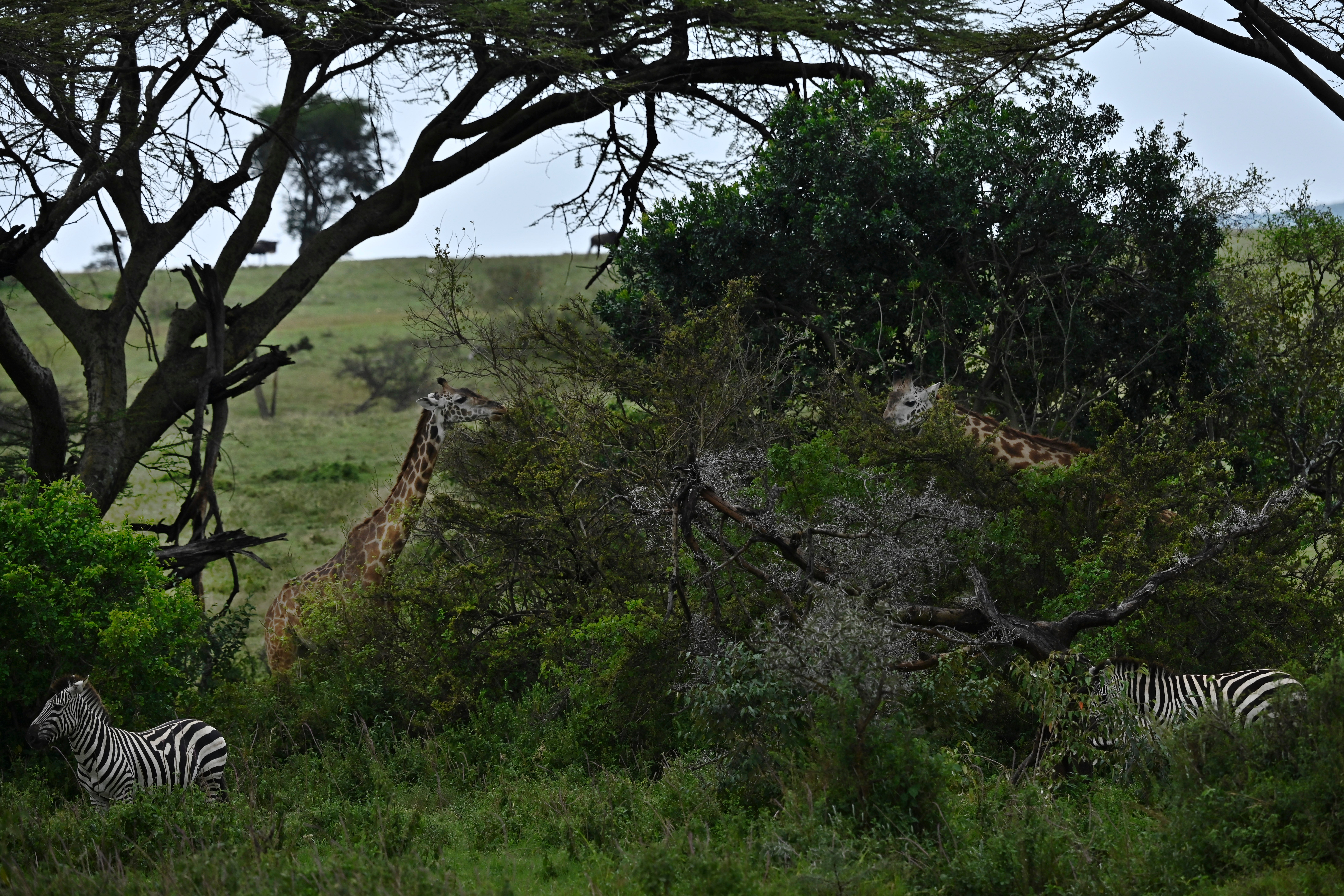 Giraffes of the 'Masai' sub species forage in a grove alongside Common Zebra at the Ol Kinyei conservancy in Maasai Mara, in Narok county in Kenya, on June 23, 2020. - At the heart of the majestic plains of the Maasai Mara, the coronavirus pandemic has led to economic disaster for locals who earn a living from tourists coming to see Kenya's abundant wildlife. Even before the virus arrived in Kenya mid-March, tourism revenues plummeted, with cancellations coming in from crucial markets such as China, Europe and the United States. (Photo by Tony Karumba / AFP)

In the majestic plains of the Maasai Mara, the coronavirus pandemic spells economic disaster for locals who earn a living from tourists coming to see Kenya’s abundant wildlife.

Even before the virus arrived in Kenya mid-March, tourism revenues had plummeted, with cancellations coming in from crucial markets such as China, Europe, and the United States.

According to the tourism ministry, the sector has lost $750 million this year — roughly half of the total revenue in 2019.

“We were fully booked in June but now we have zero bookings. Nothing. It’s terrible,” said Jimmy Lemara, 40, the manager of an eco-lodge in the private Ol Kinyei conservancy.

In the Maasai Mara, one of Africa’s most highly-rated wildlife reserves located in the vast flat plains of the Great Rift Valley, the local Maasai community, traditional herders who make up 2.5 percent of the population, now depend almost exclusively upon tourism for their livelihood.

In a unique model set up to engage local communities in tourism, enabling them to see the value of wildlife and thus protect it, the Maasai now get revenue from renting their land to form private wildlife conservancies.

Some work as cooks, guides, and security guards in the lodges while others give tours of their traditional homes or sell homemade crafts to tourists.

– ‘Survival mode’ –
People in Talek, a dusty town situated at one of the entrances to the Maasai Mara national reserve, are gloomily buckling down, hoping for better days.

Kenya has announced international flights will resume on August 1, but the high season is already lost.

“It’s been three months that I haven’t sold anything,” the 45-year-old told AFP.

“This is terrible. Everything is stuck. Everything is shut down. (I have) never seen something like that”, said tour guide Petro Nautori who has had no work since January.

The Maasai Mara national reserve, run by the Narok county government, extends to the north with several privately-managed conservancies renting land from the Maasai who in exchange do not graze their cattle or settle there.

This model has since 2005 allowed the doubling of the habitat for wildlife in this area.

On average, each landowner earns $220 per month, far more than the minimum wage in the area.

However, like other conservancies, Ol Kinyei is struggling and has agreed to only pay half the usual rent to the Maasai, after having to pay back deposits to tourists who cancelled their holidays.

The salaries of lodge employees have also been cut by half.

– Forced to sell livestock –
Some Maasai families are having to turn to selling their precious livestock to earn money.

“Because we’re getting little and it’s not enough to sustain the family for a living, I had to sell two goats worth about 12,000 shillings to put on top of what I’m getting to keep me going,” said Julius Sanare, 41, head chef at the eco-lodge in Ol Kinyei.

However, livestock markets have been shut due to coronavirus prevention measures.

Residents said the Maasai are instead selling their animals on the black market for a pittance to unscrupulous buyers taking advantage of their desperation.

Mohanjeet Brar, managing director of Porini safari camps which run two conservancies and several lodges in the Mara, said the “catastrophic” situation could threaten the existence of the reserves.

“If the landowners are not getting any revenue, they can’t feed themselves, they can’t send their kids to schools, they would have no option but to look at other forms of land utilization,” he said.

“Fencing it off, selling it to people, building businesses… all those alternate land uses don’t go together with wildlife and elephants and big cats and so this would be completely lost,” he said.

“And once it’s lost, if you look at Kenya and its very fast population growth rate and good economic growth over the last few years, it would be lost forever. It would be a real shame.”