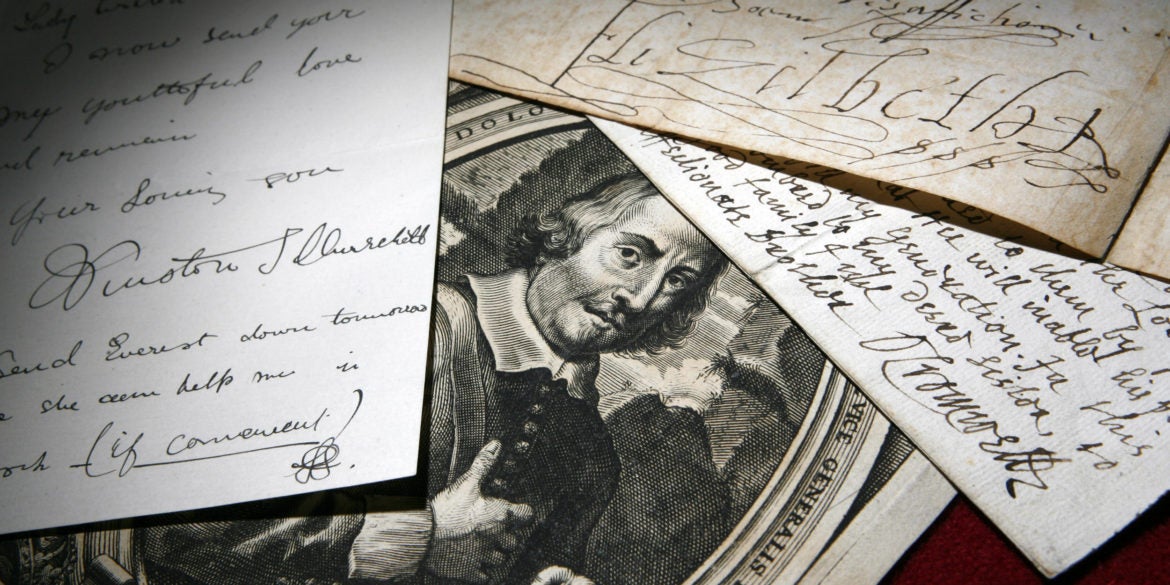 Handwritten letters by Winston Churchill, (L) Queen Elizabeth I (Top) and Oliver Cromwell (R) are pictured at Christies Auction House in central London, 26 June 2007. The letters are a part of the 'Albin Schram Collection of Handwritten Manuscripts' that are to be auctioned at Christies in London, 03 July. AFP PHOTO/LEON NEAL (Photo by LEON NEAL / AFP)

Queen Elizabeth II was not informed in advance about the 1975 dismissal of Australia’s prime minister by her representative in country, letters kept secret for decades and released Tuesday revealed.

In May the High Court ruled more than 200 letters between the queen’s private secretary and Kerr — including many addressing the controversial affair — should be made public.

Although the correspondence show the queen was not told immediately prior to Whitlam’s sacking, they confirm that Kerr had exchanged extensive letters with the palace for months about his powers to oust the prime minister.

Suspicion the palace played a direct role in Whitlam’s ouster has long been cited by Australian Republicans arguing the country should break with the monarchy.

The National Archives of Australia released the 1,200 pages known as the “Palace Letters” on Tuesday after a four-year court battle to keep them hidden that reportedly cost Aus$2 million ($1.4 million).

Historians are now combing through the documents to see if the British government tried to influence events in its former colony and what role the queen, Prince Charles and top royal advisers may have played.

One key extract shows Kerr informed the queen he had fired Whitlam shortly after taking the action on November 11, 1975.

“I should say I decided to take the step I took without informing the Palace in advance because, under the Constitution, the responsibility is mine, and I was of the opinion it was better for Her Majesty not to know in advance, though it is of course my duty to tell her immediately,” he wrote.

The letters confirm the palace knew Kerr had been considering the options available to him under his Constitutional “reserve powers”, which included dismissing Australia’s leader, an action no other governor-general has taken before or since.

“I’m also keeping my mind open as to the constitutional issues,” Kerr wrote to Martin Charteris, the queen’s private secretary, on September 12, 1975.

Charteris later praised Kerr for his approach, writing a week before the dismissal he was “playing the vice-regal hand with skill and wisdom”.

“The fact you have powers is recognised. But it’s also clear you will only use them in the last resort, and then only for constitutional — and not for political — reasons,” he said.

Professor Jenny Hocking, a biographer of Whitlam who took the case to court, said the political nature of the correspondence was “startling” given the requirement for the head of a constitutional monarchy to remain neutral.

Hocking said the discussion of reserve powers in particular was “scandalous” because its existence in Australia is “highly contested” by legal and political scholars.

Fraser went on to win a landslide election victory later that year.

Though Australia became independent in 1901, the queen is still head of state.

A referendum on becoming a republic failed in 1999, but republicans hope recent royal scandals could help revive efforts to cut ties with the monarchy.

Labor leader Anthony Albanese described the dismissal of a democratically elected government as “a blight on our character as a nation” that “reinforces the need for us to have an Australian head of state”.

Cover image: Handwritten letters by Winston Churchill, (L) Queen Elizabeth I (Top) and Oliver Cromwell (R) are pictured at Christies Auction House in central London, 26 June 2007. The letters are a part of the ‘Albin Schram Collection of Handwritten Manuscripts’ that are to be auctioned at Christies in London, 03 July. AFP PHOTO/LEON NEAL (Photo by LEON NEAL / AFP)