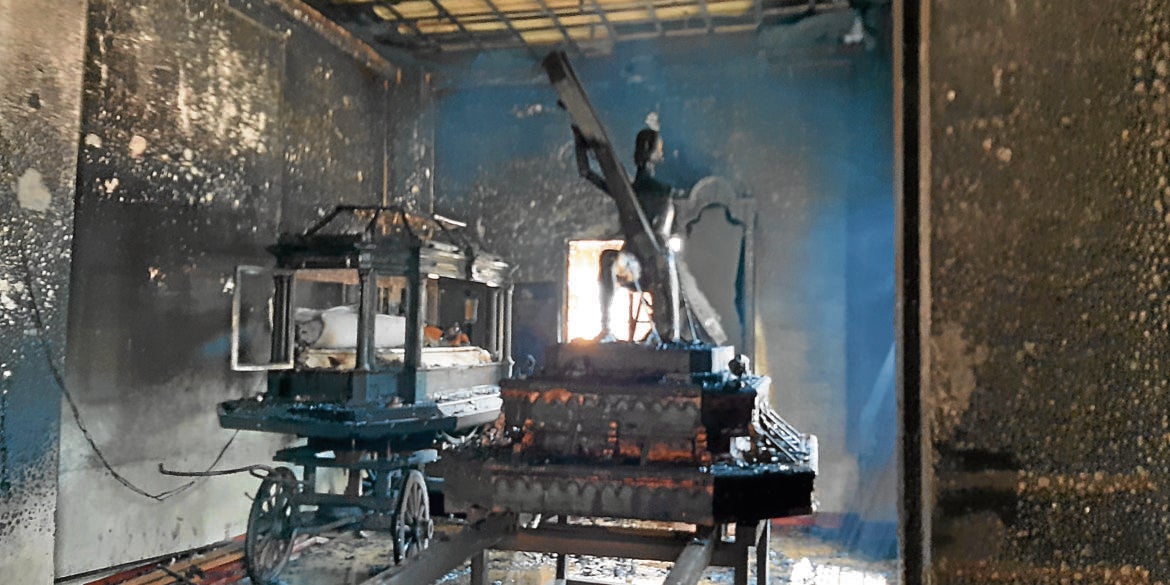 After a fire gutted the Sto. Niño de Pandacan Church in Pandacan, Manila, last July 10, heritage advocates said the destruction of the celebrated wooden icon of Santo Niño and other centuries-old liturgical artifacts is a heartbreaking loss for Philippine cultural heritage.

“This is indeed a big artistic and cultural loss, not to say a loss for church cultural heritage,” said ecclesiastical historian Regalado Trota José, a former commissioner of the National Commission for Culture and the Arts.

“Its eyes are wide, which invites us to compare it with Our Lady of Antipolo, which arrived from Mexico, and the Santo Niño of Ternate, Cavite, which was brought from Ternate, Indonesia,” he told Lifestyle.

“All three are from the 17th century,” added José, also the archivist of the University of Santo Tomas.

Arson investigators said the fire likely originated on the second floor of the church where the image was enshrined in a chapel.

Also burned was the Santo Entierro, the image of the entombed Christ, which is usually paraded on Good Friday.

“The Santo Entierro was also famous, but I don’t know if it’s the same Spanish period image that was burned (Friday),” said José. “An image of it embroidered in silver and gold thread, with silver fittings, is in the Intramuros Administration collection.”

On Sunday, parishioners and Santo Niño devotees flocked to the patio of the four-hectare church-and-school complex, where the Masses had been transferred.

Many of the devotees knelt and wept.

“Stop weeping,” said an obviously moved parish priest Fr. Sanny de Claro. “Let’s all rise . . . stronger and united. Let us not sulk in sadness and despair. We are with Jesus and He is here.”Later, Father De Claro revealed that the ciborium, where the communion Host was usually kept, had been saved from the fire. The Host was also secure.

“This is the biggest miracle,” he announced. “While looking for the image, the sacred host was found. We were pointed to Jesus.”

In his regular Sunday Mass at the Pontificio Collegio Filippino in Rome, former Manila Archbishop Cardinal Luis Antonio Tagle said he called up the Pandacan priests who told him there was “no time to save anything.”

“And then the painful question—how about the wooden image of the Christ Child?” He said he was sent the photo of the aftermath. “Totally burned except for the metal rays.” He said the priests kept “the remnants” of the image.

But Tagle added, “The Blessed Sacrament was saved.”

“In a crisis situation like this, you know that the Word of God has been planted in the minds and hearts of people,” he said.

“In a moment of panic, they knew it was not just a piece of metal, not just an accessory in the church, it’s Jesus, the real presence. And at the risk of their own lives they ran and saved it.”

Father De Claro said the church would be rebuilt.

“I don’t know how much of the existing structure is from the Spanish period,” said José. “I think it was burned during the Philippine-American war, just like Paco church.”

José said an inventory would have to be made.

“I think a full report on the fire will have to be made so other churches can learn from this misfortune,” he said.

He noted that while the Santo Niño de Cebu, which arrived with Ferdinand Magellan in 1521 and was rediscovered by Miguel de Legazpi in 1565, was from Europe, the Pandacan image was from Mexico. 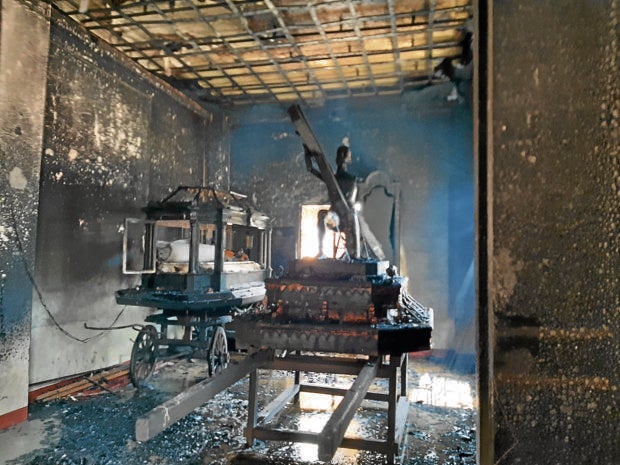 “In Pandacan, the Santo Niño represents another phase of our history: the galleon trade and our ties with the Americas, for the Santo Niño de Pandacan came from Mexico and is still another reminder of how far and wide our history ranges.

Joaquin said the Santo Niño de Pandacan was “associated with Montezuma, Cortes, the Manila galleon, the silk trade with China, and the Elizabethan poets and pirates.” INQ