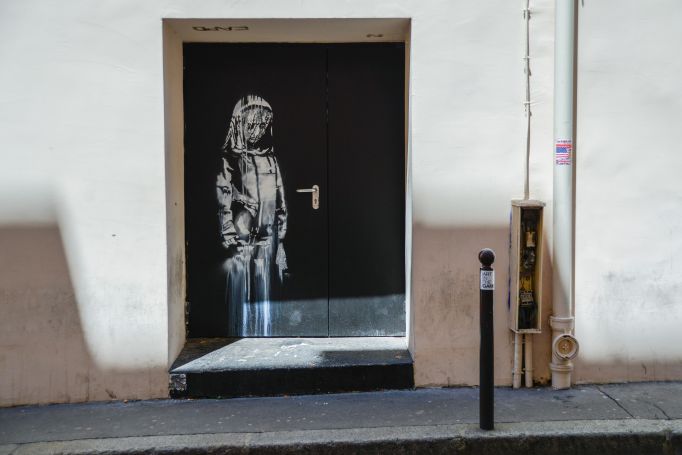 Mandatory Credit: Photo by Lucile Gourdon/Sipa/Shutterstock (9728226c) Graffiti on the door of the Parisian music club 'Bataclan' believed to be a work of street artist Banksy Graffiti attributed to Banksy, Paris, France - 26 Jun 2018 The work was cut out and removed from one of the emergency doors at the venue on 26th Jan 2019

An homage to the victims of the 2015 Paris attacks by street artist Banksy was returned to France on Tuesday after the stolen work was found in Italy.

The image of a young girl in mourning was painted with stencil and white paint on an emergency door of the Bataclan concert hall in Paris where Islamic State gunmen killed 90 people nearly five years ago.

It was found in the attic of an abandoned farmhouse in the eastern Italian region of Abruzzo last month.

The chief prosecutor of Aquila, the capital of Abruzzo, and the head of Italy’s police in charge of cultural heritage handed over the work to France’s ambassador Christian Masset at a Bastille Day ceremony.

The work will be exhibited at the French embassy and sent to France later Tuesday.

Works by Banksy, known for their distinctive style, irreverent humor, and thought-provoking themes, have been found on walls, buildings, and bridges from the West Bank to post-Hurricane Katrina New Orleans.

At the auction, works by the artist — who keeps his identity secret — have sold for more than $1 million.

Last month, six people were arrested in France over the theft. Two were charged with robbery in an organized gang and the other four with receiving stolen goods.

Works by Banksy, now one of the world’s most highly regarded contemporary artists, often shine a spotlight on social issues, such as migration or racism.

In recent weeks, he has posted on his Instagram account a drawing showing a lit candle setting fire to the American flag above a picture of a black man, in homage to George Floyd, the US man whose death in police custody ignited protests across the country.

He has also posted a drawing of people pulling down a statue, a reference to attacks on monuments or statues of historical figures linked to slavery or colonization.