Clams and chorizo: Perfect on a rainy night | Inquirer Lifestyle 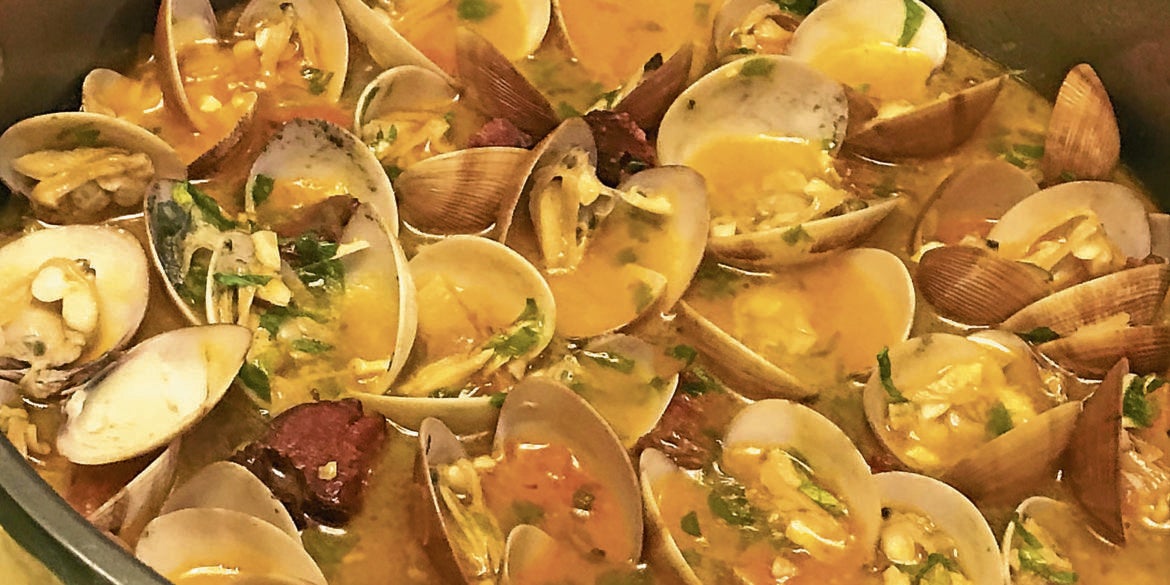 Clams and chorizo: Taste of land and sea

One of my favorite cooking show hosts is the Australian writer and cook Justine Schofield. Whenever she’s on the Asian Food Network, I’d watch the show, even if it’s only a replay.

Her shows include “Everyday Gourmet,” which features practical recipes elevated to a more sophisticated level, “Tropical Gourmet” and “Justine’s Flavors of Fuji.” With a mixture of charm and skill, she has just the right demeanor to draw viewers in, without detracting from the purpose of her shows: to inform the viewers about food, recipes and cooking.

In a show about her visit to Macau, Schofield demonstrated how to cook a dish of Chinese sausages and clams. It looked so heavenly. I could almost savor its aroma and flavor. Right there and then I told myself I would cook this dish.

However, I didn’t have Chinese sausages and with limited movement in this pandemic, there was no way I could go out to buy. So I thought of substituting Spanish chorizo for Chinese sausages.

It turns out there really is a dish of clams and chorizo. And thanks to the delivery service of my favorite fishmonger, a kilo of fresh clams arrived at my doorstep the following week. I was also able to pick up some chorizo from Terry’s store in Makati, which my daughter had ordered.

This dish is like the perfect marriage of land and sea. Like yin and yang, it combines the earthiness of the chorizo and the coolness of the clams. The clams are awakened in a broth seasoned with garlic, onions, tomatoes, parsley and the exquisite saffron.

The chorizo slices reveal the flavors they had kept to themselves during the curing process: paprika, garlic, perhaps some cumin, bay leaves and thyme. The white wine adds some spirit and the butter enriches the broth further. The result is a comforting dish that is both sumptuous and simple, rustic and lavish. It is the perfect dinner on a rainy evening.

The best accompaniment to this dish is crusty bread (maybe slices of toasted baguette), for sopping up the rich, flavorful broth.

Make sure all the clams are tightly shut. Remove the shells that are already open and discard.

In the same pan, sauté the onions, tomatoes and garlic in the chorizo oil for one to two minutes.

Pour the chicken broth in a microwave safe bowl and heat in the microwave for about 30 seconds to warm the broth. Stir the saffron into the warm broth.

Return the chorizo to the pan then pour in the chicken broth. Turn the heat to medium. Add the cleaned clams and cover the pan. Let simmer for about three minutes. Pour in the white wine. Simmer for another four to five minutes to let the alcohol in the wine evaporate.

When the clams have opened stir in the butter and sprinkle the parsley. Heat just until the butter melts. Remove any clam that did not open and discard. Serve the dish immediately with the crusty bread.

Do not season with salt, as the chorizo is already slightly salty. Or, taste the broth first after the clams have opened then season according to taste.

Make sure the clams are fresh. The shells should be tightly shut.