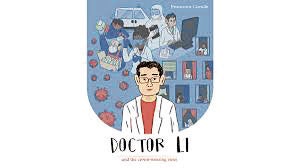 “Doctor Li and the Crown- Wearing Virus”: A symbol of the importance of scientists

Two new children’s books relevant to the times have been released and are downloadable in digital format, available to everyone. “Doctor Li and the Crown-Wearing Virus” by Francesca Cavallo, illustrated by Claudia Flandoli, graphic design by Samuele Motta, Filipino translation by Eugene Y. Evasco, Ph.D. (Undercats Inc., 2020), honors Li Wenliang, the ophthalmologist and whistleblower who worked at Wuhan General Hospital and was chastised for spreading the “rumor.”

The book narrates in very readable children’s language what has been major news stories in media—the doctor in Wuhan who wondered why so many of his patients appeared to have the same flu-like symptoms of cold and cough, how he immediately warned his colleagues, how the police knocked on his door to tell him to stop such messages, and who apologized when it was too late, for the good doctor had himself contracted the strange and unknown disease and died.

Li only had the best of intentions, and it was the scientist in him that was puzzled about the uniform illness plaguing his patients. His patients of all ages came to him for different reasons, for glasses to see far and others to see up close.

Yet, what was this strange ailment all seven of them had at the same time?

I like how the simple description of Li captures his person: “Dr. Li loved his job and took care of all his patients with joy.” That is high tribute for anyone. Rather than just honoring Li for his act of courage, his story places in proper perspective the importance of science in our lives. The colleagues of Li were discovering something new about the virus, each time. It wasn’t easy work for them “to know for certain because the virus couldn’t be questioned!”

Even if grown-ups cannot answer the children’s plaintive question, “How long will this last?,” the book ends on a hopeful note. No one can say because “it would take many doctors like Dr. Li, many teachers, many scientists and many researchers for people to once again hug each other and take the elevator together without having to worry about a thing.”

When this book came out in mid-April, I was impressed by its timeliness, and rued the fact that local publishing does not seem to move at that pace. I was so glad to be proven wrong because the next week, I received a message from award-winning children’s book author Eugene Evasco about his own book for the times, “Mahal na mga Frontliner,” illustrated by Jan Rex B. Casiroman (Vibal Group Inc., 2020).

This book is ideal for introducing the front-liners whom all of us under quarantine are heavily indebted to. It is a child’s thank-you to the medical workers who have asked us to stay home, and to all the other less visible heroes who continue to make our lives comfortable.

The child confesses to being bored and restless at home, but easily takes back his words, “Sana’y makauwi na kayo: / Nakahihiga sa sariling kama, / Nakapapanood ng pelikula, / At nakakasama ang pamilya. (“I hope you can go home, Lay in your own bed, Watch a movie and be with family.”)

The child’s point of view is manifested as he thinks of the nurses with seemingly extraordinary powers, with their hands dancing over an array of medicines for just the right ones for the ailing, portrayed with superhero-like capes. The medical technician does not lose his way in the maze of tubes of the ventilator, respirator, dextrose. In their protective gear for the unseen enemy, they are indeed superheroes. He even wishes he could donate his long hours of sleep to them who need these badly.

What I found particularly poignant were the lyrical lines, “Ikaw ang nakakita kay Lolo / Sa mga huli niyang oras. / Hindi man lamang namin siya nadalaw. / Hindi man lamang nakapagpaalam.” (“You saw Lolo in his last moments. We could not even visit nor say goodbye.”) It’s a thought that many readers, old and young can relate to with much pain in this season of deep losses.

The other workers being saluted are the farmers and their crops that keep us healthy. The reader in me just felt strange finding these pages between those devoted to the medical workers.

Could it not have gone right before that of the security guard? The guard is hailed because his new “weapon” is no longer a stick but a miraculous one that tells body temperatures. He is likened to the favorite teacher who keeps kids in line, calms them down and reminds them about keeping distance.

Bursting with gratitude, the child narrator looks forward to the day when he will personally meet the front-liners without their face masks to kiss and thank them.

What informative and timely books these are for today’s young audiences. Public feedback affirms that, too. Cavallo’s “Doctor Li” has been downloaded over 30,000 times and translated into over 20 languages (and even in Filipino, to my pleasant surprise), though Cavallo, author of the bestselling “Goodnight Stories for Rebel Girls” series, indicates that she uses Translated, a professional translation service. Other countries have indicated translation interest, too.

My initial concern about the quality of the Filipino translation was dispelled when I found out that Evasco volunteered to do the job, which Cavallo happily accepted. No one but Evasco could have done a better job. I am glad his name appears in the Filipino edition.

Cavallo writes a standard letter to all who download her books and invites the readers to send her comments via Twitter or Facebook, even including links one just has to press. The fact that Evasco decided to translate new coronavirus disease books into Filipino and even has an animated version of his story indicates book promotion engagements and efforts that authors need to undertake after their books are launched.

Evasco has every reason to be proud that his book is included in the New York City School Library System homepage among free e-books on the coronavirus. And he promises more such books to come.—CONTRIBUTED INQ

“Doctor Li and the Crown-Wearing Virus” by Francesca Cavallo is available at bit.ly/undercats.