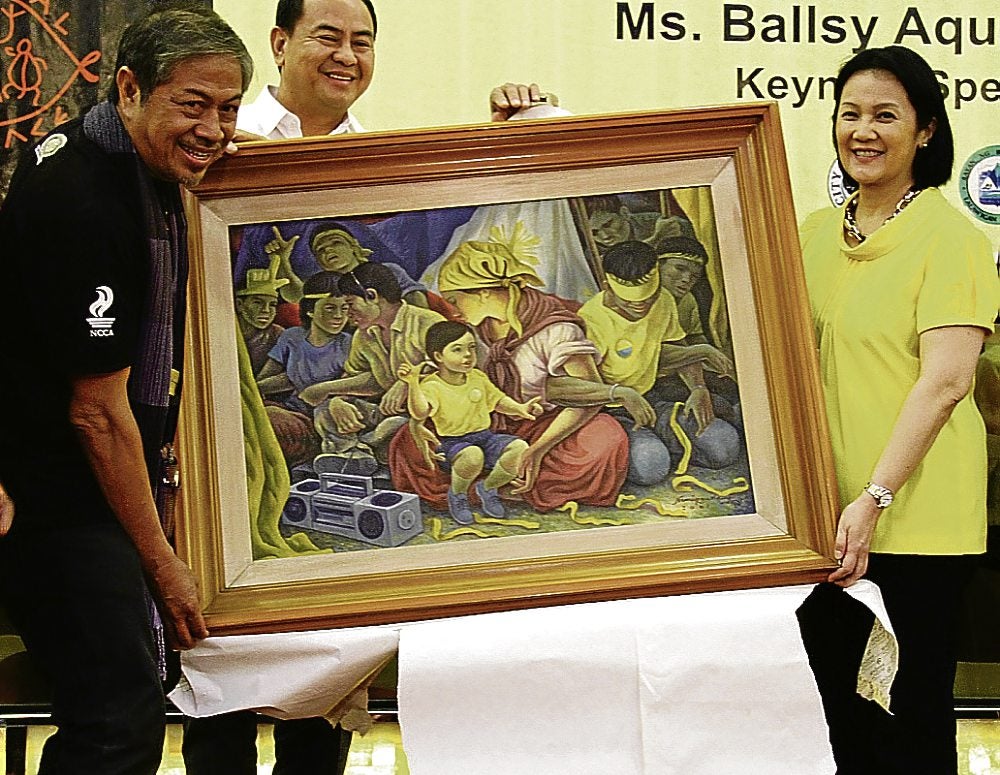 From petroglyphs to contemporary art, Rizal art fest an ‘experience’

Dubbed as the Rizal Experience, PVAF saw different artists from all over the country gathering in Rizal province to showcase their talent and knowledge in visual arts and to strengthen the connection among visuals artists in the Philippines.

PVAF too has an international dimension since the festival was attended by artists from China.

The festival is grounded on the theme of the National Arts Month, “Tradition and Innovation.” It was organized by  the National Commission on Culture and the Arts (NCCA).

An exhibition of different artworks by Filipino and Chinese delegates at SM City Taytay Event Center opened the festival on Feb. 17.

During the opening,  winners of the nationwide art contest competition were announced.

The first day of the festival also inaugurated the “One Angono” exhibit that features artworks from the town’s artists. The inauguration was followed by a cultural show by   the youth of Angono.

Meanwhile, those who would like to develop their skills on art had a chance to attend art workshops held at the Nemiranda Artcamp in Angono and at the SM City Taytay.

Human canvases were also present on the festival as tattoo artists joined the tattoo competition, “Folktaglyphs.”

An interaction mural painting was also prepared to strengthen the camaraderie and ties among the visual artists of the country and to create friendship with the delegates of China.

The UP Artists’ Circle Alumni took part in the celebration with the opening of its 40th anniversary exhibit, “In Circle” last Feb 18. The exhibit is showcased in Pinto Art Gallery in

Antipolo and will run until March 18.

The artists and delegates also visited Antipolo City’s Cloud 9, which has a gallery and exhibit of arts and crafts.

On Feb. 19, presidential sister Ballsy Aquino keynoted the conference component of the festival.

She also received  the painting by Nemiranda, head of the NCCA National Committee on the Visual Arts, titled “Human Cordon.” The gift is for President Aquino. It shows a scene of rallyists arm in arm, resisting the forces of the dictator Ferdinand Marcos, during the Edsa revolution of 1986.

The painting will be hung at the Ninoy and Cory Memorial Museum in Tarlac.

Other activities of the PVAF: TRE included nude art sketching session, on the spot landscape and nature painting, among others.

Art in the province of Rizal can be traced back 3,000 years ago through the petroglyphs found on its caves. The cave drawings were discovered by the late National Artist for the Visual Arts Carlos “Botong” Francisco.

Aside from Francisco, another Angono native was the late National Artist for Music Lucio D. San Pedro.

Nemiranda is also a native of Angono where he has an atelier and the Artcamp, which holds art workshops and hosts artists.

The NCCA event was in cooperation with the Rizal Provincial Government, Rotary International District-3800, and Thunderbird Resorts.

Other collaborators municipalities of Angono, Antipolo, Binangonan, Tanay and Taytay.

Mayor Gerardo Calderon of Angono said he is committed to making the lakeshore municipality truly a showcase of arts and crafts.