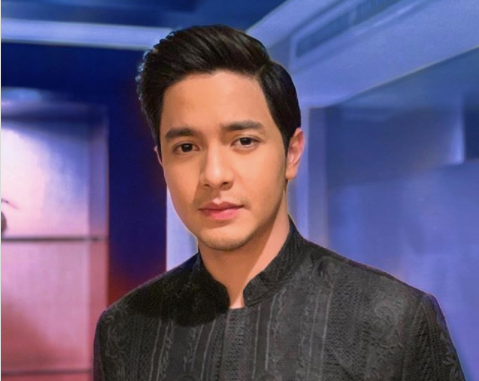 (If there’s anyone who can give me details about grandfather, please place it in the comment box. Thank you.)

(He is Lolo Renato, 74 years old. He sells vegetables at the Eton Exit of SLEX. Whenever I pass by Nuvali, I always see him on the side, armed with an umbrella which protects him from the sun and he’s selling vegetables.)

One morning, Platon decided to get out of his car to banter with Lolo Renato, just like “Atom Araullo” of “I-Witness”.

(He lives near a river, very near where he sells, he has a small house. He has two kids who are living in Manila and it has been years that they have not visited him. He lives alone together with his four dogs. Selling vegetables is what tides him over. He is just being asked to sell the vegetables.)

Lolo Renato’s income is very meager, since according to Platon, he only earns P100 from his sale of P1,000.

With that, Platon said there are many other questions he wanted to ask but opted not to out of pity for the old man. He then asked people to watch out for the documentary he will make about Lolo Renato.

(I think he was on the highway Eton Greenfield, going to Praman. He’s just in the highway. You will easily see him right away. One time, we also bought from him.)

One Maricon Cleofe claimed she was able to locate Lolo Renato.

(He’s there at the side of Eton going to Nuvali, idol. Me and my brother’s girlfriend were able to see him.)

(Actually, we do help him, every time we pass by, we stop just to give (him) money. We also give him groceries. He sells there everyday even when it is raining. He is just asked to sell the vegetables. He lives under that bridge in Eton. If you’re coming from the North, he’s just there at the main entrance of Eton. You will always see him at the right side, before reaching Phoenix Petroleum.)

(To those asking for his address, he just lives down there. You would notice there is a way going down. Lolo Renato doesn’t have an address to state, he always just says he lives down there.) JB