How Taal ‘bahay-na-bato’ is made to live into 2020 and beyond | Lifestyle.INQ ❮ ❯ 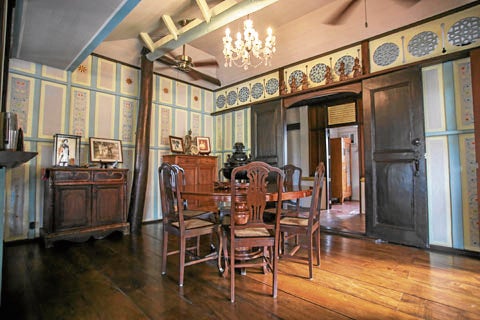 Small dining area connects to other parts of the house.

While heritage towns and cities are now being identified and designated for protection and preservation, historic overlay codes and regulations are still overruled by individual tastes and illusory approaches to restoration.

One recent small scale project took these codes to heart by sourcing the materials and necessary skills needed to restore a heritage house.

Saving a 180-year-old house, in a town like Taal in Batangas, takes more than money and a passion for history to promote its continuity of place; it needs great care to bring it back to the present and a keen receptiveness to respect its past.

Wedged between old and new builds in a side street a few steps away from the center of the town plaza, the bahay na bato was originally built in keeping with European standards of permanence. Basically, it had stone walls on the ground floor with free-standing tree trunks set inside the walls, which formed a grid supporting the upper floor and the high pitched-roof.

No doubt it had withstood the test of time, but it had slipped into dereliction and badly needed complete restoration and retrofitting. It was a house begging to be brought back to life.

The whole idea of restoring a heritage house belies a romantic spirit, but in reality, it is a daunting, expensive and stressful undertaking.

Michael Rodriguez, its new owner, remained unfazed even upon seeing that the house was infested with termites, with the wooden beams and supporting posts on their very last legs.

The ground floor, with its limestone and adobe walls typically used as the storage area, had held up, but the main balustraded staircase had to be moved entirely and reconstructed. The spacious upper floor, typical of the bahay na bato’s floor plan, hardly had any fixed partitions except for double doors to the bedrooms that could be opened wide to combine all areas on the floor into one single space. The living room is defined by space and light. Left unchanged, it was ringed with tall and wide windows that slid on grooved sills and had smaller windows below it called ventanillas, for air to enter and cool the entire house.

Rodriguez says, “Being very fond of history, I always wanted to buy a Spanish-era house where I could relive the far more genteel past of this country. This property came along in a very forlorn and dilapidated state, but the layout and features were very interesting. ”

In a nod to these times, the back half of the upper floor is an extension constructed to serve new needs. Here the airy retrofitted and rewired kitchen with all the modern conveniences plus eight bed- and bathrooms are adapted to a 21st-century lifestyle. With the historical character still intact, this extension of the structure is a contemporary layer that adds a new chapter to the history of the house.

It is primarily a home for its owners to enjoy when they drive out of the city, but it is also a bed-and-breakfast offering, a beautiful inn for others to experience in a town steeped in history.

The house attempts to evoke the Spanish colonial era in its architectural and stylistic details. That it comes with all the modern comforts contributes to a singular experience for both the history buff or time traveler.The upper floor overlooks a courtyard on one side and the service entry and garage on the other. Originally for horse-drawn carriages, this section of the house has been restored using the same materials (stone and adobe), and now modified for mixed-use space.

When the house was acquired, it had no ceiling, and the roof could have been a thatched nipa that may have been changed to corrugated iron in the 20th century. Now, a tongue and groove wood ceiling was put in place.

Rodriguez explains, “I had a design painted on the ceiling in the traditional way. I thought of a series of stylized Aspa de Borgoña (St. Andrew’s) crosses, because that evoked my favorite era in Spanish history— the Habsburg era, especially the Siglo de Oro. Unknown to many, the Aspa de Borgoña was the symbol and flag of colonial Philippines from the time of Felipe II, in the 16th century, all the way up to Carlos III, in the 18th.

“It was also the symbol of the Spanish military forces until the early 19th century. Apt, I thought, since both my wife and I come from military stock.

“The final design, with the red and gold of the Spanish flag at the borders, and rose roundels, were executed by Guy Custodio and his team. Guy is one of a handful of experts in the restoration of Hispanic colonial era artwork, especially murals and religious art. With Guy, it was a happy and mutually enlightening collaboration, because my ideas were very different yet well known to him, as many elements can be found throughout Spain. We also added local touches, such as the painted palm palaspas above the stairwell, and rural Filipino scenes.”

The reconstruction took roughly two years. Specialist skills were needed to maintain as well as retrofit the crumbling structure. Conservation-trained workers from Escuela Taller de Filipinas with specialized craft trades helped in reconstruction to make sure that the heritage building language was retained.

“Replacing the wooden parts was the most difficult task, since I needed to find the old hardwood species typical of area and era, like molave,” says Rodriguez. “We had to look for recycled wood from all over the region. About 70 percent of the wood had to be replaced. The adobe required some 40 percent new blocks, mostly sourced from Bulacan. Large capiz shells were also a challenge to find.

“Finally, looking for craftsmen was the most tricky aspect, since there really aren’t many left who know how to do these old houses and the many methods and intricate details involved. I realized there is a shrinking base of craftspeople, and the reconstruction affirmed my stance in supporting the rapidly dwindling number of craftsmen who can do these old buildings.

“There are agencies such as the Escuela Taller de Filipinas, based in Intramuros, that are actively teaching restoration crafts and skills, mainly to out-of-school youth. They must be encouraged and resourced. I hired some of Escuela Taller’s graduates to work with me on this project. They have made wondrous restoration work in places like San Agustin Church, Santa Ana and Malate Churches, Paco Cemetery, Jesuit House in Cebu, and many buildings in Bohol, Batanes and Pampanga.”He adds, “We have lost many of our heritage buildings over time, and more will go shortly. I am, therefore, in total support of restoration and preservation. I feel laws have to be tougher, and the owners themselves, who in some cases are the main cause of heritage disregard, must be legally bound to protect their built legacies. If they can’t afford it, there should be government support, or a mechanism whereby the property is sold to a relative or others committed to preserve it.”

Here and now, built heritage is a cultural asset that needs to be saved and represented with its historic character and architectural gentility intact so encounters different from our urban lives can be experienced.