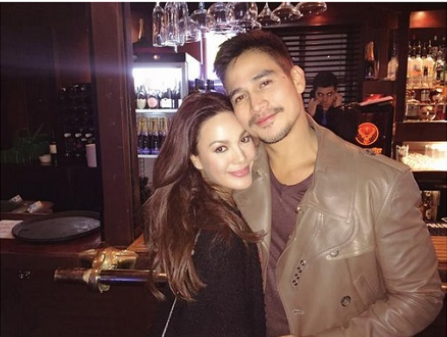 Fans of KC Concepcion and Piolo Pascual go giddy over a poem, wish for the ex-couple’s reconciliation

While enjoying her short staycation at The Farm at San Benito in Batangas, KC Concepcion shared with her fans and followers in Instagram a poem last Friday, July 24.

Fans joyously lapped it up, with a lot of them believing it was dedicated to Piolo Pascual, and that a reconciliation might be in the offing.

Pascual confirmed in October 2010 that he and Concepcion were in a relationship, this after Concepcion revealed that the actor had been courting her on and off for a couple of years. About a year later, Concepcion confirmed their break up.

Concepcion posted the verse under the hashtag “The KC Diaries.”

Most of those who commented felt it was Pascual whom Concepcion was addressing to, while those who were unsure still hoped for their reconciliation.

One @conconlebeco is hoping that the ex-couple would be back in each other’s loving arms, saying, “@itskcconcepcion sana matuloy na kayo Papa P para makita [mo na] ang hinahanap mo maging masaya ka na i love you KC.” (I hope you end up with Papa P so that you will find your happiness. I love you KC.)

Meanwhile, some were sure that after all these years, Concepcion is still in love with Pascual.

The exact reason for the couple’s break up was never made public. Meanwhile, in an interview in “The Buzz” with Boy Abunda in November 2011, Concepcion stated, “May mga bagay na parang hindi ko na kayang lunukin. Hindi ko na kayang tanggapin.” (There are things I can no longer swallow. I can’t take them anymore.) The two have since been in friendly terms over the years. JB

KC Concepcion to body-shaming basher: ‘I am my own fitspiration’