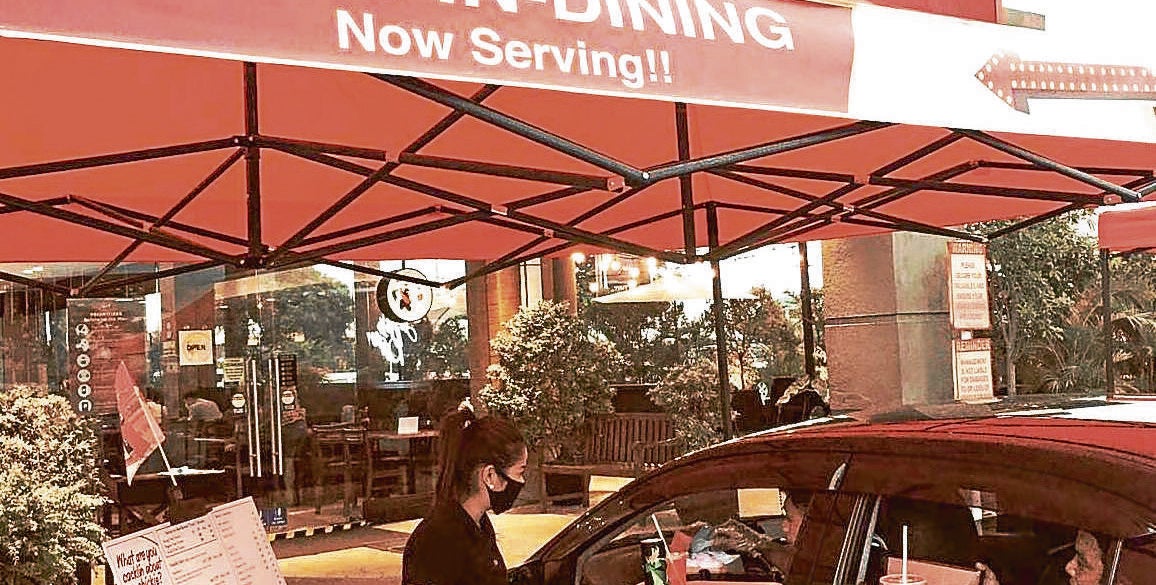 Drive-in dining is back—like in the ’60s

It brings to mind a scene from “American Graffiti”—minus the wait staff on roller skates.

The idea was a response to poor sales caused by the pandemic, says Ariel de Dios who runs the Max’s outlet in the gas station.

“The lockdown (in March) was a big blow as it was very sudden,” he told Lifestyle.

“Suddenly everything came crashing down. There was a lot of uncertainty on how we will deal with it. We were concerned about our employees’ welfare, and how long the pandemic will last.”

De Dios admitted that if he didn’t act fast, he stood to lose the business and the employees their jobs.

That was when he thought of the old films with drive-in diners.

De Dios said he thought of maximizing all available space allowed by law since, initially, only 30 percent of diners were allowed. “We could use our outdoor dining space for more diners, but it allowed only an additional eight diners with social distancing,” he said.

“With drive-in dining, there would be minimal contact since the diners can just eat in their cars,” he told Lifestyle. “I searched for equipment similar to car trays used in diners in the ’60s. They were expensive and needed to be imported.”

Server trays, he pointed out, “are made of rigid aluminum you hang on the car window. It has the same specifications as the classic Traco trays used in the US drive-in restaurants in the ’60s.”

But the concept would work only with ample parking space, and gas stations like Total on SLEX have wide spaces.

De Dios, a childhood schoolmate at St. James Academy in Malabon, invited us to try out the service.

Aside from the tray hooked on car doors, there’s another tray, with cushion, that diners put on their laps.

We had a half order of Spring Chicken, plus Fresh Lumpia, and a separate order of Kamote Fries.

We asked De Dios, “So, is patis (fish sauce) the secret ingredient that makes Max’s Fried Chicken stand out from the rest?”