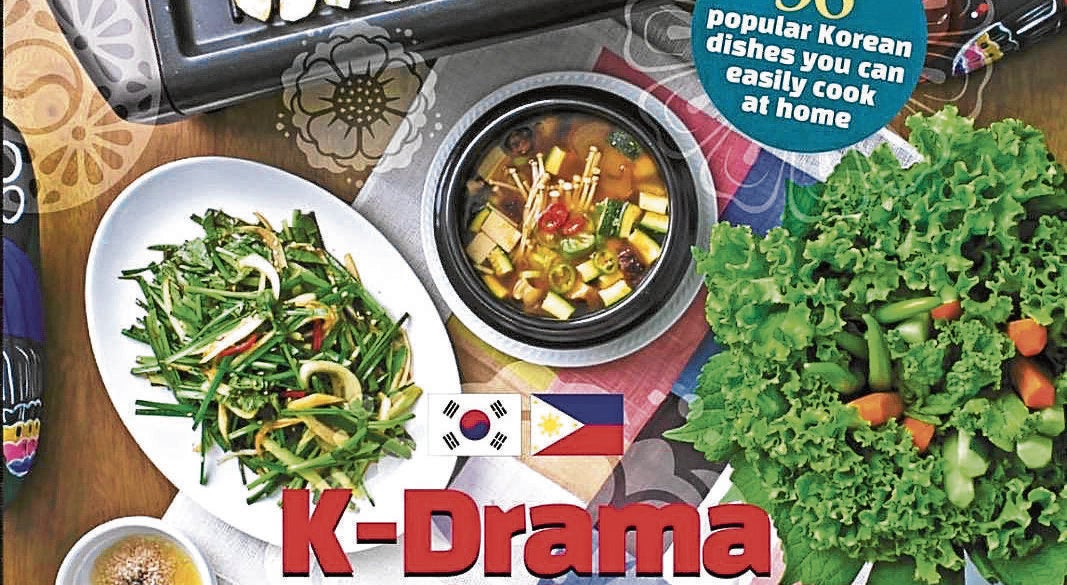 It’s a collaboration between the author and Korean chef Lily Min.

K-drama cookbook hot off the press

I fell in love with K-drama years ago. Over time, I developed a deep respect and appreciation of Korean culture, heritage, tradition and cuisine.

In 2018, I met Lee Jin-cheol of the Korean Cultural Center (KCC), during the Chuseok (Autumn’s Eve/Thanksgiving) celebration at KCC, and I found myself making songpyeon (half moon-shaped rice cakes) with chef Lily Min. Since then we’ve become friends, even “Seoul sisters.”

Early this year, I told Lily we should write a cookbook featuring the most popular dishes from notable K-dramas.

Here it is, a book of 36 traditional recipes prepared by Lily, to which I added my notes, tips and tricks for local flavor and playful twists.

The combination of our inputs makes this cookbook one of a kind. Our collaboration is a coming together of two cultures through food, a Filipino-Korean friendship cookbook.

Among the dishes is the much loved bulgogi, done Lily’s way or mine.

Bulgogi is a Korean dish that’s thousands of years old, believed to have originated from maekjeok, a skewered meat dish from Goguryeo times.

It has many variations, such as bulgogi ttukbaegi and bulgogi jeongol. Bulgogi is one of the most popular Korean dishes worldwide. To celebrate special occasions, Korean diners order this dish. Served hot, its meat and its juice sizzle on the plate. Adults eat the meat and drink soju (Korean distilled spirit), while the children mix their rice with the bulgogi’s sweet gravy.

Combine seasonings. Adjust taste. Mix beef and the rest of main ingredients with seasonings and marinate for one hour. Stir-fry over high heat.

Chef’s notes: When slicing onions, remove the root first so it is easy to separate the segments. For seasoning, you can use the white part of spring onions instead of the green. Pear is used to tenderize beef in Korea. You can use it instead of kiwi or pineapple. Just use more of it because kiwi and pineapple are stronger than pear. For every one tablespoon kiwi or pineapple, use double the pear juice instead.

My tweaks: I like using grated apples or pears on the beef in place of kiwi or pineapple. Substitute pork tenderloin or chicken fillet strips for beef. You may also use shrimp or squid, or a combination of both.

Add-ons: Add an assortment of sliced mushrooms like king, shiitake and shimeji. Saute mushrooms in vegetable oil with a pinch of salt, pepper and sugar, then serve over beef. Top mushrooms with green onions. An overload of slightly wilted green onions sliced into two-inch lengths add a nice touch, too.

½ Korean pear, sliced into matchstick-sized strips or you may also use an assortment of fruits like diced pineapples or kiwi, kimchi or chopped coriander sprigs for garnish

Make beef bulgogi according to Lily’s recipe. Mix to combine. Cook the beef and strain. Set meat aside.

To make the sauce, make one recipe of the bulgogi seasoning and add it to the strained drippings of the beef with 1-2 tablespoons of Korean apple vinegar (adjust to taste), 4 tbsp of maple syrup and sesame oil. This is your dressing. Season dressing to your taste with salt, pepper and sugar.

Arrange quinoa or adlai, fruits, kimchi, and beef decoratively in a bowl. Top with bulgogi and garnish with green onions and sesame seeds, sprouts or microgreens. Serve salad with dressing.

“The K-Drama Cookbook” is available in e-book and print formats. Get your ebook at Apple Books, Kobo and Barnes & Noble. Printed copies are available at select National Book Store.