Myths and facts about the Magellan-Elcano circumnavigation of the globe | Lifestyle.INQ ❮ ❯ 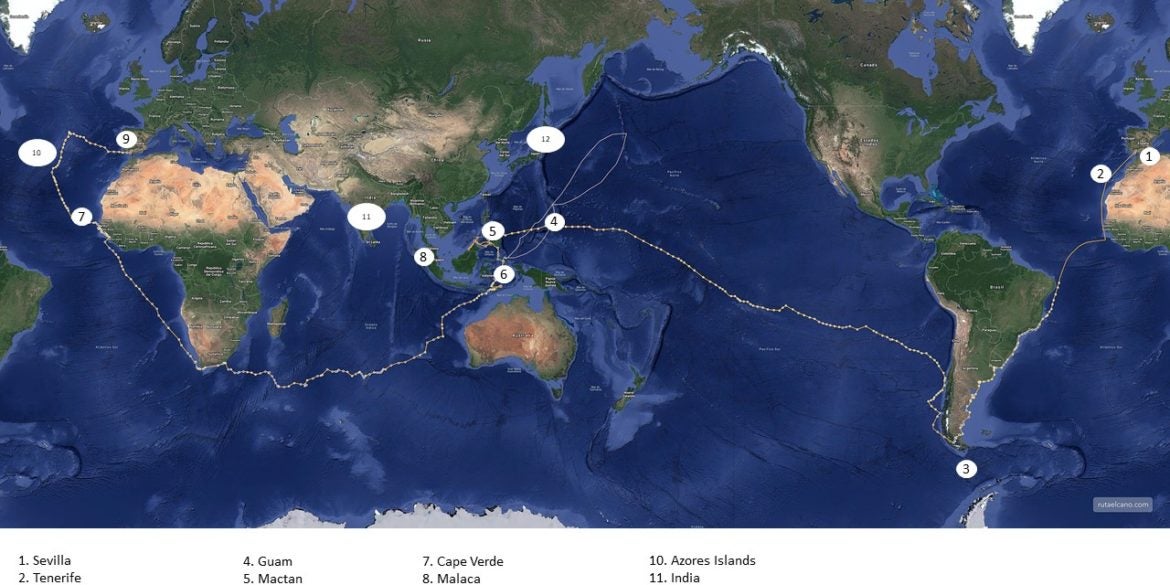 Myths and facts about the Magellan-Elcano circumnavigation of the globe

One of the greatest adventures undertaken by humanity was, without doubt, the voyage conceived by Ferdinand Magellan, which accidentally ended up being the first circumnavigation of the planet, achieved by Juan Sebastian Elcano. Much has been written about it—though not always with historical rigor—yet much remains to be discovered and written. In recent years, Spanish researchers such as Tomás Mazón, Braulio Vázquez or Sergio Afonso have been bringing to light issues of wide interest. There are not a few misunderstandings and absurd misinterpretations regarding historical facts of which not very much is known, and often wrongly known.

To start with, and against what many believe in, Magellan never intended to circumnavigate the world, nor has he done it. His objective was to arrive at the Moluccas Islands where extreme valuable spices were grown, such as cloves and nutmeg. He did not make the world tour. From the Iberian Peninsula, he traveled eastward with Portuguese fleets and arrived at Malacca. Traveling westward with the Spanish fleet he arrived at Cebu. The distance between Cebu and Malacca is 2,555 kilometers, which represents the missing distance needed to claim a real circumnavigation of the world. But even if he had reached his destination, the Moluccas, his objective was to return the same way he had come by; from the Moluccas to Malacca the distance is some 3,000 kilometers, which would represent the distance lacking to complete the circumnavigation of the world had he not died in Cebu and had he returned to Spain. This means that Magellan neither wished to circumnavigate the world nor did he actually do it.

Another common error is the belief that Magellan proposed to the king of Portugal, Manuel I, an expedition to the Moluccas traversing the Atlantic Ocean and later the Pacific Ocean, a proposal which, after having been rejected by the Portuguese king, he presented to the king of Spain, Charles I. So, a parallelism is traced to Christopher Columbus who actually proposed to the king of Portugal as well an expedition to reach India and Zipangu (Japan) by navigating westward. From a politically strategic point of view it would be logical for Manuel I to reject Magellan’s proposal if the latter had indeed presented it to the monarch. The Portuguese have already reached as far as Malacca which was a stone’s throw away from the Moluccas. Why would Portugal undertake an uncertain venture at a time when nobody knew that the Pacific and the Atlantic were connected? Moreover, they would be violating the Treaty of Tordesillas, defying papal authority.

To understand key points in this historical event, it is important to know what the Treaty of Tordesillas was all about. At the end of the 15th century, Portugal and Castille were the greatest European powers who have begun their transcontinental expansion. To avoid conflicts on sovereign ambitions on territories that were discovered or yet to be discovered, the Iberian monarchs turned to the arbitration of Pope Alexander VI who issued a papal bull dividing the world into two halves, drawing up an imaginary meridian line 370 leagues west of the Azores Islands (west of Portugal in the Atlantic Ocean). The evangelization of the lands situated on the west of this line was to be tasked to the Spanish crown, while those in the east was to be assumed by the Portuguese kingdom. The position of the dividing line to the other side of the world had to be determined; an issue which became very important when the kingdoms of Spain and Portugal disputed the control of Moluccas.

It was logical that Magellan thought that it would be quicker to arrive at the Moluccas through the Spanish side rather than through the Portuguese side, especially since he, together with his astronomer friend Rui Falero, thought that the Pacific Ocean was less vast than it actually is, that the radius of the terrestrial sphere was shorter. But the explanation that Magellan simply presented in his proposal to Charles I because he was first rejected by the Portuguese king, is an incomplete interpretation. There were other reasons for the conflict between Magellan and Manuel I, and for him to leave Lisbon disheartened to establish himself in Sevilla and propose to Carlos I his expedition to arrive at the Moluccas by sailing westward. It comes out at least strange the fact being that Elcano was the first one to really circumnavigate the world, his name is practically ignored by most of people in the world. —CONTRIBUTED INQ