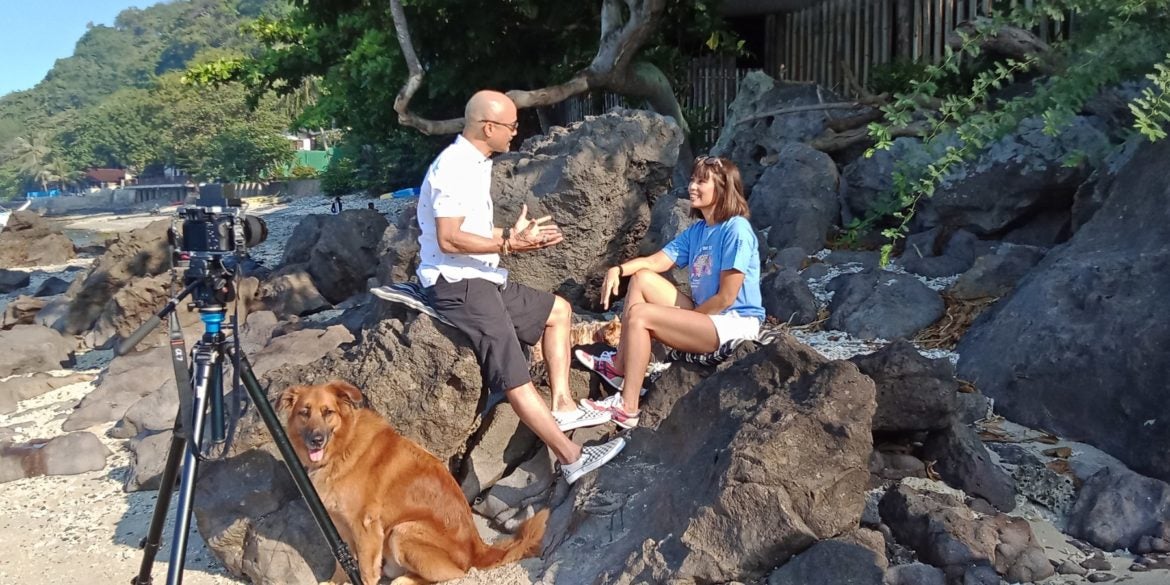 As chair of SEA Institute, Berta Lopez-Feliciano wants to educate people on the importance of marine environment—specifically, the critical Verde Island Passage

Like her six siblings, Roberta “Berta” Lopez-Feliciano was often quite helpless before the force of nature that was her older sister, the late Gina Lopez, head of ABS-CBN Foundation and supporter of many worthy causes—including the protection of marine environment.

That’s basically how Berta found herself chair of the SEA (Science Education Advocacy) Institute, what she calls “a collective effort of scientists and concerned citizens to protect the marine biodiversity of the Verde Island Passage (VIP).”

The SEA Institute was actually the result of a meeting between Gina and some scientists of the California Academy of Sciences (CAS) in San Francisco in 2010. “Gina asked Ting, my husband, and me to drive her to this meeting, promising to get us in for free,” Berta recounts in an email interview. “Gina asked us to first sit in on the meeting before exploring the CAS.”

In the meeting, Terry Gosliner and Meg Burke, marine scientists from the CAS, asked Gina to take on the job of protecting the Philippines’ VIP, which gained worldwide fame in 2004.

That was when marine biologist Kent Carpenter of Old Dominion University and ichthyologist Victor Springer of the Smithsonian Institution published a report that revealed an astounding concentration of fish life in the area, and they christened it “the center of the center of marine shorefish biodiversity in the world.”

Gosliner had long been diving in Anilao, Batangas, and the Philippines was a place close to his heart.

Gina was convinced, but was about to tell the scientists how busy she was. “Then at that moment, she swiveled and turned to Ting and me,” Berta recalls, “and she said, ‘You guys have a home in Anilao and scuba-dive! You should do this!’ And just like that, we were roped in without any science background or experience in NGO (nongovernmental organization) work, something that would stretch both Ting and me in areas we were completely unfamiliar with.”

Since then, Berta says, “I’ve learned to enjoy hanging out with scientists. It’s crazy how we have so much coastline and sea around us, yet the study of it is largely ignored, and the pursuit of a career in the marine sciences is never top of the list.”

VIP is a strait bordered by five provinces: Batangas, Marinduque, Occidental Mindoro, Oriental Mindoro and Romblon. It is a natural wonder where the fast movement of currents creates a rich, nutritious soup that sustains so much life.

“Marine biodiversity is important because it is one of the foundations of the world’s oceans and seas,” Berta says. “My understanding is, we need all the different species to be present to do their job, whether as a food source or as a medium for population control, to maintain a delicate balance.”

Her main mission at the SEA Institute, Berta says, is “to educate all, especially those who live alongside the VIP, regarding its importance, its ‘celebrity’ status, its effects.”

When she speaks to communities, as she has often done over the last 10 years, Berta’s goal is to create a sense of ownership. “I tell them that this is theirs, this is their pamana or wealth they can pass down to their children, but in order to do this, they need to safeguard it. I try to instill a sense of pride and stewardship.”

Berta’s younger brother Ernie, head of Creative Programs Inc. at ABS-CBN and cohost of a scuba-diving series on IWant TV called “Wreck Hunters,” recently interviewed his sister for an episode shot in Anilao, where he dove the wreck of a sunken hotel called the Dari-Laut.

“We’re trying to create citizen scientists, bring the science down to the layman’s point of view, and show them how the sea is important and what they can do with it,” Berta said during the interview.

Although human activities and pollution remain the biggest threat to the VIP, as they are for many marine ecosystems, Berta is more specific: “For me, the biggest threats are ignorance, just not knowing, and apathy, thinking it ‘doesn’t directly impact me.’ Changing these two mindsets might just be the tipping point.”

A love for the sea was one of the biggest passions shared with their kids by Berta’s parents, the late industrialist, Eugenio “Geny” Lopez Jr., and the former Conchita La’O.

“My earliest memories of family always involved the sea. Even when my dad was in jail, my mom continued to haul us to Batangas to spend weekends there. So, unlike most kids nowadays who are so divorced from nature and married to their devices, we lived in a different time, and were lucky enough to discover a love for the sea because of our parents.”

Berta’s husband, Ting Feliciano, is a businessman, whom Berta calls “our resident dog whisperer in the swimming pool,” as the family also has a brood of four dogs and three cats. Daughters Alisa and Dani are avid scuba divers like their parents; the family has done many liveaboard dive trips together.

A few years ago, Berta took up underwater photography, and after giving up tennis “because my knees told me to,” also got into freediving and long-distance swimming with old friend and underwater videographer Bobbit Suntay, president of the SEA Institute.

They were gearing up for 4-km swims last May in El Nido and in Lobo, Batangas; both events were canceled. Berta is also a yoga instructor and owner of Yoga Manila, which has been on hiatus during lockdown.

Because of new coronavirus disease (COVID-19), Berta says, “We miss the sea so much, it’s not funny. Anilao is our happy place. Just being by the sea is more than enough.”

Work in the institute has required some tweaking, as well, because of recent events. “Much of our efforts involve in-person interactions to promote alternative and sustainable sources of livelihood for communities, keeping track of reef health with a program developed by scientists and teaching this to community volunteers, and our plan for the future—doing marine camps with high schoolers who are at the precipice of deciding their lives’ trajectory.”

They have since shifted to weekly webinars, discussing the importance of corals and plastic pollution; one involved a lively discussion between a sea grass expert and a seaweed specialist. While the institute remains a program under Bantay Kalikasan, the goal is to eventually spin off into a separate NGO.

Like many environmentalists, Berta has been forced to confront fundamental realities in the face of COVID-19. “If there is one thing this pandemic has taught me, it’s that we are not insular beings, neither separate from each other nor from the environment we live in. I am hoping that we take a look at our priorities and figure out what is most important to us, and how to make sure it continues to exist in our lives.

“Instead of returning to a consumerist lifestyle, why not spend time discovering our country’s mountains and seas? If we don’t know it, how can we love it?” INQ