‘The Phantom of the Opera’ continues to be busy in S. Korea despite pandemic | Inquirer Lifestyle ❮ ❯ 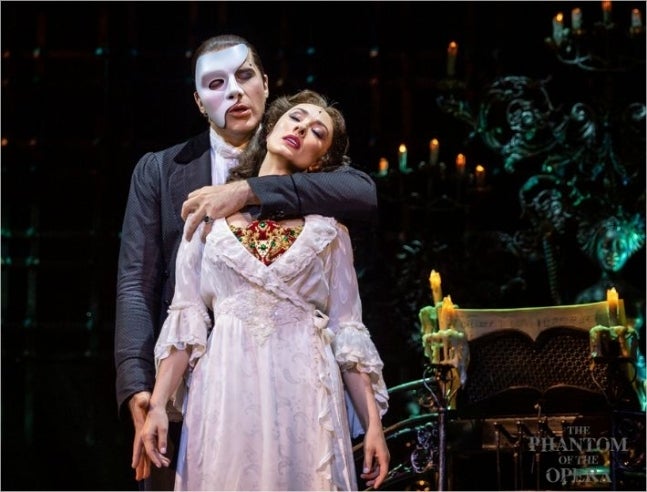 Rainer Fried, the associate director of the international tour production of musical “The Phantom of the Opera,” poses for photos before an interview with The Korea Herald on July 23 at Somerset Palace Seoul in Jongno, central Seoul. (Park Hyun-koo / The Korea Herald)

‘The Phantom of the Opera’ continues to be busy in S. Korea despite pandemic

SEOUL — While musical shows around the world have been put on an indefinite hold over the past few months, “The Phantom of the Opera” continues to be busy in Korea — the only production of the beloved show being performed anywhere in the world at the moment.

An international tour production of “The Phantom of the Opera” will wrap up its Seoul run at Blue Square Interpark Hall in Yongsan, central Seoul, on Saturday, moving on to the Daegu leg of the Korea tour.

“Sometimes, it is a little surreal to be here in Seoul with the company performing and knowing that we are on an almost different planet here,” Rainer Fried, associate director of the production, told The Korea Herald during an interview recently in central Seoul. “We are very proud but at the same time very humbled as well.”

“Theaters have been shut down for months, all of our friends and colleagues are out of work. Everybody is desperately scrambling to understand and plan some sort of reopening at some point, which is so difficult because no one knowns how this virus will behave and what will come of it,” German-born and Australia-based Fried said, regarding the ongoing COVID-19 pandemic.

It is Fried’s fourth time directing a production of “Phantom” in Korea, with one licensed and three international tour productions here. He insisted that despite the virus pandemic, not much has changed — except the masks and body temperature checks.

“We try to be cautious, socially distancing as much as possible. It is not always possible, when you put makeup, wig or costume on a person,” he said. “There is great trust in the company that everyone is doing the right thing. I call it the circle of trust.

“Onstage, the show is the show. The show must go on,” Fried said.

The Korean tour of the show kicked off in Busan in December and wrapped up in February, followed by the Seoul run of the show starting in March, shortly before the world was hit by the virus pandemic.

In April, two ensemble cast members of the show were confirmed with the virus infection, leading to the self-quarantine of the entire 128-member crew. The show was suspended for three weeks. According to Fried, when the crew came out of quarantine there was a huge sigh of relief.

“We know it was controversial at times that we were still performing,” he said. “We have proven that the guidelines and the process we have in place have been working. We hope to have the trust of Korean people and the audience numbers have been going up over the past few weeks again.”

Backed by the encouragement, the show will move on to Daegu with performances slated to run from Aug. 19 to Sept. 27 at Keimyung Art Center, before the show moves on to Taiwan later in the year.

“Back in April, when we were talking about Daegu, it was like ‘Never!’ But now, it is amazing they really have their numbers under control in Daegu. Isn’t it great that they have managed to curb this crisis?”