After Covid-19, Salvosa paints the front-liner in his mother and child | Inquirer Lifestyle ❮ ❯ 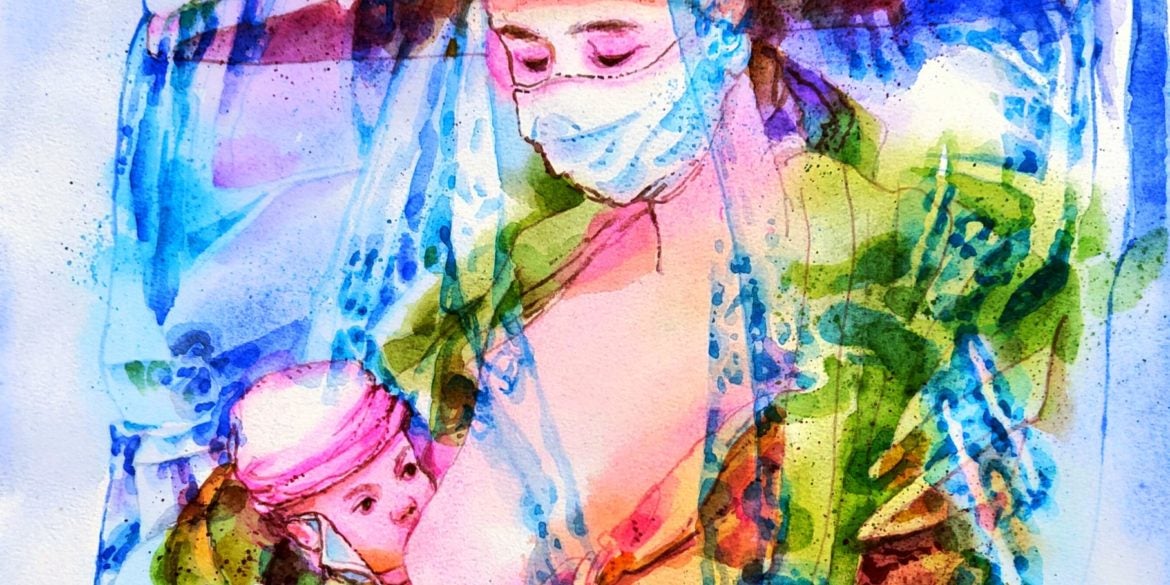 After Covid-19, Salvosa paints the front-liner in his mother and child

It was while he was slowly recovering from a grueling, monthlong medical ordeal he was convinced was the new coronavirus disease (COVID-19) that visual artist Jonahmar Salvosa began to see the images in his mind’s eye.

They usually took the form of the archetypal figure of a mother and child, that deepest, most human connection of all.

A graduate of the University of the Philippines College of Fine Arts in the 1970s, Salvosa started out as an abstractionist before returning to figurative art as his mature style.

The mother with child is a recurring theme in his art. He had painted such images many times in his decadeslong career as a figurative artist, showing them often in the act of breastfeeding. But never like this.

In the aftermath of his illness, in the isolation of self-quarantine in his studio, he started painting them, working quickly in watercolor.

The images were of front-liners—the new heroes in the age of the virus. Salvosa depicted them not in the hospital wards and intensive care units where they did daily battle with the virus, but afterward at home with their children, still separated by a barrier of personal protective equipment, masked and shielded, his vision of the “new normal” we all have to live in and the price health workers must pay to serve.

Since his youth in Naga City, Salvosa had been prone to what he calls “flashbacks,” imagery projected on his mental screen, usually in vivid color. Were these waking dreams? Projections from his subconscious mind? Shards from the Akashic records?

They usually came in the half-conscious state between sleep and wakefulness, these dreamlike images of angels, fairies and other mysterious figures, fading as he fully awoke.

At one point, he attempted to capture them by keeping a tape recorder by his bedside, and dictating notes before the images dissolved.

Although these images frequently figured in his work, Salvosa had always been a bit ambivalent about them.

A longtime student of Zen meditation, he had been warned against such flashes of imagery by his teachers. In Zen, these transient mental phenomena called “makyo” often arose as meditation practice deepened, and were considered hindrances to achieving true mindfulness.

“I tried not to entertain them,” says Salvosa, speaking in Tagalog. “But 10 years ago, a friend told me, ‘Hulog ng langit ’yan, dapat saluhin mo, kung hindi may ibang sasalo.’”

Salvosa began to think there might be something to this theory when he saw the work of an Indonesian artist that strongly resembled imagery he had seen in his mind.

In any case, he had ample time to work this out when got sick in February.

Rather than seek conventional treatment in a hospital, Salvosa decided to self-quarantine in his studio as soon as he started to feel ill. He exhibited all the known COVID-19 symptoms—loss of sense of smell and taste, a persistent cough, shortness of breath, intermittent fever, a severe headache, a bone-deep pain in his spine and joints. (Since he never got tested, however, this remains unconfirmed.)

Most likely, he says, he caught it from a friend who had returned from travel in Asia, and who had also fallen ill.

A longtime student of alternative healing, Salvosa decided he would heal himself, eating a largely vegetarian diet of fruits and vegetables, taking natural herbal remedies and performing acupuncture on himself.

“I concentrated on the acupuncture points that would boost my immune system,” says the artist, who learned the basics of the art many years ago.

At night, he connected with the healing energy of nature by embracing an avocado tree that grew in his garden.

“I would embrace the tree every night for 15 to 20 minutes, and ask God to give me the energy to overcome the illness,” he says.

For good measure, Salvosa also turned to prayer. On one of his trips to his Naga City hometown, he found some old novenas in the Bicol language. Having grown up in Naga hearing about herbolarios and anting-anting, the artist feels a deep affinity with the esoteric spirituality that blends folk Christianity and older animistic beliefs in elemental spirits and forces.

He tested the magical healing power of prayer when he came down with a severe case of dengue years ago, and came back from the brink after reciting these novenas.

They served him again in good stead as he slowly recovered in March. By April he was back to painting.

His own healing journey inspired other works with evocative titles like “Oracion contra Covid” and the self-portrait “Ninonong Sandata Contra Covido.”

Salvosa says he used everything he has learned since he was a child—traditional medicine, Zen, acupuncture, qigong and aikido, esoteric folk Christianity, prayer and art—to battle the virus.

Now recovered, he still recites a psalm or bible verse before painting, he says, to dispel any negative energy.