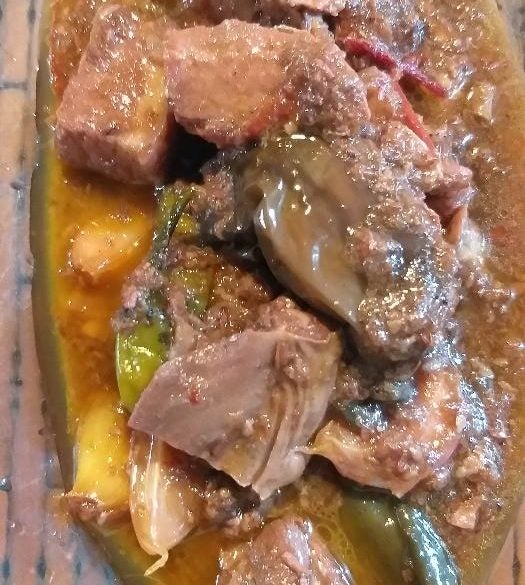 Begucan ‘babi,’ duck confit and a feast of quarantine takeout food, from QC to Pampanga

Because of the quarantine, the household has had to order out to add variety to the menu and to keep the cooks (maid and me) sane. We take out from nearby restaurants on West Avenue, Quezon City.

Baliwag, a grill place, has one of the best liempo (pork belly), but it is also known for chicken barbecue. We still have to try its pork face, boiled, dried, then deep-fried.

Shantung, an old Chinese restaurant that started in Quiapo, Manila, is known for hot and sour soup and fried chicken. We prefer its hot and sour soup to that of King Bee at Fisher Mall, but the latter has good broccoli with shrimps.

A favorite is Bacolod Chicken Parilla on Scout Gandia. Its chicken parts (paa, pecho, pakpak) have that inasal flavor with a hint of sourness. My favorite is the laswa, the soupy vegetable dish flavored with kalkag (dried krill), but they haven’t done this dish lately.

Friends have surprised me with specialties from other places.

Tina Concepcion Diaz of Taza Platito Desserts sent two minicakes, one with dates and nuts, and a especially wonderful orange cake with walnuts. These banished the blah of quarantine days.

Clara Lapus of Mama Sita sent one lunch package from Casa Reyes Bistro Filipino Restaurant in Greenhills of her niece, Christine Bautista. Filipino Family Feast consisted of crispy pata, kare-kare, pork barbecue, pancit Canton and Java rice. The Java rice alone already connects this restaurant to the Aristocrat Reyes family. All the flavors remind one of the mother restaurant, especially the barbecue. It was, indeed, a feast.

A few days after reading in Lifestyle about a group called Culinarya Pampanga that doesn’t only work to preserve the cuisine of Pampanga, but also cooks and delivers the province’s specialties, one of the five chef members, Sau Del Rosario, delivered several dishes to sample.

There was Bistig Baka, the Pampango version of bistek (beef steak), quite true to the expected flavor of soy sauce and calamansi, though I must commend the kitchen for the tenderness of the beef.

The Sisig Paella was so good that it was the first to be consumed, with my son who cooks sisig nodding his head in appreciation.

The Begucan Babi, again, the province’s version of Binagoongang Baboy, had cubes of pork absorbing the fermented shrimp.

There was duck with its huge legs—duck confit, the note said. The migratory ducks called dumara land in the only mountain in Pampanga, Mt. Arayat. When in season, these are caught and cooked the way it was sent to me—stewed.

The duck may not be dumara since there are duck farms in Pampanga, but the bird was tender and the sauce very tasty. What was good about the dish were the ampalaya slices that tasted pickled but still had that bitter flavor.

I wondered if my family noticed like I did that Pampanga cooking is rich taste, hardly any subtlety. The aftermath is a heady feeling that needs a bigger dose of flavor-absorbing rice.

It confirms my first observation of Pampango flavors I wrote in my book, “Country Cooking,” where the Pampango cook would not hesitate to use pork lard in the begucan babi, the morcon must have more slices of chorizo Bilbao than is considered healthy and kilos of sugar are used to make tocino the way Pampangos prefer it.