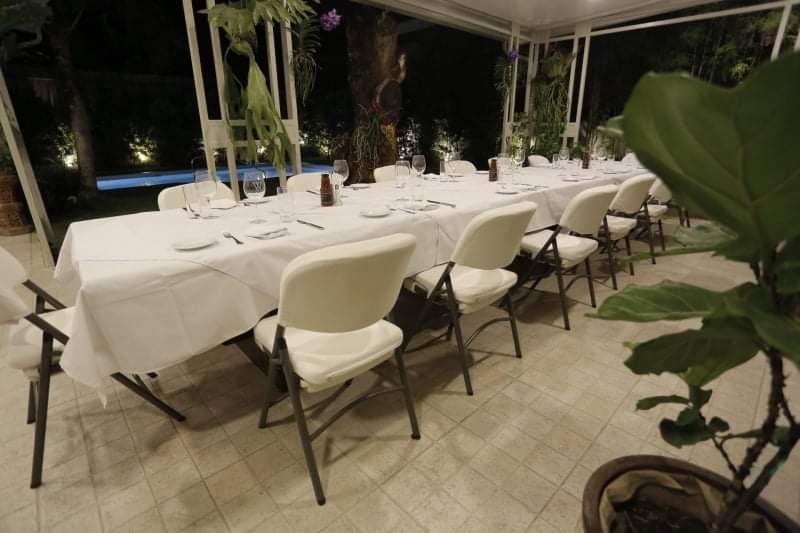 The Wolfgang Steakhouse teamcan set up the dining area using the owner’s tables and chairs, but they can provide tablecloths, plates and cutlery.

Restaurants, like other businesses, struggled to reopen in June when ECQ (enhanced community quarantine) was lifted. But to reopen they had to install safety measures and strict protocols set by the Department of Trade and Industry and the Inter-Agency Task Force.

After dealing with what one chef likened to birthing pains, they have another lockdown to contend with. On the eve of the two-week MECQ (modified ECQ) which started this week, restaurateur Raymund Magdaluyo announced a new pivot on Facebook.

The president of Red Crab group and partner at Wolfgang Steakhouse (Resorts World Manila, Bonifacio Global City and The Podium) said they would offer no-contact catering.

“Wolfgang’s Steakhouse can cook steaks right outside your home or in your driveway. No need to go to our store. Just order from the menu. We cook and leave the goodies along with the plates and knives with you,” Magdaluyo wrote.

The restaurateur is one of the more vocal in the industry and was one of the proponents of RestoPH, a group formed during the pandemic whose aim is to help other restaurant owners affected by the lockdown.

“Early last year, we had the Wolfgang mobile kitchen made. We were able to cater at pop-up events in Clark and Vigan,” he told Lifestyle in an email interview. “When the pandemic hit, one of my former students in Shanghai told me about this high-end Indian restaurant that delivered food complete with plates and cutlery.”

Since the truck was already there, Magdaluyo thought it would be a good idea to do something similar. “We could bring the mobile kitchen to guests, leave the food, and just come back to clean up when they’re done. It would be catering with no—or at least very minimal external—contact.”

Those who want to avail themselves of this service can contact the restaurant and choose from its “all-day menu,” which is a standard steakhouse menu. Options include porterhouse steaks for two, three or four people, New York striploin, rib eye, fillet or T-bone. On occasion they offer tomahawk cuts. The steaks are flown in fresh weekly, dry aged, and double-broiled upon order.

“The best part about this is that they can enjoy the wines they have at home while feasting on the prime US Angus meats,” Magdaluyo said.

The no-contact catering concept is a fairly new and largely unexplored option. That Magdaluyo was able to offer it immediately is notable. Still, he had to clear it with his American partners.

“Our US colleagues run the stores with us and anything that has to do with operations has to be cleared with them. However, these past months, they knew the Philippine team needed to be on survival mode, especially since health regulatory conditions between countries differ. The honest truth is we are blessed to have a great team comprised of industry veterans and young practitioners,” he said. “Peter Zwiener, global head of Wolfgang’s Steakhouse, loves what we have done with Wolfgang’s Steakhouse mobile. They plan to replicate it for the Japan team.”

Magdaluyo hopes that the concept will click with their patrons. “We are doing this for our regular customers who do not feel like dining out or are not allowed to dine out. The best time to have ‘no-contact catering’ is when someone in the household is celebrating something special,” he said.