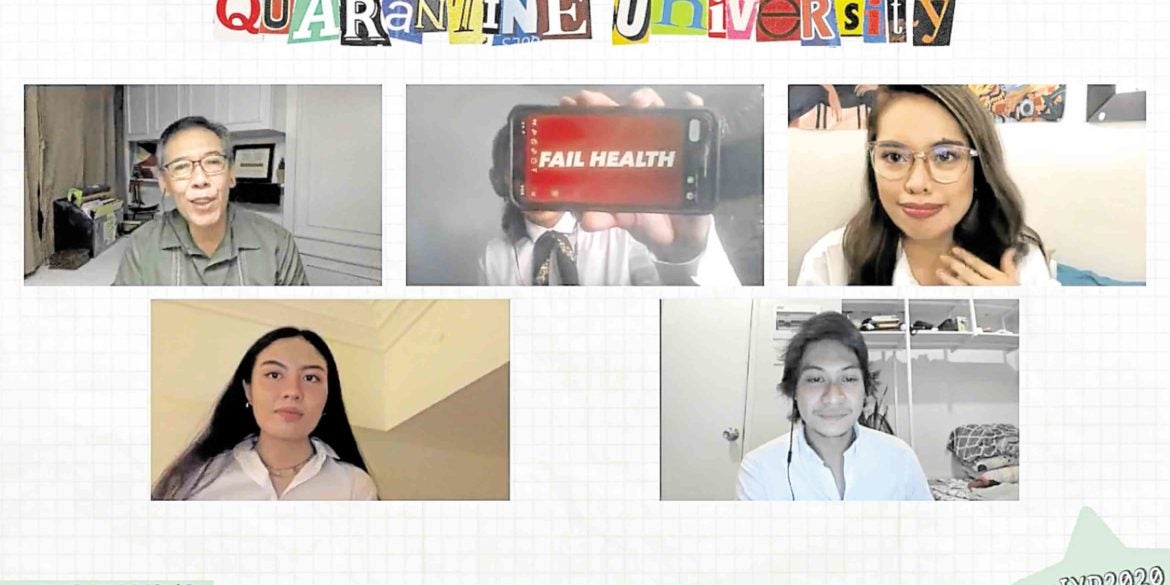 And your classmates at this unique university? Kakie Pangilinan, Macoy Dubs, Dora Lulab Dorado and Hershey Neri—content creators and social media personalities who have been using their platforms to speak up about important issues from mass testing (or the lack of it in this country) and victim blaming to the antiterror law and bad governance.

“I really stan these people so much,” another wrote.

The class started like any other—with attendance. “When I call your name, turn on your camera and say ‘present,’” Diokno said. Then he kicked off the graded recitation, asking his students what their quarantine goals are.

Hershey would have answered, except her internet connection was bad, so bad that a viewer posted, “Pray for Miss Hershey’s internet.”

There were plenty of light moments (at one point, Hershey even fell off her bed), but Quarantine University’s first class got serious, too. They discussed what it means to be woke, cancel culture, dealing with trolls, the Better Normal Bill and the 2022 elections.

Here are some things we learned from Quarantine University.

Kakie on coping with negative comments: “I don’t know if I have coped, to be honest po, but I try. I think that the best way that I found to cope is to just keep going on, block lang, block the haters and keep making awra and eat lots of Chicken McDo, I think that’s very important.”

Kakie on her advice for young Filipino women: “What I would say right now is be brave, be strong and don’t ever ever let anybody talk down to you.”

Diokno on dealing with trolls and bashers: “Hindi ko sila pinapansin and I never let it get to me. Actually hindi ko binabasa ‘yung comments nila. Minsan pag nakikita ko, tingin ko naman when you say things like that, you are demeaning yourself, you are not demeaning the person you want to demean. Sa akin eh these don’t matter, basta’t keep your eye on what you want to say and get your message across. To me that’s the most important thing about going online.”

Dora on cancel culture: “What’s happening with cancel culture is it’s becoming an end-all, be-all guillotine for internet personalities. There are a couple of ways we can go about it … kasi theoretically it would be a nice accountability weapon, but what’s happening is if someone makes a mistake, an honest mistake, people rush to cancel and end the ‘career’ of the person.”

Kakie also on cancel culture: “Holding each other accountable is super different from harassing one another online … Minsan nagiging moral superiority na. People love to gang up on someone in order to make themselves feel good … it’s not about you being right, it’s about the person growing. It’s about holding each other accountable, it’s not just attacking somebody. Of course that doesn’t include bigger mistakes, like obviously, cancel mga kurakot, we should definitely cancel them and remove all of their influence, I think that’s very important.”

Diokno on the wisdom of young people: “You’re never too young to know the truth and what’s right. Wisdom is never a monopoly of boomers like me. The wisdom that you have and you’re sharing, sa akin universal yan.”

Everyone on staying mentally healthy during the pandemic:

Hershey: “It’s normal to feel anxious and sad. Our goal this year should be all about surviving. It’s okay if the only thing you achieve this year is to survive.”

Dora: “Filter who you follow and make sure you’re feeding yourself with people who are giving you positive energy on social media.”

Hershey on nation-building: “Malaki ang part natin sa nation-building. Hindi porke’t bata tayo ibig sabihin wala tayong matutulong. As clichéd as it sounds, ‘di ba, tayo nga ang pag-asa ng bayan? I want to use the word influencer … tayong lahat, influencer tayo. Lahat tayo may platform, lahat tayo may boses. Whether you have 100 followers, 1,000 followers, or even less than that … Let’s use our platforms for good and for the truth. Let’s be the voice for the voiceless.”

Dora on the power of voting: “We forget that voting is our most direct form to affect governance. Yung mga 16 to 17 dyan, register na because by the time 2022 comes, legal voters na kayo. We have the power to turn the tide and elect people who share the same values as us and represent our ideals. I’m really not losing hope that in 2022 we can really change the Philippines. We can change the world, honestly, guys, we can change the world. Please never lose hope.”

Kakie also on the elections: “In 2019, there were 10 million youth voters who were eligible to vote who weren’t registered … I think people really tend to underestimate the value of a single voter … Don’t you want to get indelible ink in your nails and have a direct hand in the way policies change in our country? I want the youth to feel empowered. I know that in these times we can feel so helpless and we can feel so lost, but I want to encourage you guys that unrest can only mean that change is coming, rising tensions onlly mean a climax. And that climax is inevitable. And that means that things will change. And it’s up to us to make sure that that change happens.”

When class ended, we felt a little more hopeful about the future and that was refreshing. Diokno said, “Don’t worry, we will have more class sessions after today. Ito pa lang ang simula ng ating Quarantine University.”

“The only 7 a.m. class I’m willing to attend,” a viewer commented.

You can watch Quarantine University on Chel Diokno’s Facebook page.