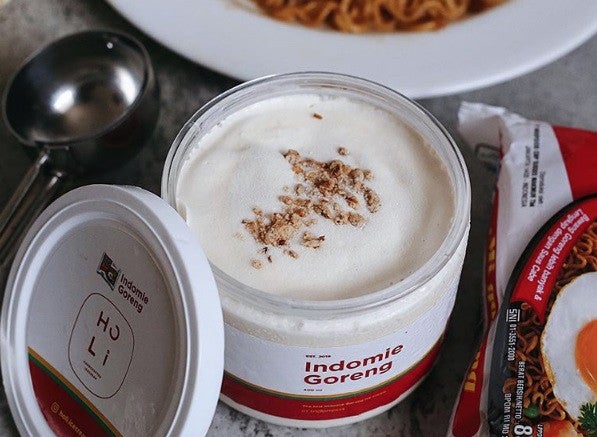 If the year 2020 wasn't strange enough for you, how about some Indomie ice cream, complete with fried onions? www.instagram.com/holi.icecream via The Jakarta Post/Asia News Network

JAKARTA — Fans of Indomie Goreng are used to eating the beloved brand of instant noodle for breakfast, lunch or dinner, but how about for dessert? Indeed, a newly introduced version of the food has been turned into ice cream by online seller Holi Ice Cream.

Speaking to kompas.com, co-owners Evelyn Djoenaedi and Stephen Ganda said their love for the instant noodle inspired them to create the unusual ice cream flavor.

“Usually when tired after work, we enjoy cooking Indomie noodles. We’re also the kind of people who need dessert after a meal, hence we always eat our own [homemade] ice cream. Given this, we then thought about how fun it would be to create an Indomie Goreng ice cream flavor,” Evelyn said on Wednesday.

After spending time brainstorming and experimenting, they came up with what may very well be the perfect recipe for the ice cream, which they then offered to family members to taste test without telling them what the flavor was.

“Surprisingly, they said it was very delicious and they were surprised to find out it was an Indomie Goreng flavor. Rather than enjoy it ourselves, we then decided to sell it to the public for them to taste as well.”

Since launching the unique ice cream on Aug. 10, Evelyn said many were curious and gave positive responses, such as one Instagrammer named Felicia who described the product as “not too sweet” and “still felt like an ice cream with a hint of Indomie Goreng”.

However, Evelyn noted there were some who found the flavor rather unusual, perhaps since it comes with real fried onions sprinkled on top.

Fried instant noodles are so popular that many businesses have tried incorporating the food into unique dishes, oftentimes with much success. From donuts and burgers to onigiri and birthday cakes, if it’s edible, chances are someone has tried to add Indomie to it. Some have even been inspired to create non-food products, such as Indomie sneakers and scented candles.