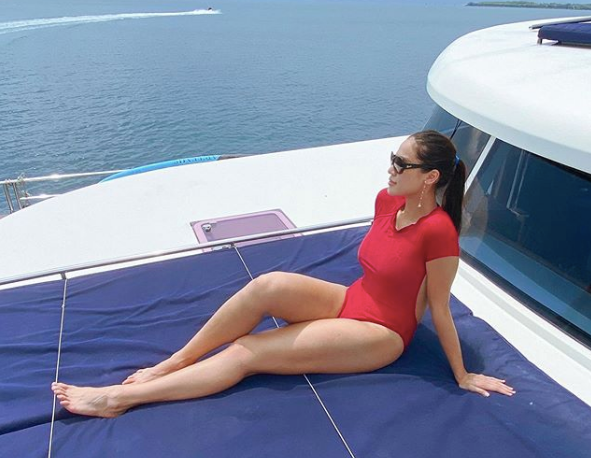 Professional volleyball player-turned-beauty queen Michele Gumabao acknowledges her physical flaws but she is far from disappointed about her bodily imperfections despite bashers highlighting these.

Gumabao hit back at her body-shaming critics via her Aug. 13 Instagram post, showing her clad in a red one-piece swimsuit while on board a yacht.

“Transitioning from being a professional volleyball player to beauty pageants, I was and still am being criticized for being too big or too muscular. My legs are too big they say, honestly they really are,” she said.

“Instead of being insecure about it, which is a constant battle of choice, I just remind myself that these legs got me through years of intense volleyball, allowed me to jump, play and win,” the beauty queen noted.

Veteran actor Dennis Roldan’s daughter is also not into comparing herself with others because she thinks this is not healthy. She also feels her bashers would never understand that her muscles are “made for champions.”

Her understanding fans and followers lauded her for being positive despite the bashings.

One @iamjoms09 believes that Gumabao’s legs are just fine because he personally prefers “thick legs to grab and wrap around.”

“Strong is beautiful! Be proud of your [bulk] Always,” one @candy.mdmba said.

“Breaking the Norm Michele!” one @jcsjevents said. “We celebrate God’s uniqueness in all of us!” JB