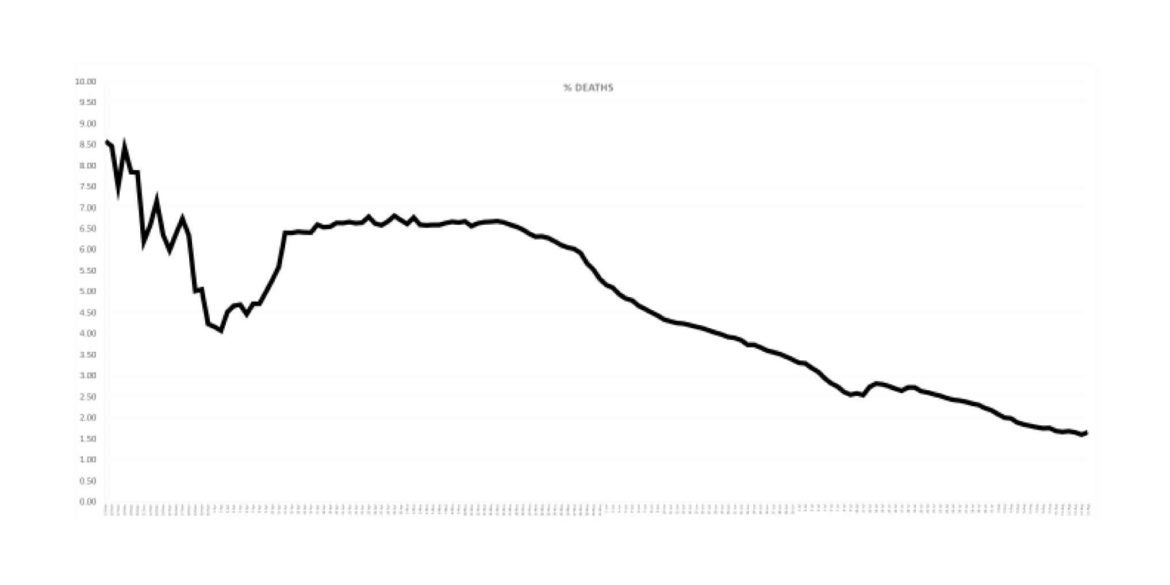 Graph of declining COVID-19 deaths, with data from the DOH

The death rate, with some swings up and down, has been clearly declining. We have overreliance on inaccurate tests

The high infection numbers reported by the Department of Health (DOH), while instructive, are misleading. It is resulting in all kinds of misplaced, repressive and destructive policies. Farr’s Law, a fundamental law in the science of epidemics, advises us that the real indicator to monitor is the death rate.

The death rate of the Philippines, with some swings up and down, has been clearly declining for five months. It has moved from a peak of 8.57 percent on March 15, down to 1.65 percent on Aug. 15. (See graph, which is DOH data.)

The death figures could actually be lower, since reporting of deaths from new coronavirus disease (COVID-19) has not been accurate. Witness the current Philippine Health Insurance Corp. scandal where there have been financial incentives to report other deaths as COVID-19 deaths.

Furthermore, the Philippine Statistics Agency has just released the official death figures for 2019 and the first half of 2020. For the same period of January to June, there were more deaths in 2019 than in 2020. The same is true for the years 2017 and 2018. If we had a virulent epidemic, there would have been more deaths for the same period in 2020. But we have no “excess deaths.”

The declining death rate and the absence of excess death tell us that the SARS-CoV-2 is not that deadly.

A global study shows that COVID-19 is about as deadly as a strong common cold. The epidemic is stopping. Reason and vigilance, not panic, should now rule. More than 250,000 Filipinos get flu every year. Pneumonia kills 57,000 Filipinos yearly. But, in both cases, no one panics and shuts down the economy.

The high infection numbers that are scaring a lot of people cannot be relied upon. The use of reverse transcription-polymerase chain reaction (RT-PCR) results in a lot of false positives. Dr. Kary Mullis, Nobel Prize laureate and inventor of the PCR, warned against using it as a diagnostic test.

This is the reason why even the DOH has reported that 99 percent of the cases are either asymptomatic or mild, and that over two-thirds of the positive cases have recovered.

Furthermore, the daily reports keep on adding up the numbers, instead of subtracting the recoveries and deaths or saying that most of the infections are mild.

In addition, the new infections are mostly coming from younger people, who, if healthy, can easily overcome the disease.

The infection numbers reported are numbers for those tested positive, mostly boosted by the increasing numbers of inaccurate tests. We may be having an epidemic of tests, not of the virus.

Furthermore, test positives do not automatically mean real infections, unless verified by doctors. In turn, real infections do not mean a death sentence. Science points to the fact of “cross-immunity.” If we had encountered coronaviruses from the past, the immunity gained can be used to ward off COVID-19. A strong immune system can also resist the disease. Both kinds of immunity account for the declining death rates.

There is also a scientific conundrum involved. There are no classic symptoms for COVID-19. Furthermore, scientists have not been able to isolate and purify the virus and establish this as the causative agent for COVID-19. The famous Koch’s Law has not been established for COVID-19. This immediately puts the RT-PCR tests in question. It is not clear what fragments of RNA identified in tests belong to SARS-CoV-2 or to other organisms that have an identical or similar RNA fragments.

Overworked doctors, nurses and others are working under great pressure and stress. This is sad. But the low death rate of the virus itself is not the major cause, as seen above. Other factors are most likely involved. Overreliance on inaccurate tests is one of them.

Lockdowns and vaccines are not necessary to solve the COVID-19 epidemic. Sweden and Iceland have shown this for the world.

Our lockdowns should be lifted now and schools re-opened, as has been done in many other countries. Focus efforts on vulnerable segments of society, not on mandatory face shields and other restrictions on human rights. The existing number of hospital beds can handle the real serious cases. Then we will have a real normal and our society can heal again. —CONTRIBUTED